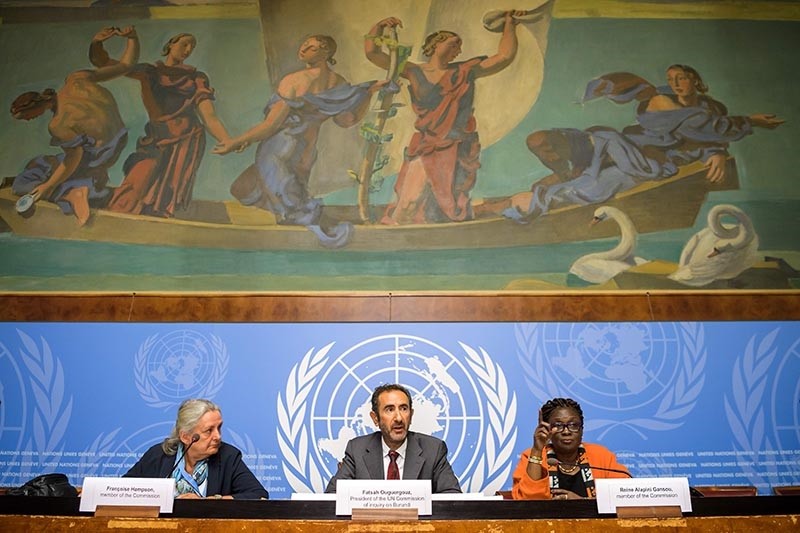 Members of the United Nations (UN) Commission of Inquiry on Burundi,Francoise Hampson of Britain, Commission Presiden Fatsah Ouguergouz of France and Reine Alapini-Gansou of Benin attend a press conference on the commission's report on September 4, 2
by Compiled from Wire Services Sep 04, 2017 12:00 am

Crimes against humanity are being committed in Burundi, according to a United Nations commission of inquiry.

Killings, torture, sexual violence, degrading treatment, enforced disappearances and arbitrary arrests have been taking place since April 2015, according to the report published Monday.

"We were struck by the scale and the brutality of the violations. We also noted a lack of will on the part of the Burundian authorities to fight against impunity and guarantee the independence of the judiciary. As a result, there is a strong likelihood that the perpetrators of these crimes will remain unpunished," said Fatsah Ouguergouz, president of the commission.

Burundi has been plagued by political violence since April 2015, when President Pierre Nkurunziza announced he would seek a disputed third term. Nkurunziza won re-election despite widespread protests and Burundi has remained volatile.

Alleged perpetrators of the violence include top officials in Burundi's National Intelligence Services and police force, military officials and members of the youth league of the ruling party, known as Imbonerakure, said the commission's report.

The harsh findings in the report have prompted human rights activists to urge the U.N. to take measures against Burundi's government.

More than 500 witnesses were interviewed during the several months of investigations, including many Burundians living abroad as refugees and others still in Burundi, often at risk to their lives, said the report.

"There is a climate of pervasive fear in Burundi. Victims have been threatened, even in exile. This meant that the commission had to be extremely careful to ensure that their testimonies could not be used to endanger them," said Françoise Hampson, from Britain, one of the three commission members.

Accounts from victims, their families and witnesses were rigorously checked and corroborated, said the report.

Burundi's government, headed by President Pierre Nkurunziza, refused to cooperate with the commission of inquiry and did not allow its members to go to the country, said the report.

"We deeply regret the Burundian government's lack of cooperation, which, among other things, made it difficult for us to document human rights abuses committed by armed opposition groups. This is all the more regrettable given that Burundi, as a member of the Human Rights Council, has an obligation to cooperate with mechanisms set up by the council," said commission member Reine Alapini Gansou, who is from Benin.

The commission urges Burundi's authorities to immediately stop serious human rights violations by state agents and Imbonerakure, over whom the state exercises control.

The commission asked the International Criminal Court to open an investigation into the crimes committed in Burundi as soon as possible. The commission also asks the African Union to help find a lasting solution to Burundi's crisis, based on respect for human rights.

The critical report calls into question whether Burundi should have a seat on the U.N. Human Rights Council, whose next session begins Sept. 11.

"Today, the U.N. Commission of Inquiry found that Burundi had committed crimes against humanity. Burundi's blatant refusal to cooperate with the commission shows its contempt of the Human Rights Council resolution creating the commission. Enough is enough," said John Fisher of Human Rights Watch, adding that the upcoming U.N. General Assembly should reconsider Burundi's membership in human rights body. "The situation in Burundi will not improve until there is an end to the impunity that lies at the heart of the crisis."

Burundi suffered a civil war from 1993 until 2006 between majority Hutus and minority Tutsis, which claimed an estimated 300,000 lives.

The current unrest has also sparked fear of a wider crisis in Africa's volatile Great Lakes region, with the 1994 genocide in neighboring Rwanda having been fuelled by similar ethnic tensions.