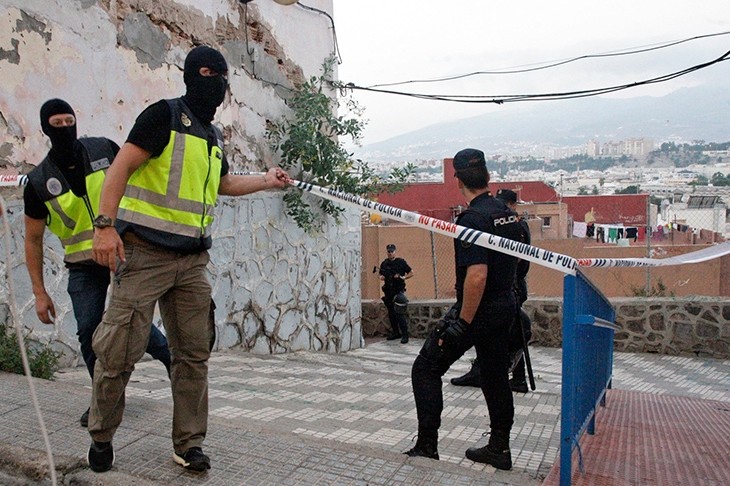 Spanish National Police agents guard the surroundings of a home during a search in Melilla, Spanish enclave on the north of Africa, Sept. 6, 2017. (EPA Photo)
by Associated Press Sep 06, 2017 12:00 am

Security forces in Spain and nearby Morocco have broken up an alleged Daesh-linked extremist cell whose six members were actively training and planning to conduct "large-scale attacks," authorities said Wednesday.

Five people were detained near the northern Moroccan city of Nador and one in the nearby Spanish enclave of Melilla, the Moroccan Interior Ministry said in a statement. The arrests came weeks after attacks by Spanish extremists with Moroccan links that killed 16 people around Barcelona.

Five of those detained on Wednesday are Moroccan and one is a Spaniard of Moroccan origin, Spain's Interior Ministry said.

The alleged leader of the cell dismantled Wednesday was a 39-year-old living in Melilla who was arrested while visiting Morocco. He allegedly recruited youngsters at a reeducation center where he worked and used Daesh group propaganda to train them, the ministry said in a statement.

Investigations found that members of the cell planned terrorist operations in Morocco and Spain, holding secret overnight meetings and carrying out training for eventual attacks with knives, the Moroccan Interior Ministry said in a statement.

The ministry said the operation comes amid a growing terrorist threat in both countries, and as Daesh pushes to multiply operations outside Iraq and Syria.

There was no suggestion of a link with the Barcelona attackers.

Since mid-2015, Spain has arrested 199 people accused of links to extremism.