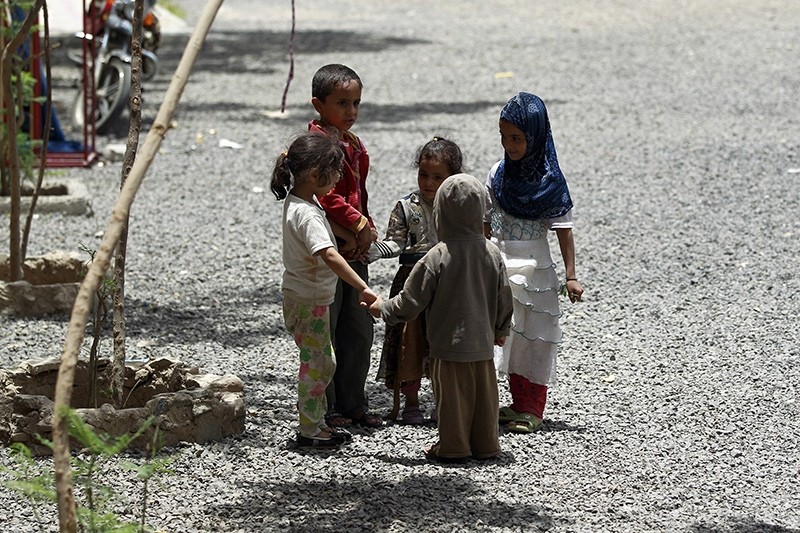 Yemeni displaced children, who fled Saada province due to fighting play at a school turned into a shelter in the capital Sanaa (AFP File Photo)
by Anadolu Agency Sep 19, 2017 12:00 am

The UN High Commissioner for Refugees (UNHCR) said in a report posted Monday on ReliefWeb that the number of internally displaced people in Yemen had reached nearly 2 million due to the ongoing conflict in the country.

It said 84 percent of the nearly 1,980,510 people have been internally displaced for over a year.

The report also said 946,044 internally displaced people had returned to their homes and 280,623 refugees and asylum seekers, mainly from Somalia and Ethiopia, are in the country.

Additionally, the report said the "UNHCR remains deeply concerned by the significant impact the escalating hostilities are having on the protection of civilians and on the increase of newly displaced persons."

The conflict in Yemen has raged since 2014, when Houthi militias and their allies overran much of the country, including the capital Sanaa.

The war has killed at least 10,000 people, destroyed Yemen's economy, caused a cholera epidemic and forced millions from their homes amid a looming famine.

ReliefWeb is the leading humanitarian information source on global crises and disasters. It is a specialized digital service of the UN Office for the Coordination of Humanitarian Affairs (OCHA).