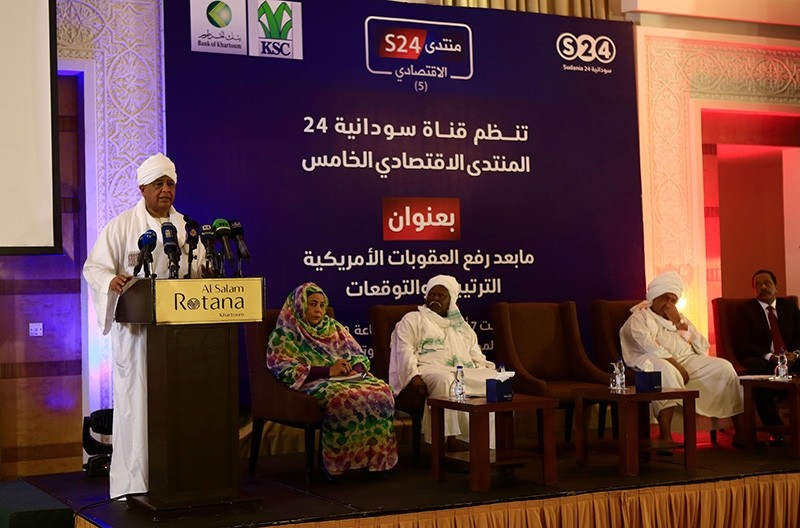 Sudanese Foreign Minister Ibrahim Ghandour addresses a panel discussion on the impact of Washington's decision to end its 20-year-old trade embargo on Sudan in Khartoum on Oct. 7, 2017. (AFP Photo)
by Compiled from Wire Services Oct 08, 2017 12:00 am

The removal of 20-year-long economic sanctions imposed by the U.S. on Sudan has been met with appraisals from the country and its neighboring region, but there is a long way before Khartoum is removed completely from the U.S. list of state sponsors of "terrorism."

The Turkish Foreign Ministry on Sunday welcomed the revocation of U.S. economic sanctions imposed on Sudan.

According to the ministry's statement, Turkey "welcomes this development that constitutes a turning point in U.S.-Sudanese bilateral relations."

"We believe that the revocation of the sanctions on Sudan will positively reflect on peace, stability and welfare in Sub-Saharan Africa", the statement said.

The statement also said Turkey appreciates all sides that contributed to the outcome and "Turkey stands ready to contribute to the normalization process of U.S. - Sudanese relations to the best of its ability."

Egypt has also welcomed the decision to lift sanctions on Sudan despite Cairo's tense ties with Khartoum over a border dispute. Egypt's endorsement of the U.S. move came in a Saturday statement by its foreign ministry.

Sudan has previously accused Egypt of opposing the lifting of U.N. sanctions on Sudan over the conflict in its western Darfur region. Cairo denies the charge.

Besides the border dispute, Egypt and Sudan are at odds over Khartoum's perceived support for the construction of a massive Nile dam in Ethiopia that Cairo fears will reduce its vital water share.

U.S. charge d'affaires to Khartoum Steven Koutsis, the top U.S. envoy in Sudan, said Saturday that conditions have to be "right" for holding talks with Khartoum on removing it from Washington's blacklist.

Khartoum consistently demands the U.S. to drop Sudan from the blacklist in return for cooperating with U.S. intelligence agencies in fighting "terrorism."

"This is something that both sides are keenly willing to discuss, but we have to be certain that conditions are right for discussions to remove (Sudan) from the list," Koutsis said at a press conference at the U.S. mission in Khartoum.

"The government of Sudan knows fully well what it has to do to remove from the list and we hope that those conditions will come soon," he said, without elaborating on what the conditions were.

On Friday, Khartoum hailed Washington's decision to end the sanctions as a "positive decision", but expressed disappointment at not being removed from the blacklist.

Sudanese officials say that having Khartoum on this list along with Syria and Iran makes it difficult to seek foreign debt relief, which has been a factor in hampering the country's economic growth.

"Discussion on removing from the state sponsors of terror was not part of our engagement under the five-track plan," Koutsis said, referring to the five conditions that Washington had insisted that Khartoum meet in return for ending the trade embargo.

"If you are talking about a dialogue on this issue it has not happened yet."

Khartoum insists that there is "no reason" for it to be on the blacklist as it has cooperated with U.S. intelligence agencies in fighting "terrorism" in the region, a claim acknowledged even by the U.S. State Department.

"This is a paradox. We are the best country cooperating on countering terrorism and at the same time we are on the list of state sponsors of terrorism," Foreign Minister Ibrahim Ghandour said Saturday.

Ghandour, who led the Sudanese team that negotiated the lifting of sanctions, said it was time to start such talks.

Speaking Saturday on a panel organized by a private television channel to discuss the lifting of U.S. sanctions, he welcomed the lifting of the trade embargo.

It was the "start of a road to build the right relations with the United States," he said.

Washington first imposed the sanctions in 1997 over Khartoum's alleged support for terrorist groups. Osama bin Laden, the slain Al-Qaeda founder, lived in Sudan between 1992 and 1996.

Following a significant improvement in relations, former U.S. president Barack Obama eased the sanctions in January before leaving office with a view to lifting them completely after a six-month review.

But in July, President Donald Trump extended the review period to October 12. On Friday, his administration decided to lift the embargo permanently.

Sudanese hopeful on removal of sanctions

Up until a few years ago, Sudanese engineer Ahmed Abdallah used to manage his family's expenses on his $400 monthly salary but he has since had to take out loans to make ends meet.

With the U.S. State Department's announcement Friday of an end to some of its toughest economic and trade sanctions on Sudan, Abdallah and his fellow Sudanese are looking forward to a brighter future.

"We've been barely able to survive as my salary cannot cover even our essential needs," the private sector employee told AFP at his home in an impoverished neighborhood of Omdurman, the twin city of Sudan's capital Khartoum.

"At times when several needs come together, it just becomes impossible," he said as his four children played outside the family's mud and brick house.

Economic conditions in Sudan have been mired in persistent fiscal deficits, high inflation and the trade embargo imposed by Washington in 1997.

The financial sanctions had put restrictions on international banking transactions, exchange of technology and spare parts, and other cumbersome trade regulations have hampered economic growth.

Hundreds of factories have either closed or barely function, as importing equipment or machine parts directly from manufacturers is cumbersome given the restrictions on transferring funds overseas.

Sudan's economy suffered a further body blow when the south split from the north in 2011 after a bitter civil war, taking with it the bulk of the country's oil revenues.

President Omar al-Bashir summarized the situation last week when he said the U.S. embargo had "weakened the state and its institutions".

For millions of Sudanese like Abdallah, it has been a fight for survival as inflation soared to 35 percent -- the result mainly of high energy prices -- putting even basic food items out of reach for some.

"Sudan lost access to new technology, because although the sanctions were imposed by the United States, even Europe and some Asian and Arab countries followed them," said Mohamed El Nair, professor of economics at Khartoum's University of El Mughtaribeen.

Although details of Washington's decision are awaited, its impact will be felt across several sectors but especially transport, education and healthcare, he said.

Sudan's aviation sector is expected to benefit hugely, El Nair added, as Airbus and Boeing had refused to provide Sudanese airlines with new planes or spare parts for existing fleets.

But the lifting of sanctions alone will not revive the economy, he said, adding that Khartoum must take measures to boost productivity.

"It has to cut expenses, fight corruption and improve the overall investment environment," El Nair said.

Prior to the secession of the south, Sudan used to attract about $5 billion in foreign investments annually. That figure has now slumped to below $2 billion on a moderate economic growth of 3.5 percent in 2016.

The International Monetary Fund has called for "bold and broad-based reforms" to kick-start economic growth.

"More needs to be done to turn the tide toward sustained macroeconomic stability and broad-based growth," it said in a recent report.

Traders in Khartoum expect their business to pick up.

"Our business fell after the price of meat rose 45 percent from last year," said Tareq Diab, manager of a Khartoum-based butcher.

Even sectors like meat production will be impacted by the lifting of sanctions, he said, as it needs new technology and imported livestock.

For Abdallah the lifting of sanctions means new jobs for tens of thousands of unemployed youths.

"New companies from France and America will come to Sudan, which means new jobs, new investments," he said. "This will increase my salary too."

Until that actually happens, it's a "balancing act" for his wife Shahinda Adel when managing household expenses.

"Our income is limited, so I just tell my children the truth that I won't be able to buy everything they want," she said.