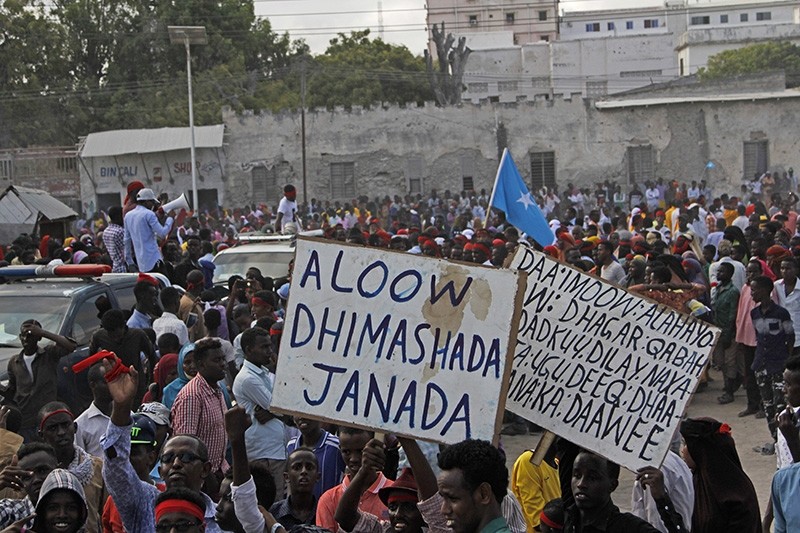 Somali protesters march in solidarity with the victims of Saturday's bombing, defying al-Shabaab. (AP Photo)
by Daily Sabah with AP Oct 20, 2017 12:00 am

Almost a week after Mogadishu's deadliest bombing, Somalis took to the streets to protest the al-Shabab terrorist group, which Somalia's government blames for the attack.

Thousands of protesters gathered at a stadium in Somalia's capital Wednesday in a show of defiance after Saturday's truck bombing that killed more than 300.

Mogadishu's mayor urged the crowd to "liberate our country from al-Shabab, so that such tragedies won't happen again."

The protesters chanted slogans against the extremist group, wearing red bandanas to show solidarity for the hundreds killed.

"It represents the blood of my people who have been killed in the explosion," said one girl at the stadium.

Crowds this large are rare in Mogadishu, as many fear being targeted by al-Shabab. This week, however, fear turned to anger.

Some think this bomb attack may be a turning point for the nation.

"We are telling [al-Shabab] that from now on, we are all soldiers and will come to you. We will no longer tolerate a Somali boy being killed and a Somali girl being killed. And we'll defend this flag."

The frustration of some at gathering resulted in more violence, as stones were thrown and guns fired, resulting in several more injured.

As more details of the attack emerge, intelligence sources believe the attack targeted a newly-opened Turkish military base where Somali soldiers are trained.

Analysts have suggested that al-Shabab, an al-Qaida ally, may have avoided taking responsibility for this attack because it did not want to be blamed for the deaths of so many civilians.

Somalia has been mired in conflict since 1991, when clan warlords overthrew a dictator then turned on each other. As one of the poorest countries in Africa, it faces severe food insecurity and relies on foreign donors to support its institutions and basic services.