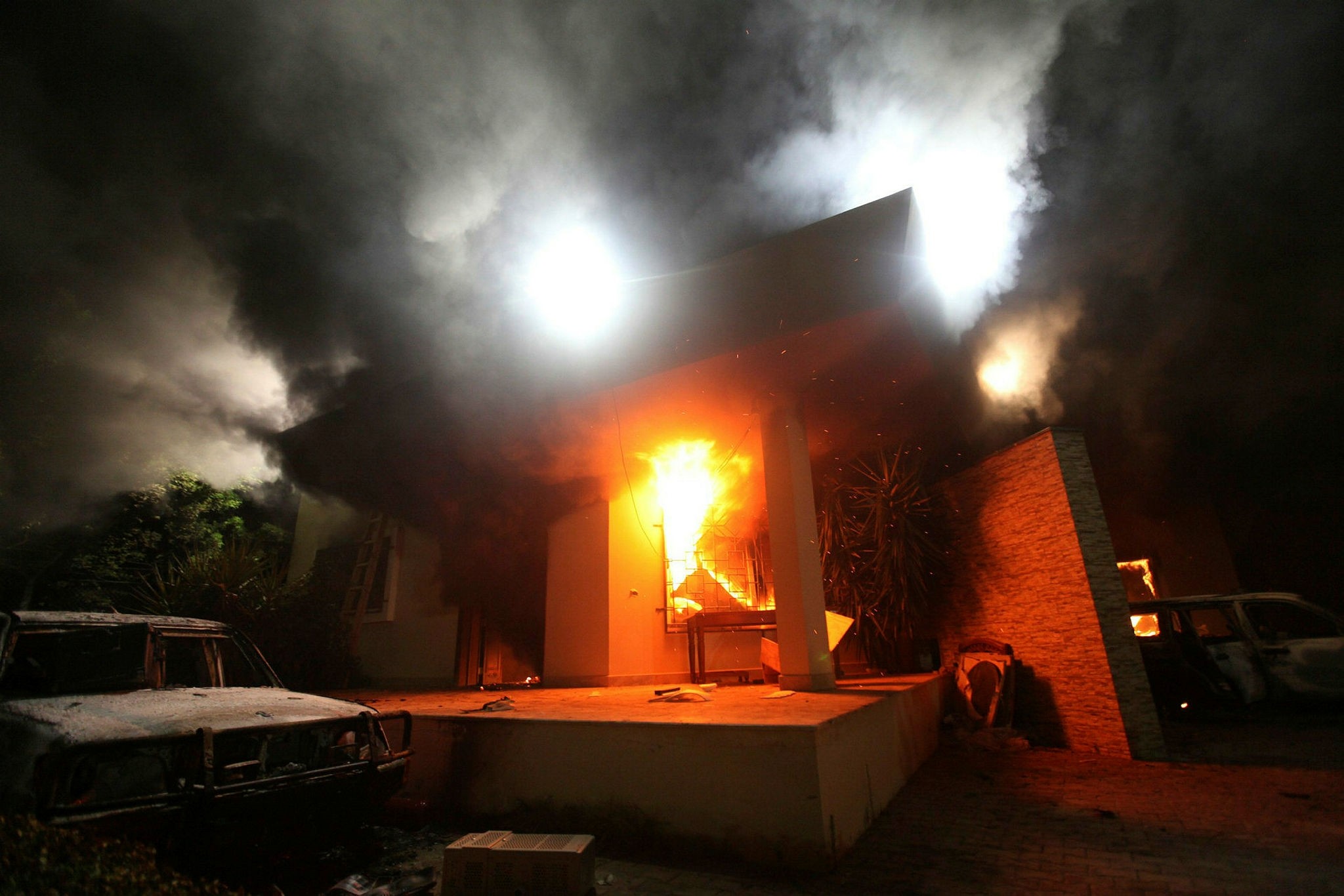 The U.S. Consulate in Benghazi is seen in flames during a protest by an armed group said to have been protesting a film being produced in the United States September 11, 2012. (Reuters Photo)
by Associated Press
Oct 30, 2017 12:00 am

U.S. special operations forces have captured a militant who was instrumental in the 2012 attack on a U.S. diplomatic compound in Benghazi, Libya, officials said Monday.

The attack resulted in the death of the U.S. ambassador to the country and three other Americans. The Obama administration's handling of the deadly assault became a lightning rod for Republican criticism of Hillary Clinton, who was secretary of state at the time, through her presidential campaign.

The commandos captured the man in Libya just before midnight local time on Sunday and are transporting him back to the U.S., the officials said. The suspect is in the custody of the Department of Justice and is expected to arrive within the next two days on a military plane, according to one of the officials. The officials said the mission was approved by President Donald Trump and done in coordination with Libya's internationally recognized government.

The officials, who weren't authorized to speak publicly to the matter and demanded anonymity, did not identify the suspect and would not say where exactly he was captured.

Stevens and Smith died in the burning diplomatic outpost despite efforts to rescue them. Woods and Doherty died nearly eight hours later in a mortar attack on a nearby CIA complex.

Earlier this month, another man accused in the attack, Abu Khattala, went on trial in federal court in Washington. Khattala has pleaded not guilty to the 18 charges against him, including murder of an internationally protected person, providing material support to terrorists and destroying U.S. property while causing death.

The attack became fodder for multiple congressional investigations to determine what happened and whether the Obama administration misled the public on the details of the bloody assault. Initial accounts provided by administration officials, notably former U.S. Ambassador to the United Nations Susan Rice, said the attack had grown out of a protest against an internet film. Later, the administration said it was a planned terrorist attack.

A two-year investigation by a House Benghazi committee focused heavily on Clinton's role and whether security at the compounds and the response to the attack was sufficient. It was the Benghazi probe that revealed Clinton used a private email server for government work, prompting an FBI investigation that proved to be an albatross in her presidential campaign.

The assault started in the evening when armed attackers scaled the wall of a U.S. diplomatic post in Benghazi and moved through the front gate. Stevens was rushed to a fortified "safe room" along with Smith, but were then siphoned off from security officers when attackers set the building and its furniture on fire. Libyan civilians found Stevens hours later in the wreckage, but he died of smoke inhalation in the hospital, becoming the first U.S. ambassador killed in the line of duty in more than three decades.

The CIA annex was then attacked by mortar fire, killing Woods and Doherty who were defending its rooftop.