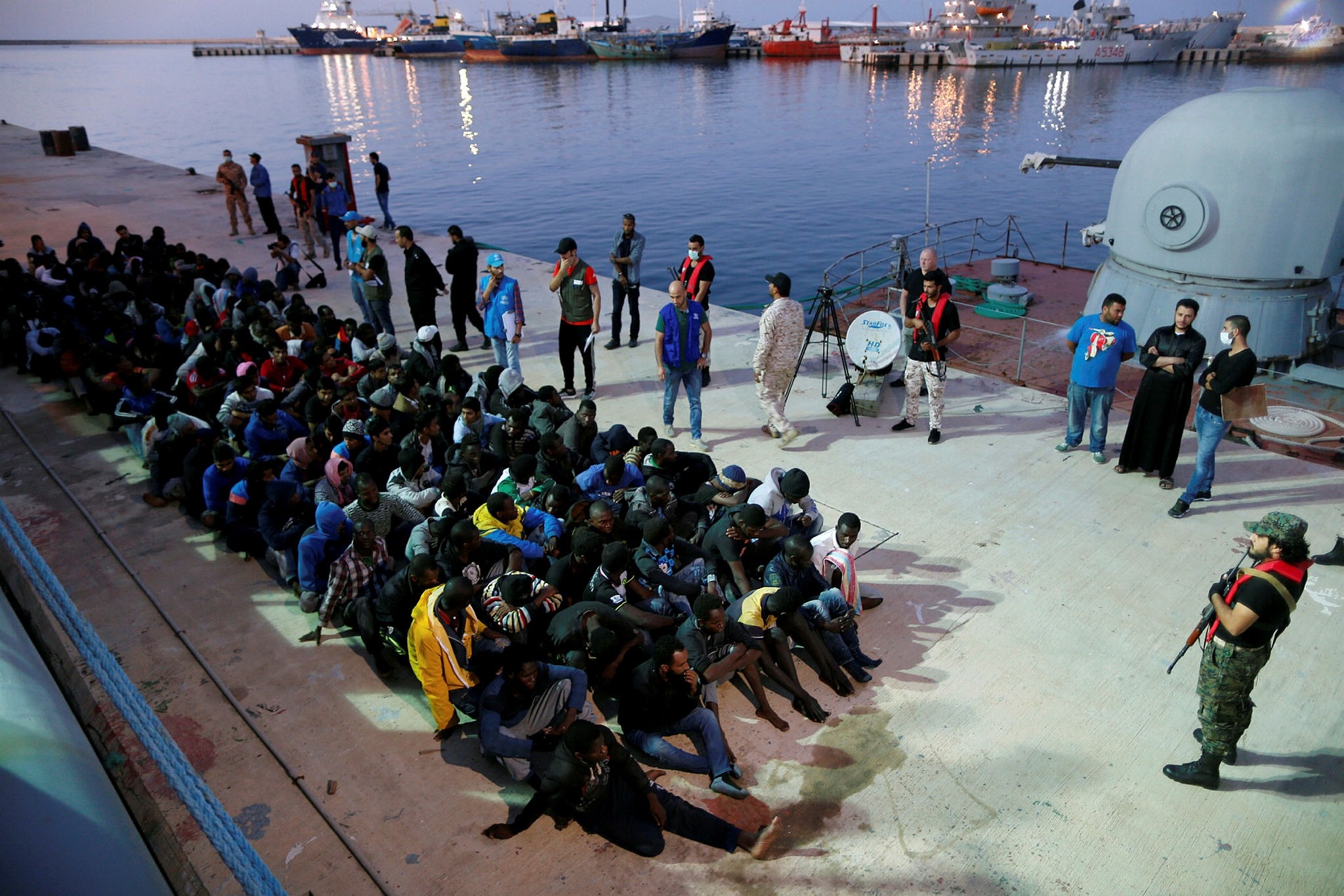 Migrants arrive at a naval base after they were rescued by the Libyan navy, Tripoli, Nov. 4.
by Compiled from Wire Services
Nov 15, 2017 12:00 am

The United Nations has slammed the detention system for migrants in Libya assisted by the European Union, which exposes them to torture, rape and forced labor

The European Union's policy of helping the Libyan authorities intercept migrants in the Mediterranean and return them to "horrific" prisons in Libya is "inhuman", the United Nations said yesterday.

"The suffering of migrants detained in Libya is an outrage to the conscience of humanity," the U.N. human rights chief Zeid Ra'ad Al Hussein said in a statement.

"The European Union's policy of assisting the Libyan Coast Guard to intercept and return migrants in the Mediterranean [is] inhuman," he said.

Chaos-ridden Libya has long been a major transit hub for migrants trying to reach Europe, and many refugees and migrants have fallen prey to serious abuse there at the hands of human traffickers and others.

Zeid warned that an already dire situation in the country "has now turned catastrophic." "The detention system for migrants in Libya is broken beyond repair," he said, adding that "the international community cannot continue to turn a blind eye to the unimaginable horrors endured by migrants in Libya, and pretend that the situation can be remedied only by improving conditions in detention."

The U.N. rights office condemned the EU and Italy for helping the Libyan coast guard intercept migrant boats in the Mediterranean, despite concerns that this could condemn more migrants to detention, exposing them to torture, rape and forced labor.

"Those detained have no possibility to challenge the legality of their detention, and no access to legal aid," yesterday's statement said.

According to Libya's Department of Combatting Illegal Migration (DCIM) 19,900 people were being held in facilities under its control in early November, up from about 7,000 in mid-September. The huge hike came after authorities detained thousands of migrants previously held by smugglers in the Libya's people-trafficking hub Sabratha, to the west of Tripoli.

The sea crossing from Libya to Italy, operated by people-smugglers based in the North African country, is now the main route for migrants bound for Europe. In Libya, the turmoil engulfing this North African country has become a death trap for thousands of migrants, most of them from sub-Saharan African countries, seeking to escape poverty and find a better life in Europe.

About 600,000 migrants, mainly from sub-Saharan Africa, have made it to Italy since 2014, the main arrival point in Europe for people fleeing conflict, persecution and poverty in Africa. But after three years of mass arrivals, the number has fallen sharply since July, when Rome struck a deal with Libya to block what had become a lucrative route for people smugglers.

A German newspaper has published a list of 33,293 people it says died while trying to immigrate to Europe between 1993 and May of this year, according to AP. The list, published by daily Der Tagesspiegel last Thursday, covered 46 pages and included names, ages and countries of origin, when available, as well as how the victims died and their date of death. Often, though, they never were identified.

The newspaper said it wanted to document, "the asylum-seekers, refugees and migrants who died since 1993 as a consequence of the restrictive policies of Europe on the continent's outer borders or inside Europe." Some of the immigrants who succeeded in reaching Europe later died in violent attacks or killed themselves in custody while waiting to be deported back to their home countries.

"We want to honor them" Der Tagesspiegel wrote. "And at the same time we want to show that every line tells a story...and that the list keeps getting longer, day by day." The vast majority of the people on the newspaper's list drowned on the Mediterranean Sea while trying to make their way to Europe.