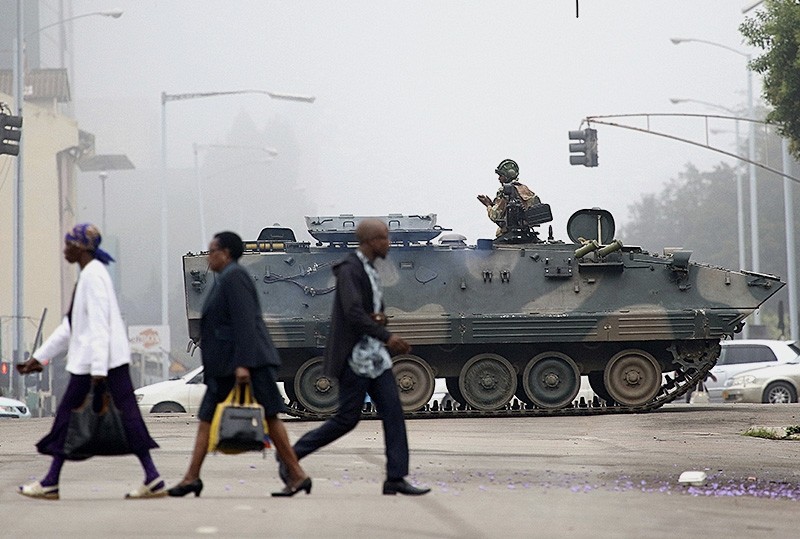 Zimbabwe's President Robert Mugabe and his family have been detained following military intervention in capital Harare, which an army spokesman and the ruling party insisted Wednesday was "not a coup."

For the first time, this southern African nation is seeing the military oppose the 93-year-old Mugabe, the world's oldest head of state and one of the longest-serving authoritarian rulers. Mugabe has been in power since Zimbabwe's independence from white minority rule in 1980.

South Africa's president said he spoke with Mugabe, who was "fine" but confined to his home.

Military officers appeared on television early Wednesday to make a statement saying they were "targeting criminals" around President Robert Mugabe.

"Last night the first family was detained and are safe, both for the constitution and the sanity of the nation this was necessary," the Zanu-PF tweeted. "Neither Zimbabwe nor Zanu are owned by Mugabe and his wife. Today begins a fresh new era and comrade Mnangagwa will help us achieve a better Zimbabwe."

The Twitter statement insisted the military move was not a coup.

"Zimbabwe has not had a coup. There has been a decision to intervene because our constitution had been undermined, in the interim Comrade E. Mnagngawa will be president of Zanu-PF as per the constitution of our revolutionary organization."

Hours earlier, soldiers had seized control of the Zimbabwe Broadcasting Corporation in the capital, Harare.

Spokesman Maj. Gen. Sibusiso Moyo said the military were not taking power and told viewers the president and his family were safe and their security was "guaranteed."

"As soon as we have accomplished our mission, we expect that the situation will return to normalcy," he said, adding: "We wish to make this abundantly clear this is not a military takeover of government."

Referring to Mugabe, who has held power since 1980, he said: "We are only targeting criminals around him who are committing crimes that are causing social and economic suffering in the country in order to bring them to justice."

The head of Zimbabwe's influential war veterans association, once a staunch supporter of Mugabe, said they stand with the army and that Mugabe should be recalled as president and ruling party leader.

Secretary General Victor Matemadanda told reporters that the ruling party should establish a commission of inquiry into Mugabe and why he decided to let his wife insult veterans and the armed forces.

The army has been praised by the nation's war veterans for carrying out "a bloodless correction of gross abuse of power." The military will return Zimbabwe to "genuine democracy" and make the country a "modern model nation," said Chris Mutsvangwa, chairman of the war veterans' association, told The Associated Press in Johannesburg.

Mutsvangwa hailed the military's overnight move as the "correction of a state that was careening off a cliff" and said the military administration would usher in a "better business environment" after years of disinvestment and economic decline.

He called Wednesday for South Africa, southern Africa and the West to re-engage with Zimbabwe after the military seized power from 93-year-old President Robert Mugabe.

The incident began Tuesday evening when rumors of a coup or military show of force circulated as tanks and armored vehicles were seen heading toward Harare.

In addition to the TV station, the military also sealed off the presidential offices with tanks.

Speaking from a written statement, Moyo told soldiers that all leave was cancelled and ordered them to return to barracks.

He urged the public to remain calm and limit unnecessary movement but to continue normal life as much as possible.

"Our wish is that you will enjoy your rights and freedoms and that we return our country to a dispensation that allows for investment, development and prosperity that we all fought for and for which many of our citizens paid the supreme sacrifice," he said.

The military's intervention came after a period of unrest within Mugabe's ruling Zanu-PF. Last week, Vice President Emmerson Mnangagwa was sacked amid a dispute over who would succeed the 93-year-old president.

Mnangagwa had previously been seen as Mugabe's successor but was replaced by the president's wife, Grace Mugabe, as the favorite, resulting in a split in the Zanu-PF.

The vice president's removal led to army chief Gen. Constantino Chiwenga on Monday warning that the military was prepared to intervene to end purges within the party.

He warned against targeting "members of the party with a liberation background" -- a reference to Zimbabwe's struggle against white minority rule in the 1970s. Mnangagwa is a veteran of the liberation war.

This led to the party accusing Chiwenga of "treasonable conduct."

The U.S. Embassy closed to the public Wednesday and encouraged citizens to shelter in place, citing "the ongoing political uncertainty through the night." The British Embassy issued a similar warning, citing "reports of unusual military activity."

South African President Jacob Zuma said he was sending his ministers of defense and state security to Zimbabwe to meet with Mugabe and the military there. He said he hopes Zimbabwe's army will respect the constitution and that the situation "is going to be controlled."