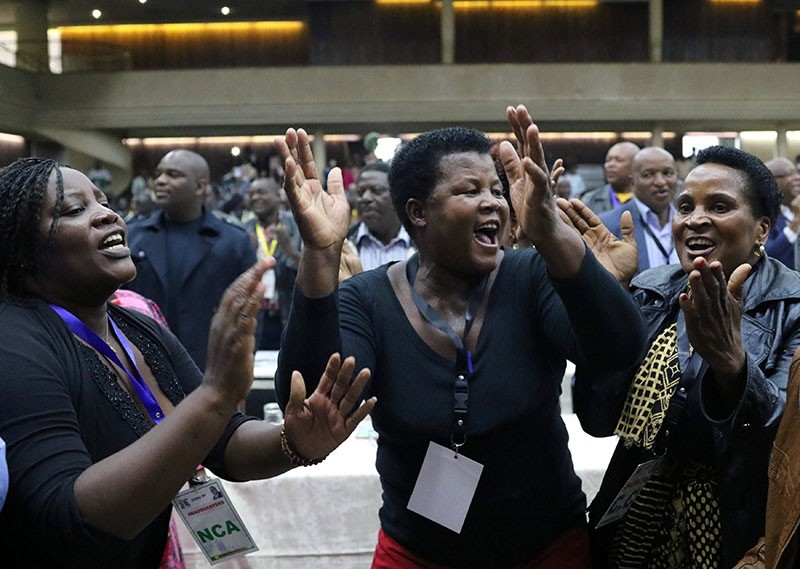 Delegates celebrate after Zimbabwean President Robert Mugabe was dismissed as party leader at an extraordinary meeting of the ruling ZANU-PF's central committee in Harare, Zimbabwe November 19, 2017. (Reuters Photo)
by Associated Press Nov 19, 2017 12:00 am

Clinging to his now virtually powerless post, longtime Zimbabwe President Robert Mugabe was fired as ruling party chief to cheers Sunday, and was set to discuss his expected exit with the army commander who put the world's oldest head of state under house arrest days ago.

A day after huge crowds rallied peacefully in the capital, Harare, for the 93-year-old Mugabe to go, members of the ruling party's Central Committee stood, cheered and sang as Mugabe was recalled. Meeting chair Obert Mpofu referred to him as "outgoing president."

The meeting also replaced Mugabe as party chief with the vice president whose firing nearly two weeks ago led the military to step in, and recalled "forever" the unpopular first lady as head of the women's league, party member Chris Mutsvangwa confirmed.

That former vice president, Emmerson Mnangagwa, is expected to lead a new government after his formal election as ruling party chief next month. Without the military's intervention, first lady Grace Mugabe likely would have replaced him as vice president and been in a position to succeed her husband. 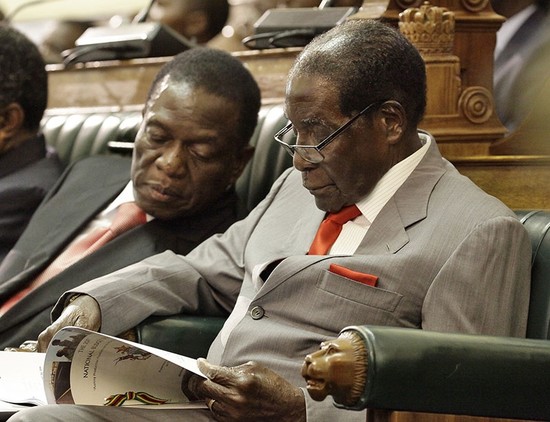 Zimbabwean President Robert Mugabe (R) is flanked by his then deputy Emmerson Mnangagwa (L) as he reads a copy of the country's 2017 National Budget in the house of parliament, in Harare, Zimbabwe, Dec. 08, 2016. (EPA Photo)

Impeaching the president is the next step when Parliament resumes Tuesday, and lawmakers will "definitely" put the process in motion, the main opposition's parliamentary chief whip told The Associated Press.

Innocent Gonese with the MDC-T party said they had been in discussions with the ruling ZANU-PF party to act jointly.

"If Mugabe is not gone by Tuesday, then as sure as the sun rises from the east, impeachment process will kick in," Gonese said.

Mugabe's talks with army commander Constantino Chiwenga are the second round of negotiations on an exit as the military tries to avoid accusations of a coup.

Zimbabwean officials have not revealed details of the talks, but the military appears to favor a voluntary resignation by Mugabe to maintain a veneer of legality in the political transition. Mugabe, in turn, could be using whatever leverage he has left to try to preserve his legacy as one of Africa's liberation leaders or even protect himself and his family from possible prosecution.

Mutsvangwa, head of the country's liberation war veterans, said he was concerned that the military could end up opening fire to protect Mugabe from protesters. He vowed to "bring back the crowd" if the president didn't step aside.

"We would expect that Mugabe would not have the prospect of the military shooting at people, trying to defend him," Mutsvangwa said. "The choice is his."

The negotiations come ahead of a key ruling party congress next month, as well as scheduled elections next year.

Sunday's talks do not appear to include the South African government delegation that took part in the first round. South Africa's president on Saturday said talks are in "early days." The southern African regional bloc will hold a four-country summit in Angola on Tuesday to discuss the Zimbabwe situation.

Mugabe finds himself increasingly isolated under house arrest in his lavish Blue Roof mansion, deserted by most of his allies, with others arrested.

On Saturday, most of Harare's population of 1.6 million poured into the streets in an anti-Mugabe demonstration that just days ago would have brought a police crackdown.

They clambered onto tanks moving slowly through the crowds, took selfies with soldiers and surged in the thousands toward the State House building where Mugabe held official functions, a symbol of the rule of the man who took power after independence from white minority rule in 1980.

The euphoria came after years of watching the once-prosperous African nation fall into decay, with a collapsing economy, repression of free speech, disputed elections and international sanctions.

Even as concerns remained about who next would be in charge and what freedoms might be available if the military lingers in power — or if Mnangagwa succeeds his longtime ally Mugabe as leader — people reveled in the rare chance to express themselves freely.

Let us have this moment, Zimbabweans said. If the next leader becomes trouble, they vowed to return to the streets again.