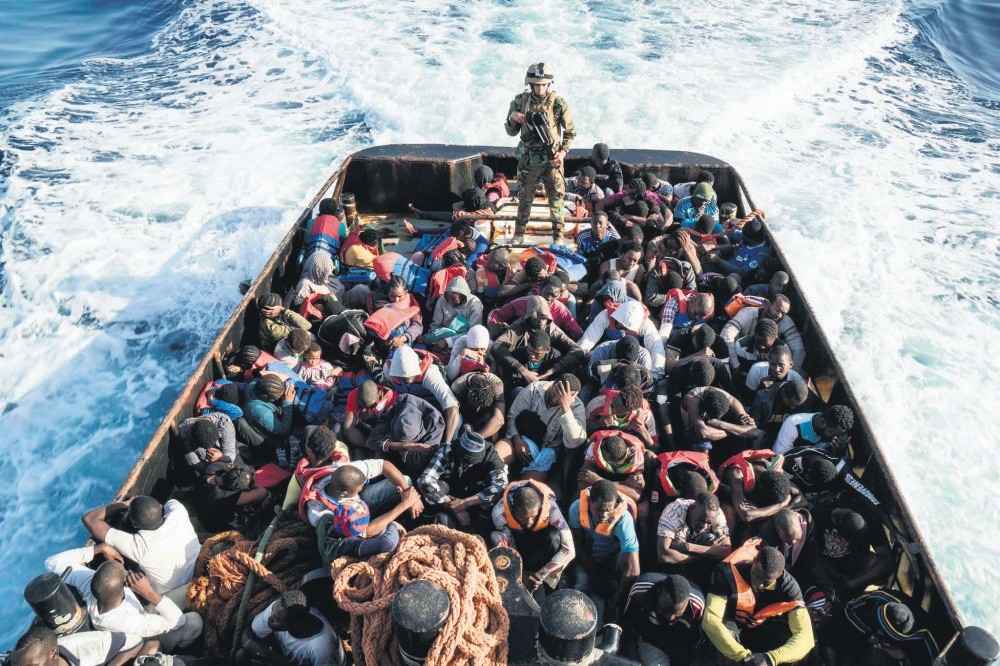 A Libyan coast guardsman stands on a boat during the rescue of migrants attempting to reach Europe off the coastal town of Zawiyah, Libya, June 27.
by Compiled from Wire Services Dec 13, 2017 12:00 am

European governments are complicit in grave human rights violations in Libya through their support of authorities there that often work with human smugglers, Amnesty International reported

European Union countries are complicit in the abuse of migrants held in Libya, Amnesty International said in a report released yesterday that accused the EU of turning a blind eye to allegedly brutal tactics of the Libyan coast guard and dangerous detention facilities.

"European governments are knowingly complicit in the torture and abuse of tens of thousands of refugees and migrants detained by Libyan immigration authorities in appalling conditions in Libya," the rights group said in a report, according to Agence France-Presse (AFP).

It accused European governments of "actively supporting a sophisticated system of abuse and exploitation of refugees and migrants by the Libyan coastguard, detention authorities and smugglers in order to prevent people from crossing the Mediterranean.""Hundreds of thousands of refugees and migrants trapped in Libya are at the mercy of Libyan authorities, militias, armed groups and smugglers often working seamlessly together for financial gain," said John Dalhuisen, Amnesty's Europe director.

"European governments have not just been fully aware of these abuses; by actively supporting the Libyan authorities in stopping sea crossings and containing people in Libya, they are complicit in these abuses."

Dalhuisen urged European governments to "rethink their cooperation with Libya on migration and enable people to get to Europe through legal pathways, including by resettling tens of thousands of refugees."

Overwhelmed by the arrival of more than 1 million migrants in 2015, the EU has worked with Libya and its neighbors to cut off the main migration route from Africa to Europe. Its strategy has included training and equipping Libya's coast guard to stop boats trying to make the dangerous Mediterranean Sea crossing. The moves have trapped an estimated 20,000 migrants in Libya, where detention facilities are overcrowded and unsanitary, Amnesty International said.

EU officials have rejected criticism of Europe's approach to curbing immigration and say the bloc's money has been channeled into Libya through United Nations agencies, as reported by the Associate Press (AP). Only about 150 of Libya's 3,000 coast guard members have received training sponsored by the bloc, the EU said.

The EU's border agency, Frontex, reported Monday that the number of migrants making it to Europe through the central Mediterranean route from Libya to Italy dropped by one-third during the first 11 months of the year, to around 116,400, compared to the same period in 2016. Most were Nigerians, Frontex said.

In Libya, many migrants are detained, tortured, and even killed, according to the U.N. International Organization for Migration (IOM). At least 20,000 migrants are being detained in Libya, which is the main gateway for Africans to reach Europe, according to the IOM. Images broadcast by CNN earlier this month appeared to show migrants being auctioned off as slaves by Libyan traffickers, sparking outrage in Europe and anger in Africa. Numbers of detainees swelled after boat departures for Italy from the smuggling hub of Sabratha were largely blocked this year. The EU, U.N. and African Union agreed last month to an emergency plan to dismantle people smuggling networks and repatriate stranded migrants in an effort to ease a human rights disaster in Libya.