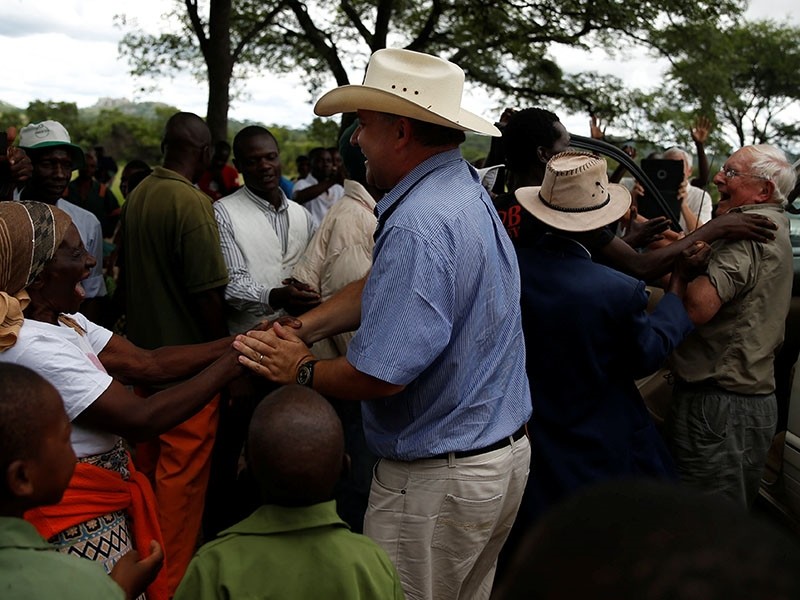 Commercial farmers Rob Smart and his son Darreyn are welcomed at Lesbury Estates by village elders and children at a farm in Headlands communal lands east of the capital Harare, Zimbabwe, Dec. 21, 2017. (Reuters Photo)
by Associated Press Dec 22, 2017 12:00 am

A white Zimbabwean farmer evicted by the government of Robert Mugabe has returned to a hero's welcome as the first to get his land back under the new president, in a sign of reform on an issue that had hastened the country's international isolation.

With a military escort, Robert Smart made his way into Lesbury farm about 200 kilometers (124 miles) east of the capital, Harare, on Thursday to cheers and song by dozens of workers and community members.

Such scenes were once unthinkable in a country where land ownership is an emotional issue with political and racial overtones.

"We have come to reclaim our farm," sang black women and men, rushing into the compound.

Two decades ago, their arrival would have meant that Smart and his family would have to leave. Ruling ZANU-PF party supporters, led by veterans of the 1970s war against white minority rule, evicted many of Zimbabwe's white farmers under an often violent land reform program led by Mugabe.

Whites make up less than 1 percent of the southern African country's population, but they owned huge tracts of land while blacks remained in largely unproductive areas.

The evictions were meant to address colonial land ownership imbalances skewed against blacks, Mugabe said. Some in the international community responded with outrage and sanctions.

Of the roughly 4,500 white farmers before the land reforms began in 2000, only a few hundred are left.

But Mugabe is gone, resigning last month after the military and ruling party turned against him amid fears that his wife was positioning herself to take power. New President Emmerson Mnangagwa, a longtime Mugabe ally but stung by his firing as vice president, has promised to undo some land reforms as he seeks to revive the once-prosperous economy.

Smart is the first to have his farm returned. On Thursday, some war veterans and local traditional leaders joined farm workers and villagers in song to welcome his family home.

In a flash, dozens followed her. Some ululated, and others waved triumphant fists in the air.

"I am ecstatic. Words cannot describe the feeling," Darryn told The Associated Press.

Smart's return, facilitated by Mnangagwa's government, could mark a new turn in the politics of land ownership. During his inauguration last month, Mnangagwa described the land reform as "inevitable," calling land management key to economic recovery.

Months before an election scheduled for August 2018 at the latest, the new president is desperate to bring back foreign investors and resolve a severe currency shortage, mass unemployment and dramatic price increases.

Zimbabwe is mainly agricultural, with 80 percent of the population depending on it for their livelihoods, according to government figures.

"I am advising our members to be patient and give it time. But I do see many of them going back into farming," said Peter Steyl, the union's vice president. "The government seems serious about getting agriculture on track but how it is going to achieve this, I don't know."

The firmness with which the government ensured Smart's return signaled resolve.

At the farm, a soldier sat quietly in a van that acted as an escort for the family. His services were not needed. The people gathered there share deep social bonds with the family, away from the politics of race and elections.

"I have known this boy since day one," said 55 year-old Sevilla Madembo. "He was born here. I took care of him when he was young. He is back to take care of me now that I am old."

She was born at the farm, which was home to her parents and grandparents.

"We are part of one family. We belong to the Tandi people. That's why we are going to perform a traditional African ceremony before we start on production," Darryn said, going through the farmhouse.

Locks to some rooms had been changed by the "new owner," a cleric with close ties to Mugabe's family who has since lost his claim. Other rooms had been ransacked and most property was missing.

Left untouched on the walls were a portrait of former British Prime Minister Winston Churchill and a photo of Zimbabwe's last colonial leader, Ian Smith, officiating at an agricultural fair.

Local chief Peter Tandi led efforts to lobby Mnangagwa's administration to allow Robert Smart to return. "He voluntarily gave up his estates to the community when the land reform program started. He continued helping us with technical knowledge, equipment and other inputs," Tandi said.

"That man supported the guerrillas during the war. ... He gave us a place to hide from colonial government soldiers," said Gift Maramba, a war veteran and local ZANU-PF official.

Smart and his son held back tears while greeting familiar faces. Others were keen to get on with business.

"Hey Darryn, I want us to talk about my beans I stored in your warehouse," one villager said.

"We can discuss that later, man. Come on, for now let's just be happy to be with each other again," Darryn replied.