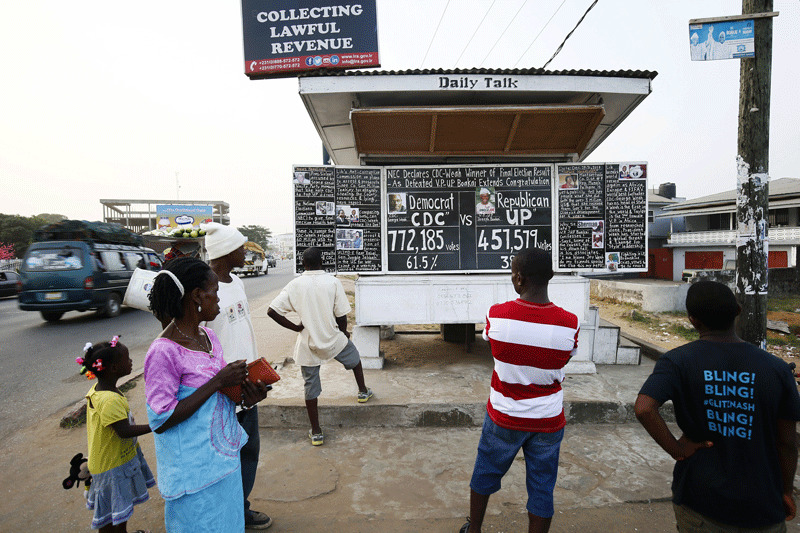 Liberians read final results of the runoff presidential elections from a u2018Daily Talku2019 chalkboard by a roadside in Monrovia, Liberia (EPA Photo)
by Daily Sabah Jan 03, 2018 12:00 am

Liberians have been receiving their news written in clear, bold white chalk lettering from a public blackboard by a roadside in Liberia's capital Monrovia for the past 17 years.

In a country where many people can't afford to buy newspapers or a TV set, the "Daily Talk" offers free news, which is written in Liberian English, or simple English, as it's called there, to ensure that all Liberians can understand and follow the "newspaper."

The board's founder Alfred Sirleaf has been "writing" domestic and international news on a black chalkboard since 2000, three years before the civil war ended, aiming to keep people in his city informed.

Sirleaf said he does not have any significant source of revenue or funding, except a few advertisements that he adds to his board, and uses his own money and some donations to keep the Daily Talk going.

Despite the difficulties, he says that keeping Monrovia informed keeps him on his toes.

"I have a passion for informing the public," Sirleaf said.

Sirleaf said a team of seven people is operating the newspaper, adding that volunteer journalists also send their news from different parts of the country.

Underlining the fact that the Daily Talk has no difference from the usual newspapers in terms of publication and content, Sirleaf stated that the news is written according to the 5W1H rule.

Operating out of a plywood shack on a run-down roadside in capital Monrovia, the Daily Talk has become an established news source for thousands of impoverished Liberians.