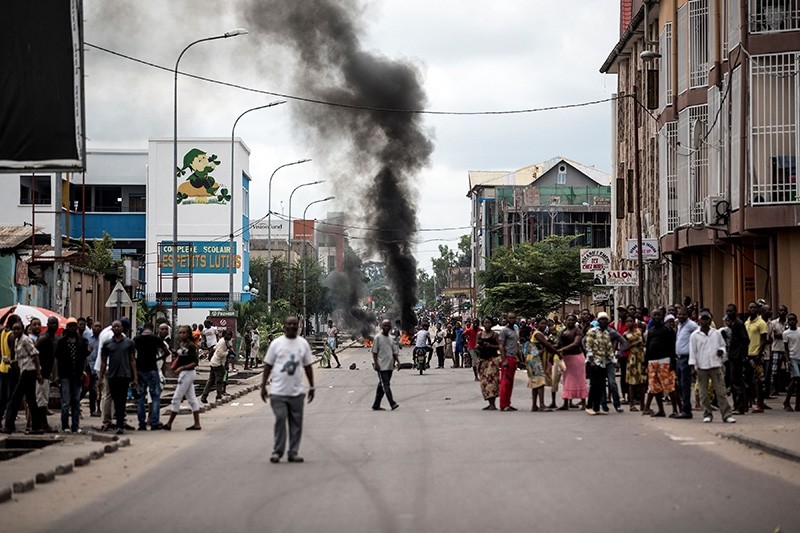 People look on as protesters burn tires during a demonstration calling for the President of the Democratic Republic of the Congo (DRC) to step down on Jan. 21, 2018 in Kinshasa. (AFP Photo)
by Jan 21, 2018 12:00 am

Six people were killed Sunday in the Democratic Republic of Congo, the U.N. said, as authorities cracked down on a banned protest against President Joseph Kabila.

The U.N. peacekeeping mission MONUSCO said six people were killed in Kinshasa and 49 others injured nationwide in anti-Kabila rallies.

MONUSCO said 94 people were arrested across the country.

A spokesman for the national police told state television that "two people were killed" in the capital, while nine policemen were wounded, two of them seriously.

Of the two killed according to the authorities' toll, one was shot at close range by a police officer, the presidency's spokesman Yvon Ramazani said in a call to AFP.

"The policeman is under arrest and must be brought to justice," he said.

A 16-year-old girl died after shots were fired from an armored vehicle at the entrance to a church in the Kitambo area of the capital, Jean-Baptise Sondji, a former minister and government opponent, told AFP.

"An armored car passed in front of the church. They began firing live bullets, I protected myself," Sondji, who is also a doctor, said by telephone.

"A girl who was at the left side door of the church was hit by a bullet," he said, adding that she was already dead when she was taken by taxi to hospital.

Government minister Felix Kabange Numbi told AFP that "hundreds of people recruited by the parish priest of Saint-Christophe tried to enter" his residence.

"My guard fired warning shots before the arrival of reinforcements who arrested 145 people," he said.

Tensions were also reported by AFP journalists in the major cities of Kisangani, Lubumbashi, Goma, Beni and Mbuji Mayi.

The internet, email and social media messaging networks were cut in the capital ahead of the march.

The church had called for rallies around the country despite a government ban on all demonstrations since September 2016, when anti-Kabila protests turned violent.

The head of the Muslim community, Cheikh Ali Mwinyi M'Kuu, had urged the authorities Saturday to allow the march to take place.

"If they decide to repress, there will be no peace. But if they let the march take place, they will respect the constitution and peace will prevail."

The previous anti-Kabila march, on Dec, 31, descended into a bloody crackdown after police and security forces opened fire on demonstrators.

Protest organizers said 12 people were killed, while the United Nations reported at least five dead. The authorities said no deaths that day were linked to the demonstration.

The country's powerful Catholic Church, one of the few institutions to enjoy broad credibility nationally, condemned what it called "barbarism." The U.N. and France also sounded their concern over the death toll.

A group of eight intellectuals have joined the Church in calling for the march to be peaceful.

The so-called "secular committee of coordination" has called on people to march after mass "with our peace branches, our bibles, our rosaries, our crucifixes, to save the Congo."

Arrest warrants have been issued against at least five members of the committee, a magistrate told AFP, prompting them to go into hiding.

The committee has called for the release of political prisoners, to allow the return of exiled political opponents and, above all, a guarantee that Kabila will stand down and not seek a third term.

The president, 46, has been in power since 2001, at the helm of a regime widely criticized for corruption, repression and incompetence.

His constitutional term in office expired in December 2016 but he stayed on, stoking a bloody spiral of violence.

Under an agreement brokered by the Catholic Church, he was allowed to stay in office provided new elections were held in 2017.

The authorities later blamed organizational problems for a new delay until Dec. 23, 2018 -- a postponement that has angered Western nations, but one that they have reluctantly accepted.