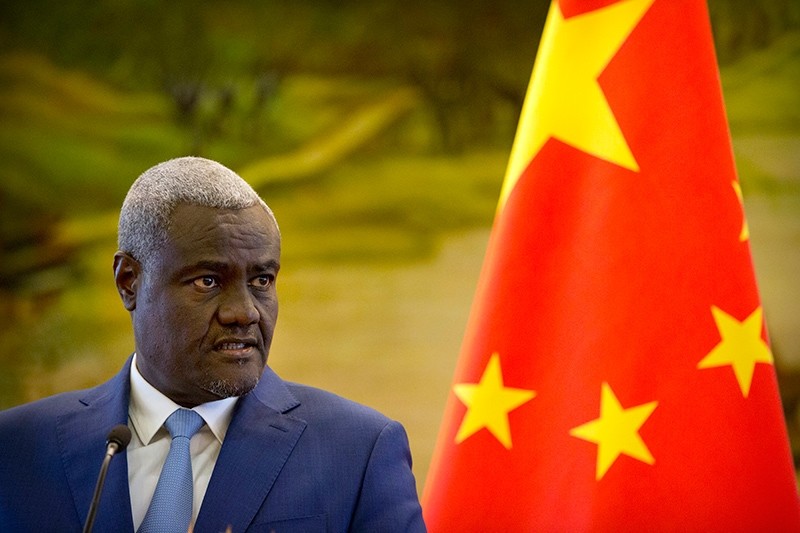 Chairman of the African Union Commission Moussa Faki Mahamat speaks during a joint press conference with Chinese Foreign Minister Wang Yi at the Ministry of Foreign Affairs in Beijing, Thursday, Feb. 8, 2018. (AP Photo)
by Feb 08, 2018 12:00 am

The African Union's chairman dismissed during a visit to Beijing on Thursday a French newspaper report alleging that China had spied on the continental body as "lies" intended to derail cooperation.

The report published by Le Monde in January claimed technicians at the AU's Chinese-built headquarters in the Ethiopian capital discovered last year that the contents of their computers had been regularly copied to servers in Shanghai since 2012, citing unnamed AU sources.

"I don't see it is in the interest of China to spy," AU commission chairman Moussa Faki Mahamat said during a visit to Beijing, where he met with Chinese Foreign Minister Wang Yi to discuss deepening cooperation on a variety of issues, as well as opening a representative office in Beijing.

Standing next to Wang, he told reporters that the allegations were "all lies," adding that no story "can distract us or divert us from our relations."

The AU is not dealing with "secrets or defense," he said, and "I don't see how it is in the interest of China to offer such a building and spy."

For his part, Wang said the AU conference center is "a symbol of Chinese-African friendship" and that China had "selflessly" built the building.

Some people, he said, "are jealous of China-Africa cooperation," suggesting that the report was an attempt to wrong-foot the relationship.

Le Monde said the AU's servers were changed and its IT systems redone after the copying was found.

The newspaper also reported that Ethiopian cyber security experts removed microphones hidden in the desks and walls of the headquarters.

China is deeply invested in Africa, regularly offering low-interest loans and gifts to individual nations and doing $149.2 billion (120.3 billion euros) in trade with the continent in 2016.