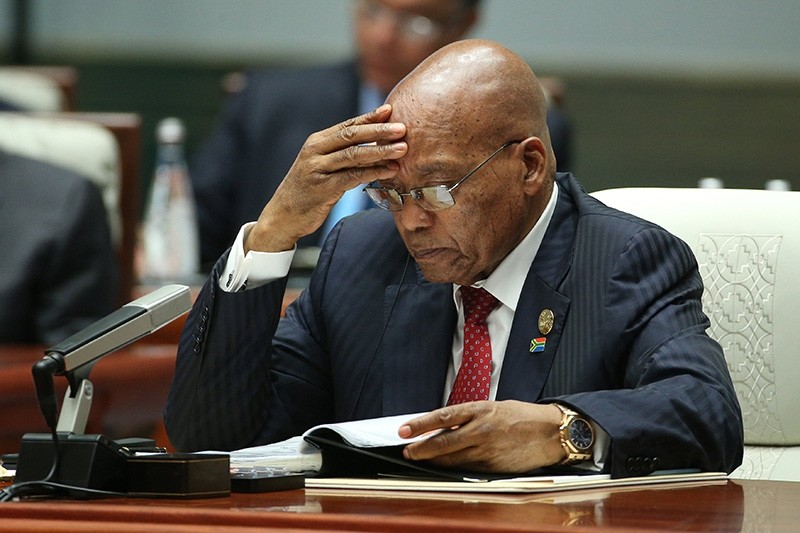 This file photo shows South African President Jacob Zuma attending the 'Dialogue of Emerging Market and Developing Countries' on the sidelines of the 2017 BRICS Summit in Xiamen, Fujian province, China, Sep. 05, 2017 (EPA Photo)
by Feb 13, 2018 12:00 am

The power struggle over Zuma's departure put the president at loggerheads with Cyril Ramaphosa, his expected successor, who is the new head of the African National Congress.

The party's powerful 107-member national executive committee (NEC) met for 13 hours at a hotel outside Pretoria, and decided in the early hours of Tuesday to "recall" Zuma from his post.

Ramaphosa and Ace Magashule, the party's secretary-general, had personally delivered a request for Zuma to resign to the president's official residence in Pretoria at about midnight.

But Zuma "was very arrogant. He told them he was not going anywhere as he did nothing wrong," an unnamed ANC committee member told the Mail and Guardian newspaper.

"He told them if the ANC issued a statement on its decision to recall him, he will retaliate."

Another committee member told AFP that Zuma's response was "hogwash" and that the president had asked for three more months in office.

"We just felt he meant three months of looting," the source said, speaking on condition of anonymity as he confirmed that the meeting had demanded Zuma's resignation.

The ANC -- which was once led by anti-apartheid struggle leader Nelson Mandela -- reportedly gave Zuma 48 hours to step down.

ANC officials were not reachable Tuesday, but the party called a press conference for 2:00 pm (1200 GMT) at its headquarters in Johannesburg.

The ANC can "recall" the head of state, essentially forcing him to resign, but the process is a party-level instruction and he is under no constitutional obligation to obey.

If he refuses, Zuma would then likely be ousted via a parliamentary vote of no-confidence within days.

Ramaphosa, the de facto president-in-waiting, has been in deadlocked negotiations with Zuma, who first dismissed a request from party leaders to resign more than a week ago.

The stalemate has plunged South Africa -- Africa's most developed economy -- into uncertainty over who is running the country, with a series of public events canceled last week including the annual State of the Nation address to parliament.

"We know you want this matter to be finalized," Ramaphosa, 65, told a party rally in Cape Town on Sunday to loud cheers.

"We know you want closure... Because our people want this matter to be finalized, the NEC will be doing precisely that."

South African opposition parties have called for early elections as the ANC's leadership battle grinds on.

An opposition request for a no-confidence vote against Zuma, 75, this week was still being considered by the parliamentary Speaker.

Zuma's presidency has been marred by corruption scandals, slow economic growth and record unemployment that have fueled public anger.

He was scheduled to stand down next year after serving the maximum two terms after coming to power in 2009.

"I think Jacob Zuma is almost daring the ANC to remove him through a motion of no confidence because he knows that would be damaging for unity in the party," analyst Abdul Waheed Patel told AFP.

In 2008, Zuma's supporters pushed out then-president Thabo Mbekivia a "recall" over allegations of abuse of power.

In local polls in 2016, the ANC recorded its worst electoral result since coming to power with Mandela at the helm in 1994 when white-minority rule fell.

The party faces a tricky general election next year.

Ramaphosa is a former trade unionist and Mandela ally who led talks to end apartheid in the early 1990s and then became a multi-millionaire businessman before returning to politics.

Zuma's hold over the ANC was shaken in December when his chosen successor -- his former wife Nkosazana Dlamini-Zuma -- narrowly lost to Ramaphosa in a vote to be the new party leader.

The ANC has insisted there will be no delay to the budget speech, which is due on February 21.