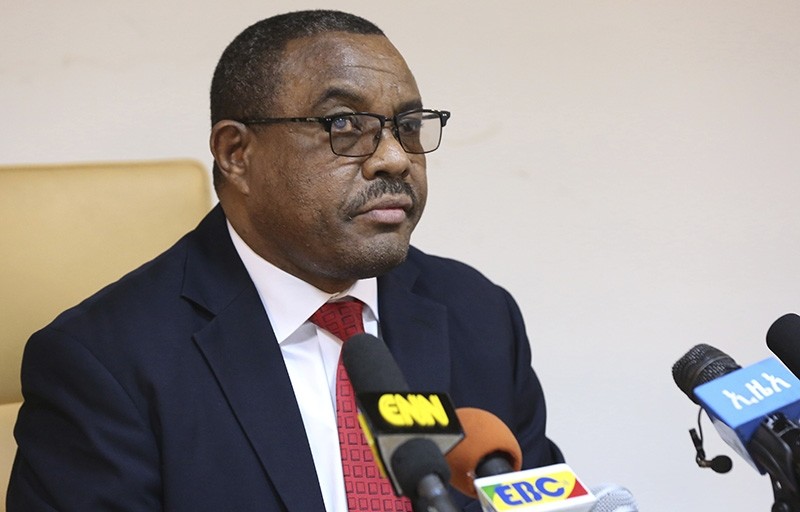 Ethiopia's prime minister announced Thursday he has submitted a resignation letter after the worst anti-government protests in a quarter-century, saying he hoped the surprise decision would help planned reforms succeed and create a "lasting peace."

"I want to be part of the solution," Hailemariam Desalegn said in remarks carried by the Ethiopian Broadcasting Corporation. "I believe that the public's demands and questions should be met and answered." It was not immediately clear whether lawmakers had accepted the resignation.

Ethiopia, one of Africa's fastest-growing economies and a close security ally of the United States, has been rocked by months of protests demanding wider freedoms that have left hundreds dead and tens of thousands detained. The government in recent weeks released more than 6,500 detained opposition figures, journalists and others after the prime minister in an unexpected announcement in January said he wanted to "widen the democratic space for all."

The 53-year-old prime minister said he will continue in his role until the "power transition is completed." He also seeks to unseat himself from the ruling Ethiopian People's Revolutionary Democratic Front.

Ethiopia's demonstrations demanding wider freedoms began in late 2015 and engulfed much of the restive Oromia and Amhara regions before spreading into other parts of the country, leading to a months-long state of emergency that has since been lifted.

"Political infighting between members of the ruling party has caused a serious fracture to the political establishment here," Yilikal Getnet, an opposition politician, told The Associated Press, saying the fact that the prime minister hails from a minority ethnic group might have played a role in his resignation.

"There is no unity within the government. Plus the mass movement of people has rendered the party powerless and was pitting one official against the other," Yilikal said.

Ethiopia's government has long been accused of arresting critical journalists and opposition leaders. Rights organizations and opposition groups have called for their release, saying they were arrested on trumped-up charges and punished for their points of view.

A favorite to replace the prime minister is the head of Ethiopia's Oromia region, Lemma Megerssa. Many see Lemma, the president of the largest federal state, as politically assertive and having the acceptance of many in the younger generation.

But a legal scholar at Mekelle Universtiy, Meressa Tsehaye, said the deputy prime minister is widely expected to succeed Hailemariam. Another option is that the four core parties of the ruling coalition will elect a new party leader who then will lead the country.

"If both these don't happen, then a caretaker or transitional government will be set up. I don't see that a snap election will be needed here," he said.

Hailemariam, an academician-turned-politician, has led Ethiopia since 2012 after the death of former strongman Meles Zenawi. He also served as deputy prime minister and foreign minister under the former leader before assuming power. He also was elected chairman of the African Union in 2013.