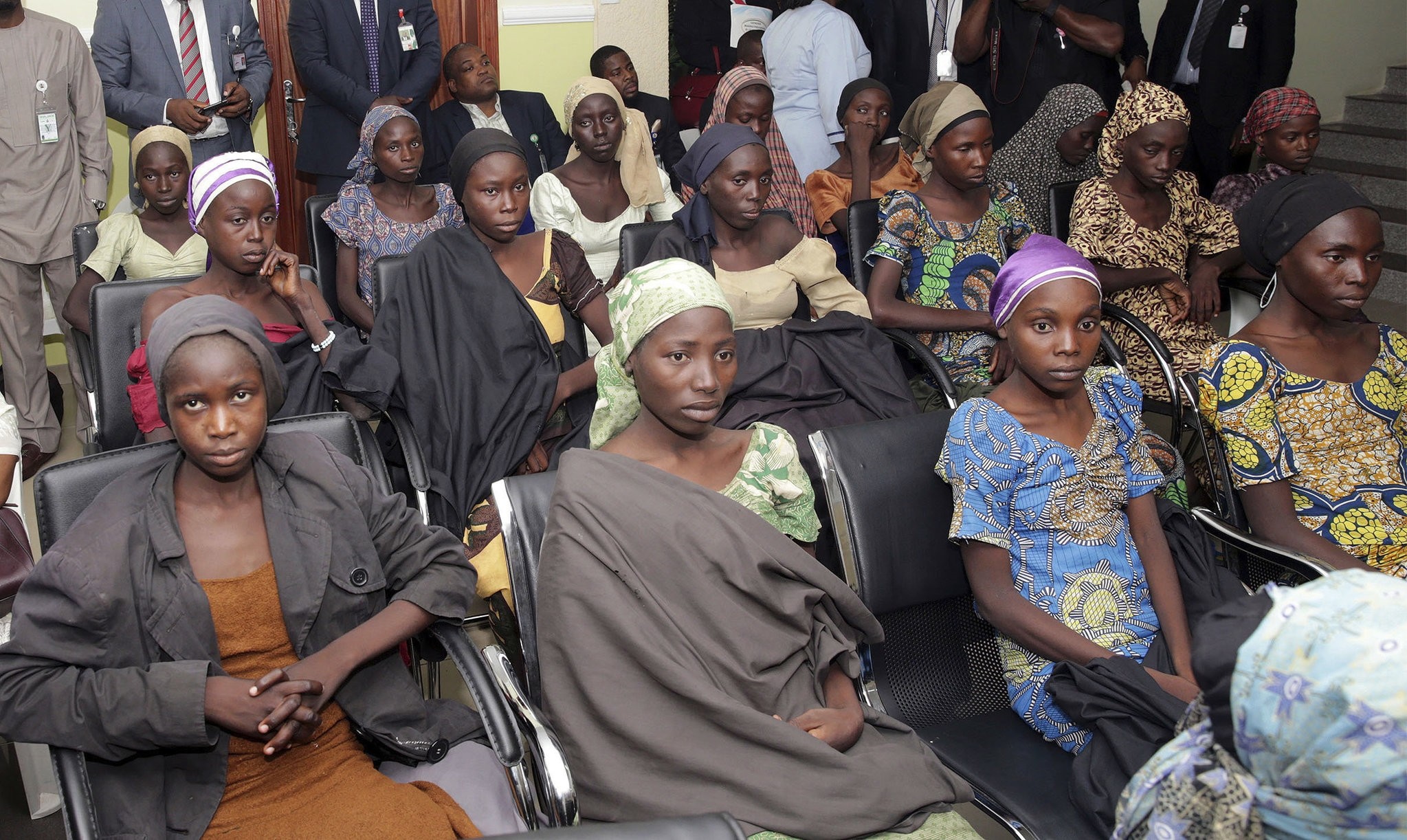 In this Thursday, Oct. 13, 2016 file photo released by the Nigeria State House, Chibok schoolgirls recently freed from extremist captivity are seen during a meeting with Nigeria's Vice President Yemi Osinbajo in Abuja. (AP Photo)
by reuters Feb 21, 2018 12:00 am

Their disappearance, if confirmed, would be one of the largest since Boko Haram abducted more than 270 schoolgirls from the town of Chibok in 2014. That case drew global attention to the nine-year insurgency, which has sparked what the United Nations has called one of the world's worst humanitarian crises.

President Muhammadu Buhari dispatched his foreign and defense ministers on Wednesday to Yobe to investigate the situation, said Information Minister Lai Mohammed, who was also headed there. But he declined to confirm whether any of the students was missing.

A roll-call at the girls' school on Tuesday showed that 91 students were absent, said the two people with direct knowledge of the matter.

"I saw girls crying and wailing in three Tata vehicles and they were crying for help," said a witness from the nearby village of Gumsa who was reportedly forced to show the insurgents the way out of the area and then released.

Reuters was unable to verify the witness's account. Nigerian police and the regional education ministry denied any abductions had taken place, but parents and other witnesses also told Reuters some girls were missing.

The two sources, several parents and other local witnesses who spoke to Reuters did so on condition of anonymity because they had been warned by Nigerian security and government officials not to disclose the disappearance.

Seven parents told Reuters their daughters were among the missing.

"I hope my daughter is not one of those abducted as we learned that over ninety of them were not seen after going through their register book," one parent said.

The Boko Haram militants arrived in Dapchi on Monday evening in trucks, some mounted with heavy guns and painted in military camouflage, witnesses told Reuters.

They went directly to the school, shooting sporadically, sending students and teachers fleeing, the witnesses said, adding that some people had returned to Dapchi after spending the night hiding in the bush.

"They fired shots and left the town toward Gaidam... in the night, where they abducted three people," he said.

The state ministry of education also said there had been no established case of abduction, but shut the Dapchi school for a week to allow students to be reunited with their families.

Late on Wednesday, Nigerian media outlets gave conflicting accounts of how many girls were missing and how many, if any, had been found.

More than 20,000 people have been killed and two million forced to flee their homes in the northeast of Africa's most populous nation since Boko Haram began its insurgency in 2009.

Of around 270 girls originally abducted from their school in Chibok in April 2014, about 60 escaped soon afterwards and others have since been released after mediation. Around 100 are still believed to be in captivity.

Last month, the group released a video purporting to show some of the Chibok girls still in its custody, saying they do not wish to return home.

Aid groups say Boko Haram has kidnaped thousands more adults and children, many of whose cases are neglected.