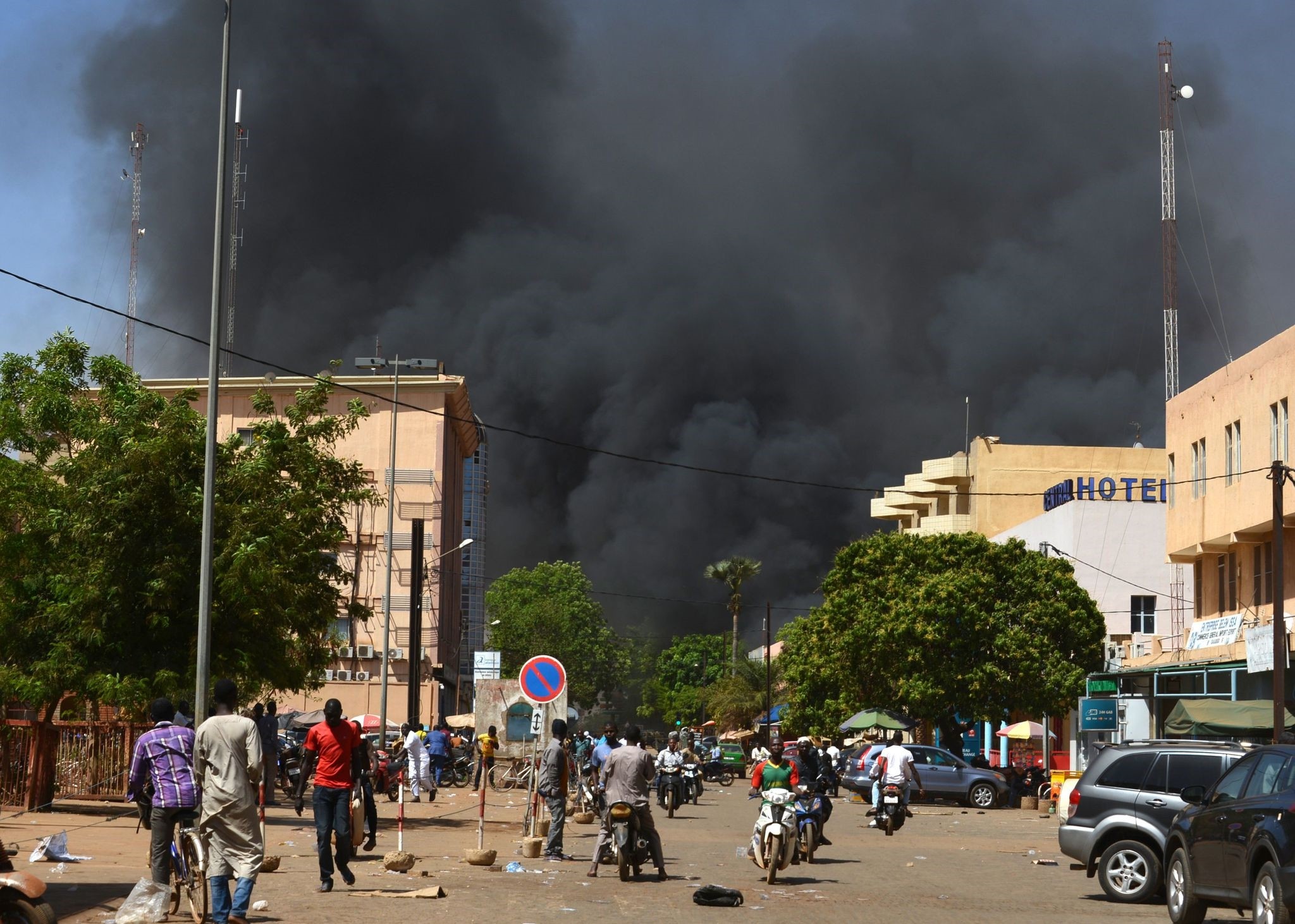 People watch as black smoke rises as the capital of Burkina Faso came under multiple attacks on March 2, 2018, targeting the French embassy, the French cultural centre and the country's military headquarters. (AFP Photo)
by Compiled from Wire Services Mar 02, 2018 12:00 am

At least 28 people, six of them extremists and seven Burkinabe soldiers, were killed after militants opened fire on the French Embassy and army headquarters in separate attacks in capital Ouagadougou Friday, security sources said.

Three security sources, two in France and one in West Africa, told the French Press Agency on Friday at least 28 people had been killed.

Two of the sources said 28 people were killed and a third spoke of "around 30" dead in the attack in the capital Ouagadougou. In a simultaneous attack, the French embassy was also targeted, leaving six assailants killed, according to the Burkinabe government.

It was not immediately clear how many militants were involved in the attacks, which left several people wounded, said Souro Sanou, an official at a hospital in Ouagadougou. He had no other details on the casualties.

Jean Bosco Kienou, director general of Burkina Faso's police, and French Prime Minister Edouard Philippe both called it a terrorist attack. There was no claim of responsibility.

Gunfire and explosions resounded for hours but subsided by midday. Workers fled offices near the site of the violence, and helicopters were seen above the embassy.

Defense and security forces responded to the attacks, police said, and barricades were set up.

Witnesses at the state television offices that face the embassy told The Associated Press that five attackers arrived in a pickup truck and started shooting. They then set fire to the truck and began shooting, the witnesses added.

The neighborhood also houses other embassies, the prime minister's office and U.N. offices.

The assailants there also arrived in a pickup and starting shooting at soldiers, said Moussa Korbeogo, a trader at a nearby market.

"Some of the soldiers ran into a nearby bank to seek shelter. Several were killed outside and inside the premises," Korbeogo said.

There was no official confirmation of casualties among the security forces.

At least four of the attackers at the French Embassy were killed, said Communications Minister Remy Danjuinou, although he added that the total number of extremists involved at both locations was not known and others may be on the run.

French Foreign Minister Jean-Yves Le Drian said in a statement that Burkina Faso's security forces were mobilized with the support of the French to "reduce the threat."

A crisis center was set up at the ministry in Paris to monitor the situation, he said, adding that the safety of French citizens in Ouagadougou "is my priority."

The ministry's website recommended people stay off the streets and remain in a safe place.

Burkina Faso, a landlocked nation in West Africa, is one of the poorest countries in the world. It shares a northern border with Mali, which has long battled extremists.

Ouagadougou has been attacked by extremists targeting foreigners at least twice in the past few years.

In August, extremists opened fire as patrons dined at a restaurant, killing at least 18 people. In January 2016, extremists attacked another cafe popular with foreigners, killing 30 people.

Al-Qaida claimed responsibility for the 2016 killings along with the terrorist group known as Al Mourabitoun. But the terror threat in Burkina Faso is increasingly homegrown, experts say.

The northern border region near Mali is the home of a local preacher, Ibrahim Malam Dicko, who has claimed responsibility for recent deadly attacks on troops and civilians. His association, Ansarul Islam, is considered a terrorist group by Burkina Faso's government.

Among his objectives has been ending the use of French, the former colonizer's language, in regional schools. Forces backed by the French military have failed to capture Dicko.

Longtime President Blaise Compaore was ousted in a popular uprising in late 2014, and a coup was mounted the following year but ultimately failed. Some critics say the military has suffered during the years of political upheaval.

During the 2016 assault, security forces waited for hours before trying to intervene.

Threats by extremists also moved into new parts of Burkina Faso in February with an attack by 10 people in an eastern town that killed an officer and wounded two others.

Increased attacks at the border with Mali have forced thousands to flee in the past year. An Australian doctor who had spent decades treating civilians was also abducted along this border and remains missing.