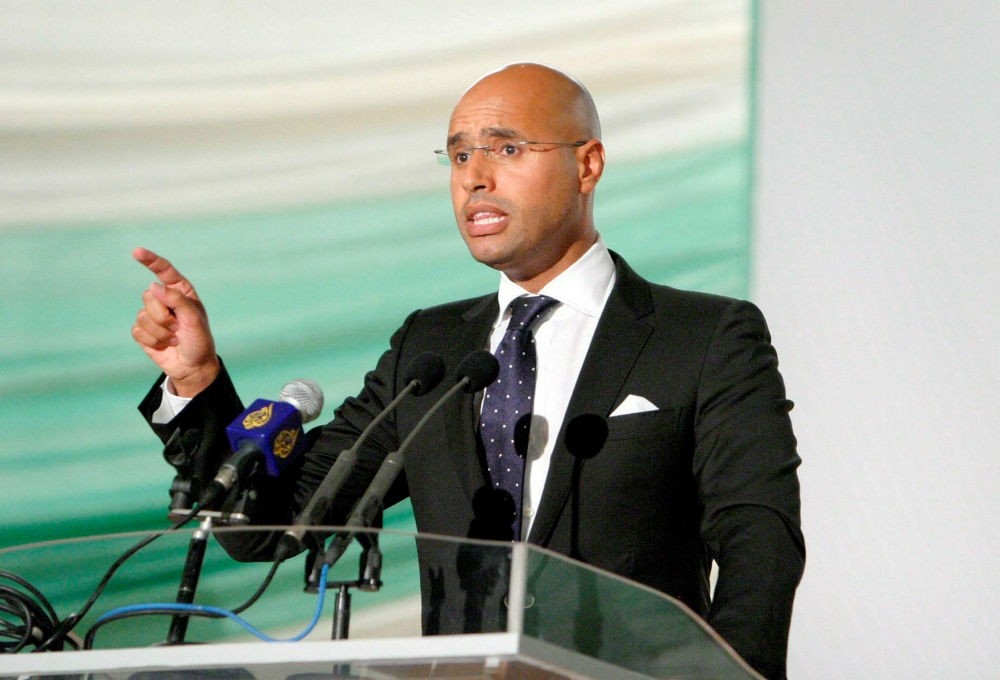 Saif al-Islam Gadhafi, son of Libyan then President Moammar Gadhafi speaks during a gathering in Tripoli before the NATO intervention, July 24, 2008.
by Daily Sabah with Wires Mar 21, 2018 12:00 am

Nearly seven years after the NATO-led ouster and subsequent killing of the strongman Moammar Gadhafi, his son, Saif al-Islam, announced his nomination as a candidate for the Libyan presidency in the 2018 elections

Saif al-Islam Gadhafi, the son of former Libyan strongman Moammar Gadhafi, will run for the Libyan presidency in the 2018 elections, his supporters announced on Monday, as reported by the Libyan Express.

The Saif al-Islam supporters in the guise of the Popular Front for the Liberation of Libya (PFLL) launched the election campaign, which is based on national reconciliation as well as aiming to rebuild the war-torn nation under one Libyan government and one president.

"Saif al-Islam Gadhafi has decided to run in the upcoming presidential elections and does not aspire to power in its traditional sense," PFLL spokesman Ayman Abu Ras announced during a press conference in Tunis.

His intention to run for the upcoming presidential election was released late December by Libyan tribal chief and spokesperson of the Gadhafi family, Basem al-Hashimi al-Soul, according to Egypt Today.

Saif, 44, is the most prominent of the late leader's children, and was touted by some as a reformist successor before the Nato-led uprising in which the Libyan ruler Gadhafi was toppled and killed.

An arrest warrant was issued by the International Criminal Court (ICC) in 2011, for the crimes against humanity of murder and persecution, allegedly committed in Libya in the same year as the conflict that saw Gadfafi ousted from power. Saif's lawyer Khaled al-Zaidi told Reuters in an interview in Cairo last year that Saif would make a statement at some point and would not be turning himself in to the ICC. He was freed last year by Zintan's Abubaker Sadiq brigade in western Libya where he had been held for a time shortly after the 2011 revolt. The armed group which was responsible for guarding Saif, said it had chosen to release him following requests from the justice ministry of a government based in eastern Libya that is a rival to the U.N.-backed one in the capital, Tripoli. The younger Gadhafi then left Zintan for an undisclosed location. Since then, no physical evidence of his whereabouts has been released. Saif was last seen by an independent international observer in June 2014.

In 2015, a Libyan court in the capital, Tripoli, sentenced Saif al-Islam to death on charges related to killings during the country's 2011 uprising. He had been in custody in Zintan since his capture in late 2011, which came after his father was killed.

Libya slid into turmoil after Gadhafi's overthrow, with rival governments and armed alliances competing for power. A U.N.-backed government in Tripoli has struggled to impose its authority and has been rejected by factions in the east.

Nearly seven years after Moammar Gadhafi was toppled by NATO intervention, the country has become bastion for Daesh, giving militants a new base even as its territory in Syria and Iraq shrinks under constant assault as political instability and chaos has prevailed. Since then, the powerlessness of the central government has led many people to take up arms against the it, with rival governments and armed alliances competing for power. A U.N.-backed government in Tripoli has struggled to impose its authority and has been rejected by factions in the east. State security forces have failed to protect the government, leaving the country unprotected and open to heavy clashes between rival militias trying to gain authority over the government and the country. Peace and political stability seems far off, as no rival militias have been strong enough to put an end to the ongoing war.