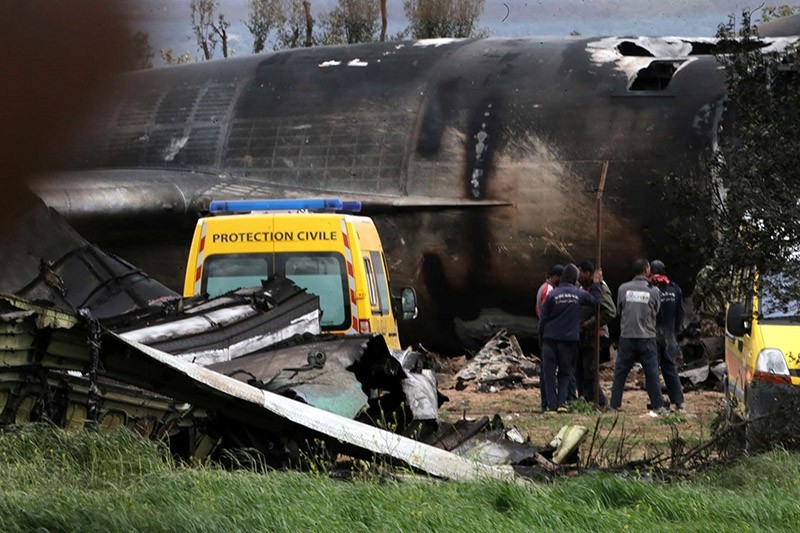 Algerian rescuers stand next to the wreckage of a military transport aircraft that crashed in Boufarik, about 30Kms south the capital Algiers, Algeria, 11 April 2018. (EPA Photo)
by Apr 12, 2018 12:00 am

The first bodies from this week's crash of an Algerian plane, which claimed 257 lives, have been identified, the Defense Ministry said Thursday.

The identified bodies will be handed over to families of the victims for burial, the ministry added in a statement.

On Wednesday, the Russian-made Ilyushin Il-76 plane crashed in a farm field in the vicinity of the Boufarik airbase outside the capital, Algiers. It is believed to be Algeria's worst aviation disaster.

Algerian army chief-of-staff Ahmed Gaid Salah paid last respects to the identified dead at a military hospital and said the identification process must be expedited.

The dead included 10 crew members. Most of those on the flight were military personnel and their family members.

The cause of the crash remains unclear.

Algeria has seen a series of air crashes in recent years.

In 2003, an airliner with national carrier Air Algerie crashed after one of its engines caught fire following take-off from the southern city of Tamanrasset en route to Algiers, killing 97 passengers and six crew members.

In 2014, a military transport plane slammed into a mountain in Algeria's rugged eastern region, killing 77 people on board. Bad weather was blamed for that crash.