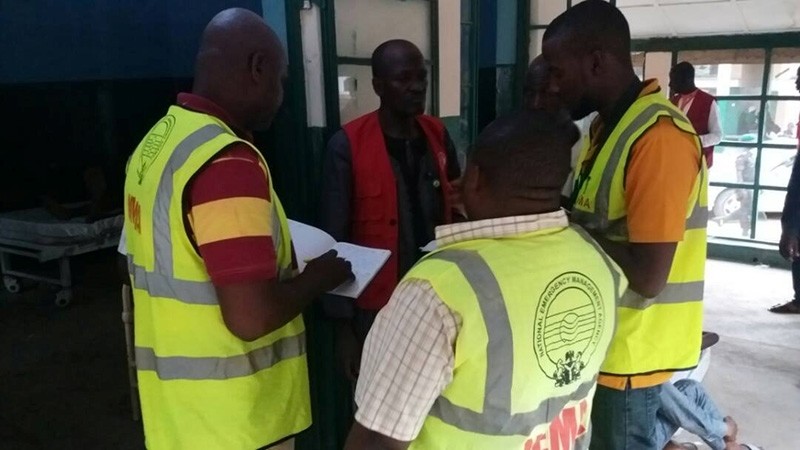 Members of the National Emergency Management Agency (NEMA) prepare to evacuate casualties from the site of blasts attack in Mubi, in northeast Nigeria May 1, 2018. (Reuters Photo)
by Compiled from Wire Services May 02, 2018 12:00 am

Turkey's foreign ministry on Tuesday condemned a terrorist attack in northeast Nigeria that killed at least 27 Muslim worshippers and injured 56 others.

"We are saddened by the terrorist attack perpetrated today at a mosque in the city of Mubi in Nigeria that claimed many lives and left numerous people injured," the ministry said in a statement.

The ministry "strongly" condemned "this second terrorist attack within six months in Mubi," wished a speedy recovery to the wounded and conveyed its condolences to the government and people of Nigeria.

Nobody has claimed responsibility for the blasts, but they came a few days after the Boko Haram terrorist sect attempted to infiltrate the city of Maiduguri, the focal point of a nine-year insurgency that has killed over 20,000 in the country's northeast and displaced millions across the Lake Chad region.

This is the second time in six months that dozens have been killed in an attack on a Mubi mosque. In November, a teenage suicide bomber attacked worshippers as they gathered for morning prayers, killing at least 50 people in one of the region's deadliest assaults in years.

One resident, Isa Danladi, said he had been about to leave his house near the mosque when he heard the blast.

"The mosque roof was blown off and the prayer was midway when the bomber, who was obviously in the congregation, detonated his explosives," Danladi said. "This is obviously the work of Boko Haram."

The National Emergency Management Agency coordinator in Adamawa state, Imam Abbani Garki, said 18 people were critically wounded and had been evacuated for treatment in Yola city.

Boko Haram briefly took over Mubi in late 2014 as its fighters rampaged across northeastern Nigeria, seizing towns and villages in its quest to establish a hard-line area of control.

The military and civilian militia ousted the extremists from the town, which is a commercial hub near the border with Cameroon.

In recent months, Boko Haram activity has been concentrated in the far north of Adamawa state, around Madagali, near the border with Borno state. That area is not far from the Sambisa Forest area where the extremists had a stronghold.

Boko Haram fighters are also said to be hiding in the Mandara mountains to the east near Cameroon.