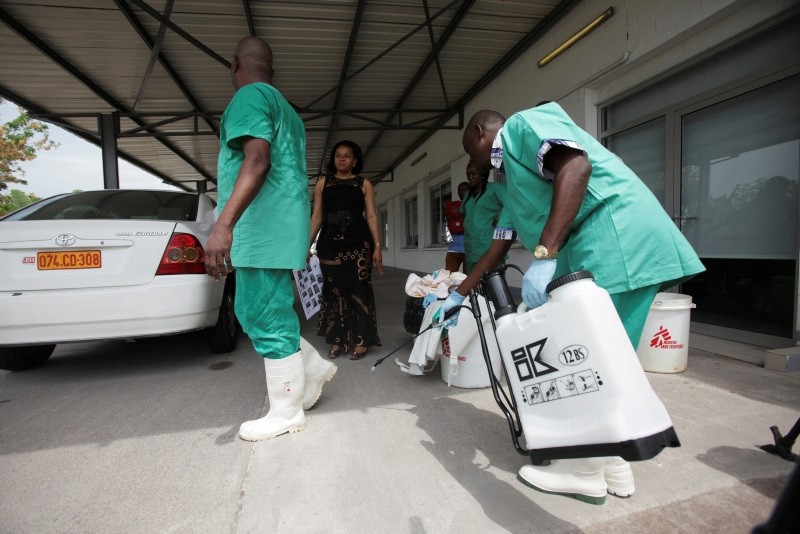 A health worker sprays a colleague with disinfectant during a training session for Congolese health workers to deal with Ebola virus in Kinshasa October 21, 2014. (REUTERS Photo)
by Compiled from Wire Services May 11, 2018 12:00 am

The World Health Organization is preparing for the worst case scenario in an Ebola outbreak in a remote area of Congo, including spread to a major town, WHO Deputy Director-General of Emergency Preparedness and Response Peter Salama said on Friday.

He told a regular U.N. briefing in Geneva that he hoped the Democratic Republic of Congo would give the green light within days for the deployment of an experimental vaccine, but warned that the drug was complicated to use and was not a magic bullet.

"All of the preparations are being put in place. As soon as we have the green light, we'll go for it," he said.

"We are very concerned and planning for all scenarios, including the worst case scenario," Salama said.

The immediate risk was the outbreak spreading to the provincial capital Mbandaka, with about 1 million inhabitants.

"If we see a town of that size infected with Ebola, then we are going to have a major urban outbreak, which is going to be a real challenge," he said.

"Once Ebola gets into urban areas, especially poor urban slums, it's extremely difficult to get rid of the disease."

The WHO has also put Congo's nine neighbors on high alert, with most concern for Congo Republic, which shares a long border with it on the Congo and Ubangi rivers, and Central African Republic to the north, although the risk of international spread was still seen as low.

The Organization and the medical charity Medecins Sans Frontieres already have specialists on the ground and hope to have a mobile laboratory up and running this weekend, he said.

It is hoping the United Nations can set up a helicopter air bridge to bring 20 WHO specialists to the site this weekend and then clear an airstrip for small aircraft so that hundreds of protective suits and other equipment can be flown in.

Congo's minister of health on Thursday announced the first death since a new Ebola outbreak was declared in the country, as well as nine other cases of people sickened by a hemorrhagic fever that is suspected as Ebola.

Health officials declared an Ebola outbreak in the country's northwest on Tuesday after lab tests confirmed the deadly virus in two cases from the town of Bikoro in the Equateur province.

Seven people with a hemorrhagic fever, including two confirmed cases of Ebola, were hospitalized in Bikoro as of Thursday, according to Health Minister Oly Ilunga. The death happened overnight at a hospital in nearby Ikoko Impenge hospital that also reported four new suspected cases of Ebola, Ilunga said.

Ilunga told The Associated Press that the patient who died was a nurse. Three other nurses also were being treated for a hemorrhagic fever, he said.

The minister clarified with The Associated Press that testing still must be done in nine cases, and equipment to conduct rapid testing on the patients has been dispatched.

The two Ebola cases were confirmed as the Zaire strain after officials in the capital, Kinshasa, were alerted early this month to the deaths of 17 people from a hemorrhagic fever and traveled to the Bikoro area to perform tests.

The deaths occurred over a period of time and Ebola, which is not the only virus responsible for hemorrhagic fevers, has not been confirmed as the cause in any of the 17 cases, Ilunga said.

Bikoro Hospital director Dr. Serge Ngalebato told The Associated Press earlier Thursday that nurses at the hospital were among the five suspected Ebola cases there.

"We have isolated the patients," Ngalebato said. "There are no deaths yet, but all of the sick are presenting signs of fever, diarrhea, vomiting, abdominal pain and intense fatigue."

This is the ninth Ebola outbreak in Congo since 1976, when the deadly disease was first identified.

Ebola occasionally jumps to humans from animals, including bats and monkeys.

There is no specific treatment for Ebola, which is spread through the bodily fluids of people exhibiting symptoms. Without preventive measures, the virus can spread quickly between people and is fatal in up to 90 percent of cases.

The director of the National Institute of Biological and Bacterial Research, Dr. Jean Jacques Muyembe, said Wednesday that health experts should be able to quickly contain this outbreak because the area is so remote.

The cases could be linked to a policeman in the Bikoro health zone who presented symptoms of hemorrhagic fever and died in December, Muyembe said. His mother and 10 others then showed similar symptoms.

None of the Ebola outbreaks in Congo have been connected to the massive outbreak in Guinea, Liberia and Sierra Leone in West Africa that began in 2014 and left more than 11,300 dead.