Ebola outbreak in Congo kills 19, 39 infected in total, WHO says 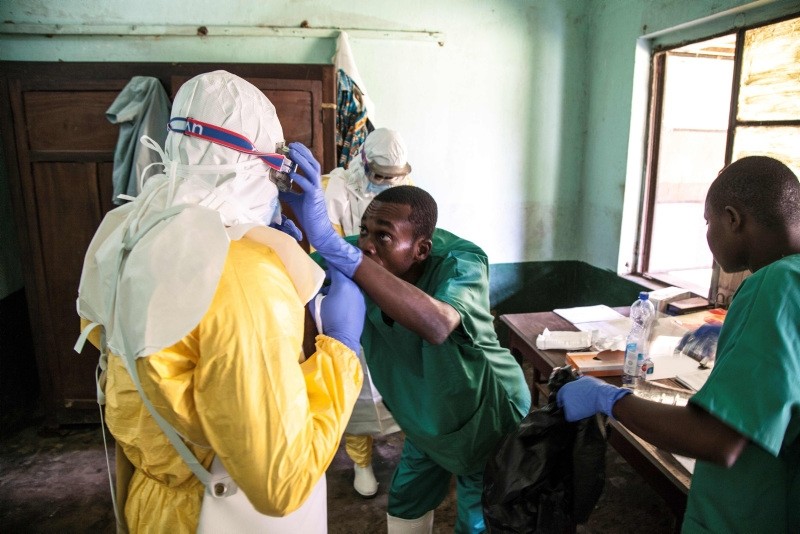 In this handout photograph released by UNICEF on May 13, 2018, health workers wear protective equipment as they prepare to attend to suspected Ebola patients at Bikoro Hospital. (AFP Photo)
by May 14, 2018 12:00 am

Democratic Republic of Congo reported 39 suspected, probable or confirmed cases of Ebola between April 4 and May 13, including 19 deaths, the World Health Organization said on Monday.

It said 393 people who identified as contacts of Ebola patients were being followed up. Information about the outbreak in Bikoro, Iboko and Wangata health zones in Equateur province was still limited, the WHO said in a statement.

At present the outbreak did not meet the criteria for declaring a "public health event of international concern," which would trigger the formation of an emergency WHO committee.

The Democratic Republic of Congo and U.N. agencies began deploying emergency teams of specialists over the weekend to try to prevent the spread of an Ebola epidemic.

The World Health Organization obtained 4,000 doses of an experimental Ebola vaccine and was preparing for deployment in Congo, its Africa director, Matshidiso Moeti, told Reuters by telephone on Sunday.

Only two cases have so far been confirmed in a laboratory.

The latest suspected case was reported on Friday in the northwestern province of Equateur, which Health Minister Oly Ilunga Kalenga visited on Saturday with officials from the WHO and U.N. Children's Fund (UNICEF).

Moeti said 362 contacts had been traced of those who had fallen sick - a necessary precursor to deploying the vaccines. She added that two of those contacts had got to the provincial capital, Mbandaka. The biggest worry since the epidemic was identified has been that it could spread there.

"We're concerned because this is a city of 1 million people," she said.

Congo first reported the outbreak, centered on the village of Ikoko Impenge, near the town of Bikoro, on Tuesday, with 32 suspected, probable or confirmed cases of the disease, including 18 deaths since April 4. Some deaths occurring as early as January have not yet been linked to the epidemic.

"It is evident that two or three months earlier, some cases of hemorrhagic fever and some deaths occurred," Moeti said. "Work is under way to determine the beginning of this epidemic."

Officials are racing to prevent the virus from spreading out of control, as happened in West Africa from 2014 to 2016, when Ebola killed more than 11,300 people in Guinea, Sierra Leone and Liberia.

The WHO was criticized for bungling its response to that epidemic, and so has moved quickly.

Congo suffered eight previous Ebola epidemics. But owing to remote geography and poor transport links, they tended to fizzle out rather than spread to become a national crisis.

But this epidemic's proximity to the Congo River, a major transport route and lifeline both to Congo's capital, Kinshasa, and to neighboring Congo Republic's capital, Brazzaville, makes it more likely the virus could break out into a wider area.

The disease - most feared for the internal and external bleeding it can cause in its victims owing to damage done to blood vessels - has already spread to three locations covering 60 km (37 miles) or more in Equateur province.

Congo's nine neighbors have been put on high alert in case Ebola crosses a border, especially to Republic of Congo or Central African Republic.

"The WHO is strengthening its presence, positioning a dozen epidemiologists who will be divided on the axes of Mbandaka, Bikoro and Iboko to investigate alerts," its Congo representative, Allarangar Yokouide, said.

The WHO said on Friday it hoped to deploy an experimental Ebola vaccine to tackle an outbreak.