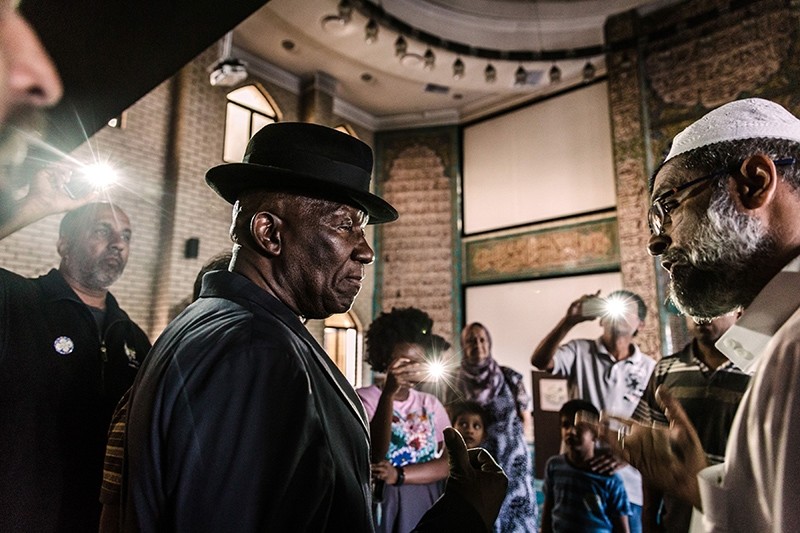 S. African Police Minister Bheki Cele (L) along with senior police and crime intelligence investigators speaks with Moulana Safiuallah Khan, a cleric from Johannesburg, as he visits the Imam Hussain Mosque in Verulam on May 13, 2018. (AFP Photo)
by Compiled from Wire Services May 14, 2018 12:00 am

South Africa's Directorate for Priority Crime Investigation, also known as "Hawks," has confirmed that a device found at a mosque in the KwaZulu-Natal province on Sunday night is a bomb.

KwaZulu-Natal Hawks spokesman Simple Mhlongo told local TV eNCA that they conducted a brief meeting with the explosive unit members, who confirmed to them that the mechanism of the device was an explosive "but they haven't analyzed what chemicals it's made of," he said.

A private security official Prem Balram said worshippers had told him that "a device that resembled a bomb" which was attached to a phone and was connected into a "white capsule via two cables was found under the chair at the prayer place, it was actually the moulana's chair," referring to the Muslim religious leader.

Speaking to the local eNCA television news network, Balram said the entire mosque and up to 40 homes in the vicinity were also evacuated for the safety of residents.

The mosque where the device was found had been attacked last Thursday by unknown assailants, who stabbed three people, killing one and critically injuring the other two.

Police said the motive for the attack was unknown, but community activists said it might be sectarian violence as the mosque belongs to the Shia community.

Iqbal Jassat of Media Review Network, the Muslim advocacy group, said they were "shocked and outraged by the violent attack which displayed utter disregard for the sanctity of life and the sacredness of the mosque."

South African Muslims, who comprise some two percent of the total population, which is 55 million, are known to be tolerant and these attacks are new in the community.

Some mosques have now beefed up security by hiring guards to protect worshipers ahead of Ramadan, the holy month of fasting.