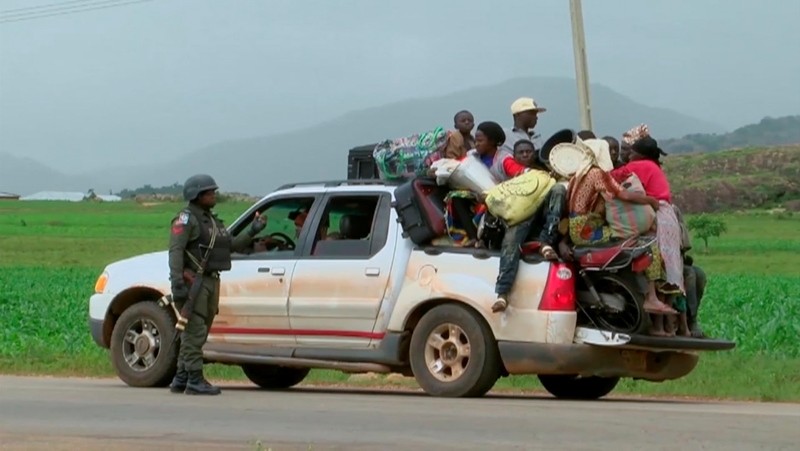 Security personal at a check point observe a pickup truck loaded with people and their belongings as they drive off to safety as police attempt to restore calm, in the town of Jos, Nigeria, Sunday June 25, 2018. (Nigeria Government via AP)
by Compiled from Wire Services Jun 25, 2018 12:00 am

Scores are dead after vicious weekend clashes in central Nigeria between mostly Muslim herders and Christian farmers, with one report citing police saying 86 people were killed. The growing conflict by some accounts has become deadlier than Nigeria's Boko Haram extremist insurgency.

Nigeria's president in a statement Monday accused unnamed politicians of taking advantage of the chaos ahead of next year's elections, calling it "incredibly unfortunate."

Dramatic footage from Jos showed angry people waving machetes and sticks and shouting at passing security forces as they weaved around overturned and burning vehicles. Smoke rose in the distance. Women and children clutching overstuffed bags piled into the back of trucks, seeking a way out.

President Muhammadu Buhari warned against reprisal attacks after the "deeply unfortunate killings across a number of communities" in central Plateau State as the military, police and counterterror units were sent to end the bloodshed. "No efforts will be spared" to find the attackers, Buhari said.

Nigeria's government said "scores" were killed but did not announce a death toll. The independent Channels Television cited a Plateau State police spokesman, Mathias Tyopev, as saying 86 people had been killed, with at least 50 houses destroyed.

Mass burials began Monday amid fears that the death toll was even higher.

"Please remain calm," said the Plateau State governor, Simon Bako Lalong, as a helicopter whirred overhead. "It is very, very, unfortunate that an incident is happening again like this."

One motorist who escaped the violence said he saw six dead bodies and the youths were targeting anyone who looked "Fulani and Muslim", referring to the ethnic group of the herders.

The authorities in Nigeria have previously downplayed death tolls and local media on Monday quoted several local Berom groups as saying that more than 100 people were killed.

One Christian charity based in the Plateau state capital Jos, the Stefanus Foundation, put the death toll from attacks on six villages at 169.

There was no independent verification of the figures.

The deadly clashes between herders and farmers in central Nigeria are a growing security concern in Africa's most populous country, which is roughly split between Muslims in the north and Christians in the south.

The threat from Boko Haram, which continues to carry out attacks in the northeast, has been cited as one cause of the growing tensions as herders — also feeling the effects of climate change — are forced south into more populated farming communities in search of safe grazing.

The widespread security issues pose a major challenge to Buhari, a Muslim former military ruler who won office in a democratic transfer of power in 2015, as elections approach next year.

The latest clashes began when about 100 cattle were rustled and some herders were killed, the statement from Buhari's office said. "Less than 24 hours later, violence broke out. Some thugs then took advantage of the situation, turning it into an opportunity to extort the public, and to attack people from rival political parties."

Some people were dragged from their cars and attacked if they said they supported certain politicians, the statement said.

The Plateau State governor announced a 6 p.m. to 6 a.m. curfew in the communities of Jos South, Riyom and Barkin Ladi until further notice.

Ndi Kato, a campaigner for indigenous people in the central states, told AFP people were angry and security needed to be improved.

"We are losing people at war levels now," she said, calling for civilian militia to be set up in the restive region.

The long-running conflict has its roots in a battle for land and water but over the years has taken on an ethnic, political and religious dimension, making it a huge security concern.

Chris Ngwodo, a political commentator, said the cyclical pattern of tit-for-tat violence needed to be broken.

"There has to be a real serious commitment to arresting the perpetrators and very decisively and publicly putting them through the entire judicial system," he said.

"There's no commitment currently that's going to happen. That's why there's vigilantism and communities taking matters into their own hands."