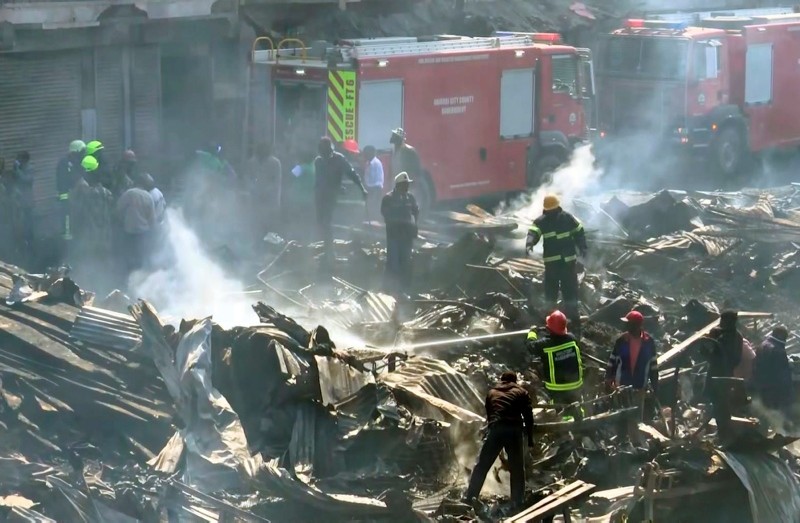 In this image from TV, a fire fighter damps down the charred debris after a fire swept through a marketplace in Nairobi, Kenya, Thursday June 28, 2018. (AP Photo)
by Compiled from Wire Services Jun 28, 2018 12:00 am

"The fire started from inside a timber shop," said Nairobi Regional Commissioner William Kang'ethe Thuku, adding that it spread to nearby shanty houses and a second-hand clothing section of the market.

"A team of police and firefighters arrived at the scene in a bid to stop the fire. Fifteen people have been confirmed dead and more than 70 others have been admitted with light fire injuries to serious burns."

Thuku said that the cause of the blaze has yet to be determined but that in previous years, power lines in the area had started fires.

Millicent Omanga, a local shop owner, was crying in the aftermath of the fire, which claimed her business.

"I've lost everything, I don't know where I'll start, my shop was torched to the ground," she said.

Search and rescue operations for missing persons are still ongoing.

Thuku said that cooking gas cylinders, which are still exploding, were further complicating the rescue process and that the number of injured people could be higher.

Nine of the dead were in an apartment block next to the market while six others died of their injuries in hospital.

Thurday's fire is the seventh at Gikomba Market in less than 10 years. A large fire destroyed much of the market in October last year.

In May 2014, 10 people died in a bombing at the market blamed on Al-Qaeda-aligned Shabaab militants.