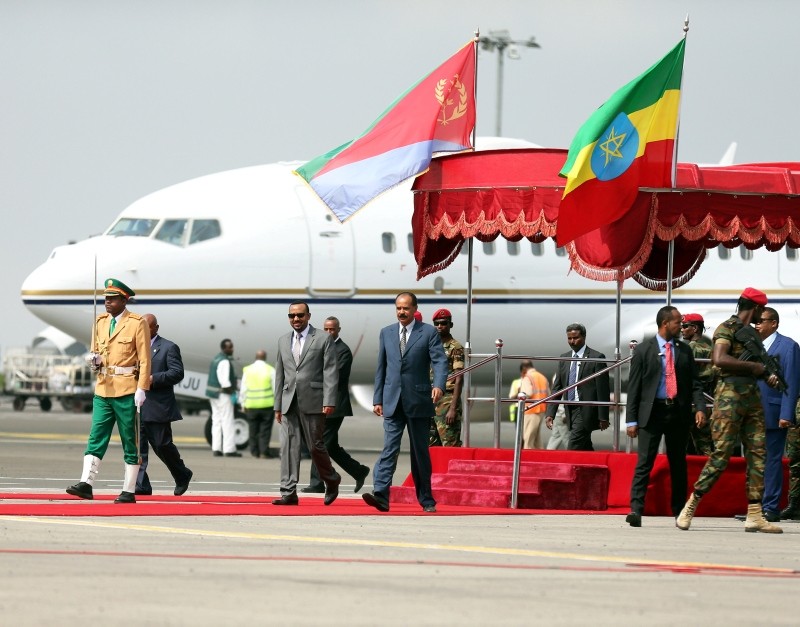 To dancing and cheers, Eritrea's longtime president arrived in Ethiopia for his first visit in 22 years on Saturday amid a dramatic diplomatic thaw between the once-bitter rivals.

The 42-year-old Abiy broke the ice last month by fully embracing a peace deal that ended a 1998-2000 border war that killed tens of thousands and left families separated. A series of diplomatic breakthroughs quickly followed as one of Africa's longest-running conflicts neared an end.

Some excited Ethiopians have compared the restoration of relations with one of the world's most closed-off countries to the fall of the Berlin Wall. Telephone links have opened, with some Ethiopians calling complete strangers in Eritrea just to say hello, and the first scheduled Ethiopian Airlines flights to Eritrea begin Wednesday.

A visibly moved Abiy on Saturday praised residents of the capital for their warm welcome of the Eritrean president, with their chants of "Isaias! Isaias!" and flag-waving.

"I'm very emotional right now. I have no words to express how proud I am," Abiy told a luncheon at the National Palace.

"Thank you for the genuine love that you all showed us," Isaias said in return. "This is a historic day for all of us. Anyone who thinks the people of Eritrea and Ethiopia are separated is considered as naïve from now on."

The international community has embraced the reunion as a welcome development in a critical and often unstable region along one of the world's busiest shipping lanes and across from the Arabian Peninsula.

The old Eritrean embassy in Addis Ababa has undergone a rapid renovation and is expected to open during Isaias' visit. The two leaders also are expected to attend a concert of about 25,000 people on Sunday featuring local artists,

Some Ethiopians lining the streets for a glimpse of Isaias' motorcade chanted songs that criticized the Tigray Peoples Liberation Front, which for years was the ruling coalition's strongest political party and hostile to Eritrea until the new prime minister came to power in April and began a breathtaking wave of reforms in Africa's second most populous nation.

The gesture of peace with Eritrea has been the most surprising. The country of 5 million people perched on the Red Sea has been ruled by Isaias since gaining independence from Ethiopia in 1993 after years of rebel warfare. While the two countries share close cultural ties, the border war and Ethiopia's later refusal to hand over disputed border areas was used by the 72-year-old Isaias to keep Eritrea in a state of military readiness, with a system of compulsory conscription that led thousands of Eritreans to flee toward Europe, Israel and elsewhere.

Observers now wonder whether the end of fighting with Ethiopia will lead Eritrea, long criticized by human rights groups, to open up and embrace new freedoms.

Business is another focus, as landlocked Ethiopia seeks outlets for its fast-growing economy and already has signed agreements to use Eritrea's port facilities.