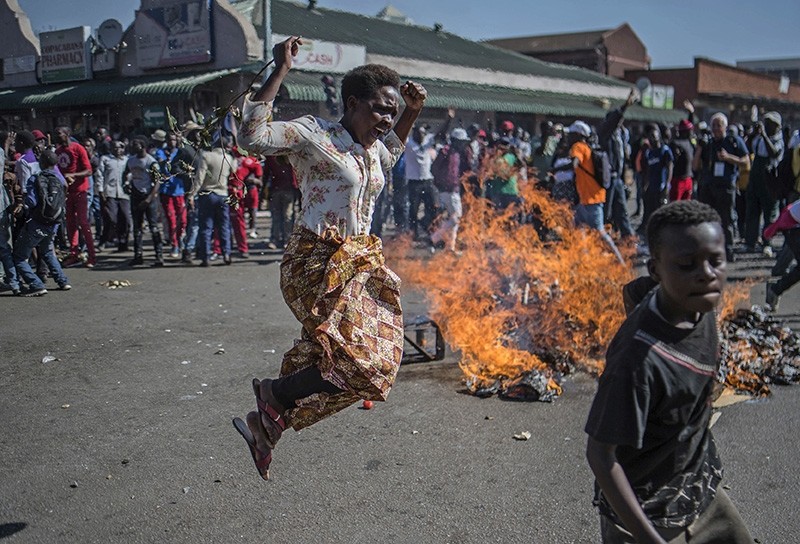 Opposition MDC party supporters protest in the streets of Harare during clashes with police Wednesday, Aug. 1, 2018. (AP Photo)
by Compiled from Wire Services Aug 01, 2018 12:00 am

Soldiers and police fired live rounds, water cannons and tear gas at furious protesters who threw rocks and burned vehicles Wednesday in Zimbabwe's capital, dashing the optimism of an election that the country hoped would set it on a new course after decades of Robert Mugabe's rule. At least three people were reported killed.

Violence swept through central Harare after an official announcement that the ruling ZANU-PF party had won most of the seats in Parliament, an outcome that enraged opposition supporters who believe they have been cheated of victory.

The Zimbabwe Electoral Commission's decision to delay announcing the results of the presidential race at least until Thursday — three days after the vote — seemed certain to bring more opposition anger if President Emmerson Mnangagwa is declared the winner. Alternatively, many Zimbabweans wonder whether the ruling establishment, including the military, would accept a win for the main opposition leader, Nelson Chamisa.

The Zimbabwe Electoral Commission results showed Mnangagwa's ZANU-PF cruising to a big majority after picking up 109 seats against 41 for the opposition Movement for Democratic Change (MDC). Another 58 seats are yet to be declared.

The House of Assembly of Parliament has 210 seats and ZANU-PF would need to win 30 more to have a two-thirds majority that would allow it to change the constitution at will.

Voters in Zimbabwe pick a presidential candidate based on their party affiliation and the trend in the parliamentary election was expected to continue when results for the president are announced this week.

The opposition MDC, led by Nelson Chamisa, won in most urban centers, where it enjoys majority support.

Monday's upbeat spectacle of millions of Zimbabweans voting peacefully was eclipsed 48 hours later by scenes of tanks and other military vehicles speeding through debris-strewn streets and soldiers beating protesters who had blocked main roads and set bonfires. Some journalists also were attacked.

Gunfire was heard downtown throughout the afternoon, including near the ruling party headquarters where protesters had gathered. Police fired tear gas and grabbed more canisters from an officer carrying them in a crate.

Three people were killed, state broadcaster ZBC said. Associated Press journalists saw two bodies and another person who had been shot in the leg. There were pools and trails of blood on the streets.

The riots surged up to the fence of the Rainbow Towers Hotel & and Conference Centre, where the electoral commission has been announcing results and many international election observers are staying. Inside the main gate, a water cannon mounted on a police vehicle blasted protesters who hurled rocks that bounced off its armored plating.

"They are trying to protest so they can get fair results," said Elisha Pfigu, a 31-year-old street vendor who warily watched soldiers at an intersection.

Pfigu said he was optimistic on election day for the country's first vote without Mugabe, who ruled for nearly four decades, on the ballot.

"Now it's different. It's totally different" he said. "People were happy on Monday. Now they are not happy. We are not going to rest."

Authorities invoked Zimbabwe's Public Order and Security Act, which allows police to ban public meetings or gatherings. The police can also ask the military for help in cases of public disturbances. Under Mugabe, the law was used routinely to ban anti-government meetings and demonstrations since its enactment in 2002.

Mnangagwa, a former deputy president who succeeded Mugabe after a military takeover in November, blamed the opposition for the violence and said it was "meant to disrupt the electoral process," the state broadcaster reported.

The opposition, in turn, said security forces acted in a "disproportionate and unjustified" way, and it questioned why the military had been deployed.

"Are we in war? Are civilians the enemy of the state?" said Nkululeko Sibanda, spokesman for the Movement for Democratic Change, the main opposition party.

United Nations deputy spokesman Farhan Haq appealed to Zimbabwe "to exercise restraint and reject any form of violence while awaiting resolution of the disputes and announcement of the election results."

International monitors gave their first assessments of the election, saying it was conducted in a relatively free environment and was a big improvement over past votes marred by violence and irregularities, although they noted significant problems.

European Union observers said "a truly level playing field was not achieved" in the election, pointing out the "misuse of state resources, instances of coercion and intimidation, partisan behavior by traditional leaders and overt bias in state media."

Elmar Brok, head of the EU observer mission, said there were "many shortcomings" in the election, but it was unclear whether they influenced the results.

The opposition alleged irregularities, saying results were not posted outside one-fifth of polling stations as required by law. MDC leader Chamisa has said outright that his own count shows he won the election, drawing government accusations of inciting violence.

After first indicating it would release presidential vote totals on Wednesday, the electoral commission said it would wait until Thursday, adding that agents for the more than 20 candidates must verify them first.

"The more the presidential vote is delayed, the more it calls into question the population's confidence in the election process," said former Liberian leader Ellen Johnson Sirleaf, the lead observer of a U.S. monitoring mission.

While the electoral commission legally has five days from the end of the election to announce results, Western observer groups urged the release of the presidential results as soon as possible. The EU mission questioned why presidential votes were counted first but were being announced last.

Many Zimbabweans looked to the vote as a launching pad for a return to the kind of international acceptance and relative prosperity that the country enjoyed in the first part of the rule of Mugabe, who took office after independence from white minority rule in 1980.

But the violence in Harare seemed to put those aspirations on hold. It was the first time the military was back in the streets since Mugabe's ouster — at that time, they were welcomed by residents as liberators. On Wednesday, they came to enforce a crackdown.

At Harare's Parirenyatwa Hospital, a family wept in an emergency room where a man who had been fatally shot lay on a stretcher. At one point, the relatives blocked hospital staff from wheeling the body to the mortuary and demanded a police explanation; a plainclothes officer said they could return Thursday to pick up the body after a police investigation.

Jack Mufambi, a resident walking near the ruling party headquarters, said he was scared to go outdoors on Thursday. He said he had seen the body of someone cut down by gunfire.

"His eyes were open," Mufambi said. "He was dead."