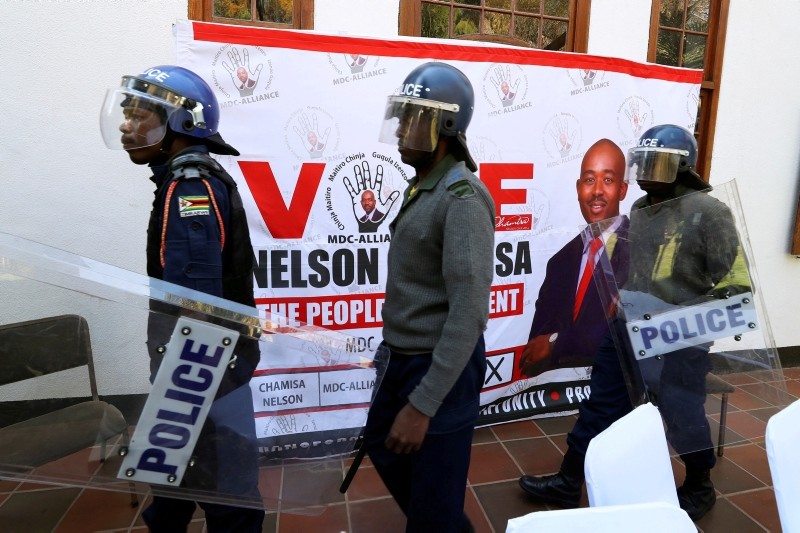 Riot police arrive at a press conference due to be addressed by opposition Movement for Democratic Change (MDC) leader Nelson Chamisa, ordering journalist out of the venue in Harare, Zimbabwe, August 3, 2018. (Reuters Photo)
by Compiled from Wire Services Aug 03, 2018 12:00 am

Zimbabwe's opposition leader insisted Friday that he won the country's landmark election, rejecting the results as "fraudulent" and vowing to challenge them in court.

"We won this election and we are ready to form the next government," said Nelson Chamisa, after official results showed him losing to President Emmerson Mnangagwa, a former ally of ousted autocrat Robert Mugabe.

The 40-year-old Chamisa spoke shortly after three truckloads of riot police with shields and batons tried to disperse dozens of journalists gathered to hear him. With cameras recording their every move the police eventually pulled back, allowing him to give a blistering denunciation of the results.

"We won this election," Chamisa said, declaring "a day of mourning ... for democracy."

The Zimbabwe Electoral Commission (ZEC) declared 75-year-old Emmerson Mnangagwa victorious in the early hours of Friday with 50.8 percent of the vote -- just enough to avoid a run-off against Chamisa, who scored 44.3 percent.

Chamisa charged that there had been flagrant rigging under ZEC, a body which under Mugabe was frequently accused of helping to fix elections in favor of the ruling ZANU-PF party.

"We want a proper result to be announced. We will pursue all means necessary, legal, constitutional, to make sure we protect the people's vote."

Chamisa claimed that based on the opposition's own count he won 56 percent. He was asked for evidence but didn't share it, instead saying the electoral commission "didn't want to listen to us."

Opposition allegations of foul play in Monday's election had already sparked a deadly crackdown on protesters in Harare on Wednesday when troops opened fire, killing six.

ZEC officials have robustly denied allegations of bias or rigging, and international observers have largely praised the conduct of election day itself.

But EU monitors said that Mnangagwa, who enjoyed tacit military support and control of state resources, benefited from an "un-level playing field".

The Zimbabwe Election Support Network, a non-partisan observer group, estimated Chamisa could have won up to 47.8 percent of the vote based on its monitoring work.

President Cyril Ramaphosa of neighbouring South Africa was the first key partner to congratulate Mnangagwa, calling on all Zimbabweans to accept the result.

Mnangagwa, who was chosen to lead ZANU-PF in November after the brief military intervention that deposed Mugabe, hailed the victory as a "new beginning" for Zimbabwe.

The 75-year-old Mnangagwa, Mugabe's former enforcer and confidante, said he was "humbled" by the victory and in a Twitter post urged Zimbabweans to stay peaceful.

The president later denounced the police's actions against journalists and defended his victory, saying that "we won the election freely and fairly, and have nothing to hide or fear."

Troops were not visible on Harare's streets but water cannons and police remained present at the headquarters of the main opposition party a day after authorities raided it and made 18 arrests. Chamisa accused them of seeking what he called evidence of vote-rigging.

In the suburb of Mbare, jubilant ZANU-PF supporters waved party banners as music blared from a car.

"This is a new Zimbabwe, we are happy," said Tendai Mugadzi, a 32-year-old IT specialist.

He was untroubled that Mnangagwa had won by a wafer-thin margin.

"It just shows that this was a free and fair election," he said.

Mnangagwa has tried to recast himself as a voice of change, declaring that the once-prosperous Zimbabwe is "open for business" and inviting the Western election observers who for years had been banned by Mugabe.

If this election is judged credible, it will be a big step toward the lifting of international sanctions on this southern African nation whose economy has long collapsed and whose reputation has suffered after years of repression of the opposition and allegedly rigged votes.

Charles Laurie of analysts Verisk Maplecroft said that after taking over from Mugabe, "Mnangagwa's task was not just to win the election, but to convince the international community of a new Zimbabwe by winning it cleanly and fairly".

"The killing of six protestors and questions over his government's conduct at the polls, means Mnangagwa drags virtually all of Mugabe's baggage into his presidency," he added.

He called the swift crackdown on protests "a stark demonstration of how Mnangagwa intends to rule".

Chamisa urged opposition supporters to refrain from violence, stressing he would challenge the results through the courts -- though such a move appears to offer the MDC little hope of overturning the outcome.

Since independence from Britain in 1980, Zimbabwe has known only two presidents -- Mugabe, who ruled with an iron fist for 37 years, and his onetime right-hand man Mnangagwa.

Mnangagwa was allegedly involved in voter intimidation during the 2008 elections when then opposition leader Morgan Tsvangirai pulled out of the run-off after at least 200 of his supporters were killed in attacks.

The new president had promised a free and fair vote that would turn the page on years of brutal repression, end Zimbabwe's international isolation and attract badly needed foreign investment.

He faces massive challenges in his promise to restore an economy that Mugabe left in disastrous shape, presiding over the seizure of white-owned farms, a hyperinflationary surge and an investment exodus.

Previously solid health and education services are in ruins, while millions of Zimbabweans have fled abroad to seek work.

"We cannot even tell where we are going from here," said Stephen Nyangani, a 34-year-old clothes designer in Harare who does not earn enough to pay for school fees for his two children.

"I doubt our lives will improve," he added.