Number of confirmed Ebola cases rises to 13 in Congo 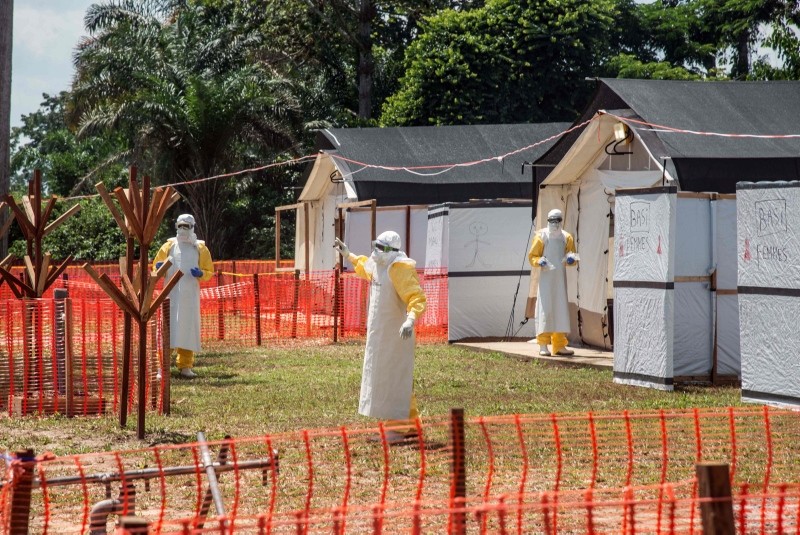 In this file photo taken on June 1, 2018 health workers operate within an Ebola safety zone in the Health Center in Iyonda, near Mbandaka. (AFP Photo)
by Associated Press
Aug 04, 2018 12:00 am

The number of confirmed cases in Congo's new outbreak of the Ebola virus has risen to 13, including three deaths, the health ministry said late Saturday.

The World Health Organization has warned that this new outbreak of the deadly virus in North Kivu province poses a particular challenge as the region is a "war zone" with several active armed groups and thousands of displaced people.

The nearby city of Beni and heavily traveled borders with Uganda and Rwanda also complicate efforts to contain the disease, which is spread via contact with the bodily fluids of those infected, including the dead.

Congo announced the latest outbreak on Wednesday with four confirmed cases, a week after declaring the end to a previous outbreak in the northwest with 33 deaths.

The swift vaccinations of more than 3,300 people helped in containing the previous outbreak, and WHO has said it hopes to know as early as Tuesday whether the Ebola strain in this new outbreak is the one for which the vaccine can be used.

The WHO emergencies director has said 3,000 vaccine doses are still in Congo's capital after being positioned there for the earlier outbreak. WHO can mobilize up to 300,000 more doses "at very short notice," Dr. Peter Salama said Friday. Congo's health ministry said vaccines would be moved from Kinshasa to Beni as soon as the "cold chain" to keep them at the optimal temperature of minus 70 degrees Celsius is reached.

Congo has dealt with Ebola for decades and this is its tenth outbreak of the virus. Ebola, first identified in the country in 1976, jumps to humans from animals including bats and monkeys. There is no specific treatment, and the virus can be fatal in up to 90 percent of cases, depending on the strain.

WHO has said the "signal event" in the new outbreak was the death of a 65-year-old woman who had been admitted to the hospital in Mangina village. "She was buried, we believe, in an unsafe burial in terms of Ebola standards and seven deaths have occurred in her immediate family," Salama said.

Congo's health ministry said health officials also were looking at suspected cases in the neighboring province of Ituri to the north, which also shares a short stretch of border with South Sudan. The ministry said overall more than 875 contacts had been registered as teams try to track down anyone who might have been in touch with those infected.

With the region's armed groups in mind, the ministry said it was working with Congo's defense ministry and the U.N. peacekeeping mission on security for health workers and the community at large.