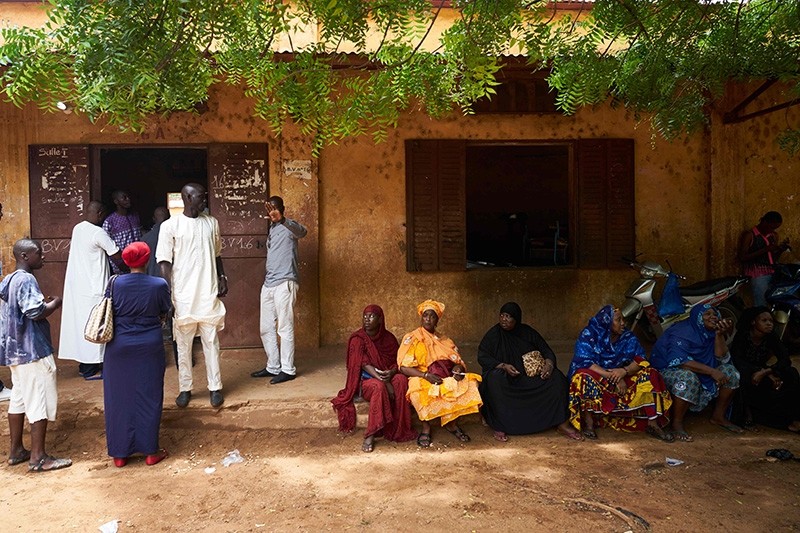 People queue outside to vote at a polling station in Bamako on Aug. 12, 2018 during the second round of Mali's presidential election. (AFP Photo)
by Compiled from Wire Services Aug 12, 2018 12:00 am

Mali's second-round presidential election Sunday was marred by violence at the polls in the sprawling West African nation threatened by rising extremist violence.

Counting was underway in some of the 23,000 polling stations across the country after voting ended at 1800 GMT.

Polls opened to light rain and light turnout, amid worries that the vote would trigger violence. In the July 29 first-round presidential vote, extremists killed three election workers and destroyed some voting materials.

Nearly 43 percent of voters made it to the polls last month and at least 671 polling stations were closed. Despite the relatively low turnout officials called the vote well-conducted.

Mali has grown more insecure since Keita beat Cisse in a second-round election in 2013.

Malian authorities arrested three terrorists on Friday who said they were preparing to carry out an attack during the vote in Bamako, said Mali army spokesman Col. Idrissa Traore on Sunday.

Terrorists are staging more bold attacks that have spread to central Mali, where both Daesh and al-Qaida-linked militants are present. Deadly communal clashes between ethnic groups and accusations of heavy-handed counter-terror operations have caused even deeper tensions and mistrust of the state.

Still, a second term for Keita, 73, seems likely. He received 41.7 percent of the vote in the first round from a field of 24 candidates and has gained endorsements from some other candidates.

Keita cast his vote in Bamako shortly after 0900 GMT Sunday and warned against "staged" electoral fraud after accusations of ballot box stuffing and other irregularities.

"How could you stage fraud when you are assured of the support of your people?" Keita said.

In at least five stations in the capital of Bamako, voting reports -- which give the number of voters and votes cast for each candidate -- were signed before the numbers were filled in, an AFP journalist witnessed.

"It is like signing a blank cheque," a source close to the organisation of the poll said. "You can imagine what happens in the rest of the country."

"I hope that everyone will be very vigilant," he said, saying that any suspected attempts at fraud should be reported to police. "Ultimately this election must end as it should, with the celebration of democracy ... This is what we hope for in our hearts.

Cisse, 68, who placed second in the first round with nearly 18 percent of the vote, has blamed Keita for insecurity, violence and corruption. His opposition party also alleges there was voting fraud in July. Cisse has not received major endorsements from failed candidates but does have the backing of a popular spiritual leader Mohamed Ould Bouye Haidara.

"This time, I have a good feeling," Cisse has said.

His campaign director Tiebile Drame charged there were cases of stuffing of ballot boxes in several northern locations. However the constitutional court on Wednesday said it has registered more than 10 requests from the opposition over various anomalies in the first round, but most were declared inadmissible.

On Saturday, the opposition organized a march "to warn against the fraud."

Issa Namory Keita, a 57-year-old retiree, said he would vote for the incumbent, Keita.

"Unlike his challenger, my candidate knows the country well and it is he who has the solution to the problems," he said.

Another voter who was unrelated but with the same family name, Fanta Keita, said she will also vote for the current president.

"He is a man who loves his country, he is a worker who has opened several development sites and I hope he continues his work," she said.

Voter turnout trickled throughout the day and was expected to remain low. Some people have fled areas of violence until the vote is over.

In central Mali, attacks have become more frequent amid communal clashes as neighbors suspect one another of being recruited by extremist groups. Meanwhile, Malian soldiers in recent months have been accused of abuses, including extrajudicial killings, during counter-terror operations.

On Wednesday, armed men attacked the Boni prefecture, according to a Malian security official who spoke on condition of anonymity because the official was not permitted to speak to the press. The armed men killed the prefect's secretary.

Malian authorities have tried to reassure the public and encourage them to go to the polls for the second round.

Residents in central Mali, however, have said they don't see the increased security. Many in the municipalities of Pignariba, Lowel-Gueou and Bara-Sara have said they likely won't be able to vote.