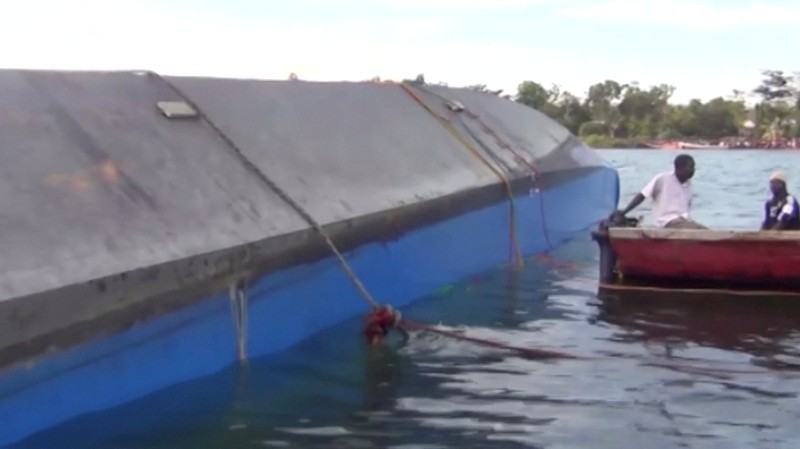 Rescue workers examine the hull of a ferry that overturned in Lake Victoria, Tanzania September 21, 2018, in this still image taken from video. (Reuters Photo)
by Sep 20, 2018 12:00 am
Dozens more bodies were recovered on Friday, the morning after a Tanzanian ferry disaster, nearly doubling the death toll to 136, with hundreds more feared missing as rescuers resumed searching for survivors at first light.

The higher death toll was given to the Citizen newspaper by John Mongella, regional commissioner for the port of Mwanza on the coast of Lake Victoria, where the MV Nyerere sank on Thursday afternoon.

Initial estimates suggested that the ferry was carrying more than 300 people when it went down on Thursday afternoon, just a few metres from the dock on Ukerewe, the lake's biggest island, which is part of Tanzania.

Thirty-seven people had been rescued from the sea, Jonathan Shana, the regional police commander for Mwanza, told Reuters by phone on Friday.

Shana said more rescuers had joined the operation when it resumed at daylight on Friday. He did not give exact numbers.

The precise number of those aboard the ferry when it capsized was hard to establish since crew and equipment had been lost, officials said on Thursday.

Tanzania has been hit by several major ferry disasters over the years. At least 500 people were killed when a ferry capsized in Lake Victoria in 1996. In 2012, 145 people died when a ferry sank off the shore of Tanzania's Indian Ocean archipelago of Zanzibar.