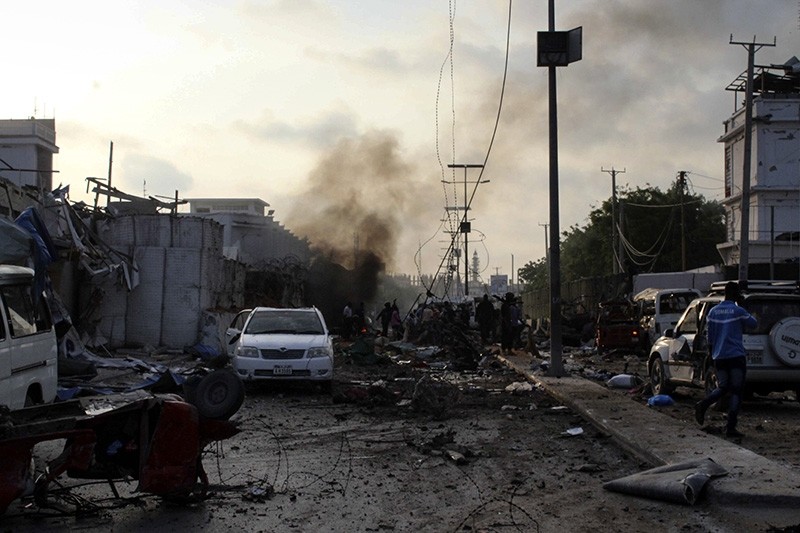 The death toll from a triple car bombing in Somalia's capital Mogadishu has risen to 40, including seven terrorists, a senior police officer said on Saturday, with up to 50 people injured.

The death toll stood at 32 on Friday, but more civilians succumbed to their injuries by Saturday. "We have records that eight wounded civilians passed away in two different hospitals in the city," senior police officer Ali Hassan said.

Mohamed Yusuf, the director at one of those hospitals, Madina Hospital, told dpa that they had received 27 wounded people and that three of them died later from their wounds.

"Some families are searching for their loved ones because they are still missing, as several whose bodies were burned badly beyond recognition were found in civilian vehicles," Hassan said.

After the three explosions in front of the hotel, a fourth blast hit as medics attempted to rescue the injured.

Capt. Mohamed Hussein said the bombs detonated near the perimeter wall of the Sahafi Hotel, which is located across the street from the Somali Police Force's Criminal Investigations Department.

Some of the victims were burned beyond recognition when one car bomb exploded next to a minibus, he said.

"The street was crowded with people and cars, bodies were everywhere," said Hussein Nur, a shopkeeper who suffered light shrapnel injuries on his right hand. "Gunfire killed several people too."

Somali security forces shot dead four gunmen who tried to storm through a hole in the hotel's wall but did not succeed in entering, he said.

Terrorist group al-Shabab claimed responsibility for the bombs, according to the group's Adalus radio station.

According to the official news agency of Somalia, six of the attackers were killed by security forces, while three suicide bombers blew themselves up.

"We strongly condemn the terrorist attacks perpetrated in Mogadishu, causing death and injury of numerous persons," the ministry said in a statement.

"We wish God's mercy upon those who lost their lives, a speedy recovery to the wounded and convey our condolences to the friendly and brotherly government and people of Somalia," the statement added.