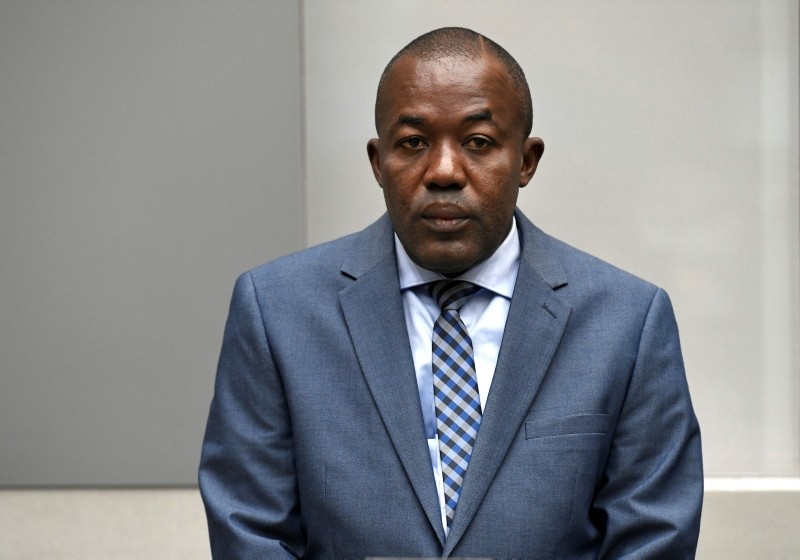 Alfred Yekatom, a Central African Republic lawmaker and militia leader who goes by the nickname Rambo, appears before the International Criminal Court, ICC, in The Hague, Netherlands, Friday Nov. 23, 2018. (AP Photo)
by Associated Press Nov 23, 2018 12:00 am

A Central African Republic militia leader and lawmaker who goes by the nickname Rambo appeared at the International Criminal Court (ICC) on Friday, where he faces 14 charges of war crimes and crimes against humanity, including murder, torture and using child soldiers during his country's bitter conflict.

Prosecutors at the global court allege that 43-year-old Alfred Yekatom commanded some 3,000 fighters in a predominantly Christian militia that killed Muslims in attacks between December 2013 and August 2014 in and around the capital, Bangui.

At his first appearance before ICC judges since his transfer to the Netherlands over the weekend, Yekatom confirmed his name, age and that he had read the charges in his arrest warrant. He wasn't required to enter a plea at the 35-minute hearing.

During his appearance Friday, Yekatom told the court he was beaten and tortured after his arrest late last month in parliament.

Defense lawyer Xavier-Jean Keita told Presiding Judge Antoine Mindua that Yekatom says he was beaten with a Kalashnikov rifle butt after he was arrested last month after firing gunshots in parliament. Keita also said Yekatom was held illegally following his arrest and before he was put on a plane to The Hague, where the court is based.

Mindua set April 30 as the date for a hearing at which judges will listen to prosecution evidence before considering whether to confirm the charges against Yekatom and order him to stand trial.

The Central African Republic has been plagued by interreligious and intercommunal fighting since 2013, when predominantly Muslim Seleka rebels seized power in the capital and mainly Christian anti-Balaka militias fought back. The violence left thousands of people dead and displaced hundreds of thousands more.

The government asked the ICC in May 2014 to investigate crimes allegedly committed by both the Seleka and the anti-Balaka. So far, no Seleka fighters have been publicly targeted by the court's chief prosecutor, Fatou Bensouda.

Yekatom's arrest warrant says he used "violent and inflammatory rhetoric" and ordered his forces to "kill Selekas and Muslims" and destroy their homes as well as a mosque.