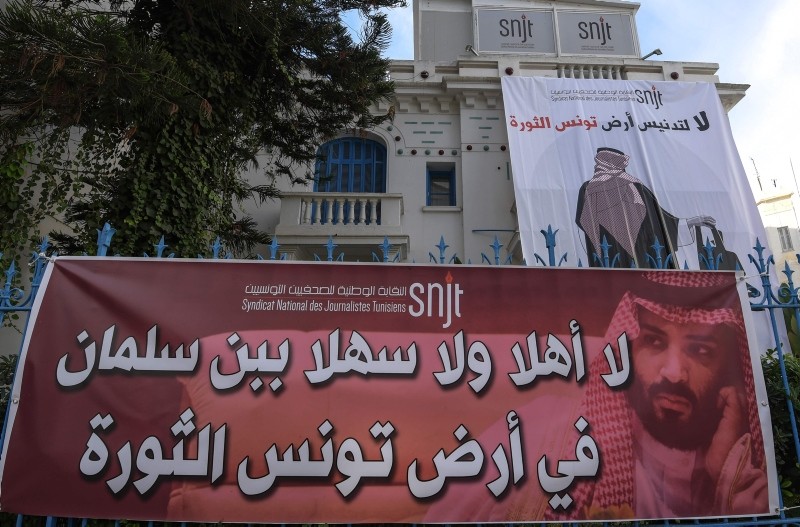 According to Abdel Samad, local rights groups also plan to file a lawsuit against bin Salman at an international court for what she described as "war crimes committed by the Saudi regime in Yemen".

For its vocal opposition to bin Salman's planned visit, the journalists' syndicate received a note of thanks from the Brussels-based International Federation of Journalists, Abdel Samad said.

"Tunisians reject the war crimes being committed in Yemen and the obvious human rights transgressions against Saudi activists like Jamal Khashoggi," she added.

A frequent contributor to The Washington Post, Khashoggi went missing on Oct. 2 after entering the Saudi consulate in Istanbul.

After initially denying knowledge of the journalist's whereabouts, the Saudi authorities later admitted that Khashoggi had in fact been killed inside the consulate, albeit by rogue Saudi agents.

Earlier Monday, a group of 50 Tunisian lawyers announced that they, too, had filed a lawsuit against the Saudi crown prince's planned visit.

"We have officially requested an investigation into crimes committed by bin Salman," Nizar Boujalal, a spokesman for the lawyers, said at a press conference.

Bin Salman is slated to arrive in Tunisia on Tuesday as part of a wider tour that brought him to the United Arab Emirates -- a longstanding Saudi ally -- last Thursday.

It is the crown prince's first trip overseas since Khashoggi's murder early last month, which prompted an international media firestorm that remains ongoing despite the passage of almost two months.