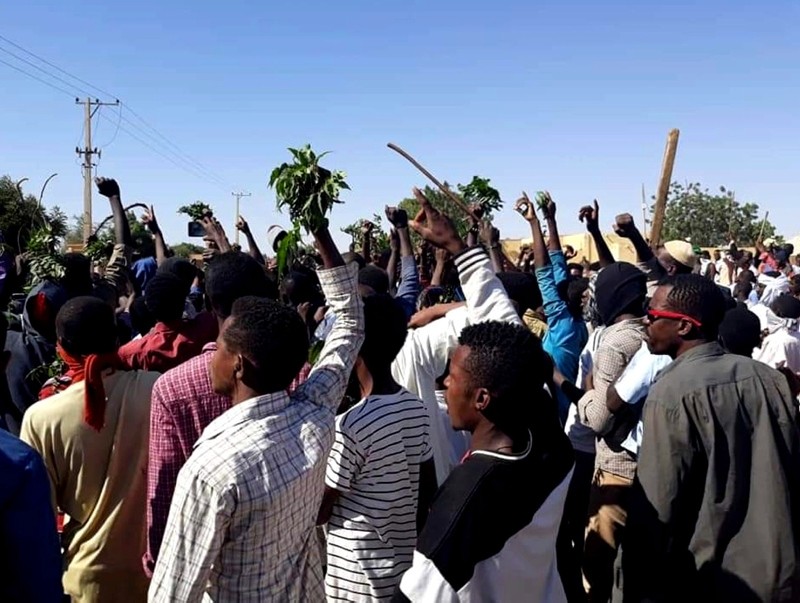 In this Sunday, Dec. 23, 2018 file handout image, provided by a Sudanese activist, people chant against the government during a protest in Kordofan, Sudan. (AP Photo)
by Compiled from Wire Services Jan 13, 2019 12:00 am

Anti-government protests that have rocked Sudan since last month over the country's deteriorating economy have left 24 people dead, an official said on Saturday, without specifying how they died.

Demonstrations that erupted in the provinces on December 19 after the government tripled the price of bread have escalated into nationwide anti-government rallies, with protesters calling for President Omar al-Bashir to resign.

"The total number of people who have died in incidents from December 19 until now is 24," Amer Mohamed Ibrahim, head of a panel set up by the prosecutor's office to investigate the violence during these rallies told reporters.

Authorities had earlier said that 22 people, including two security personnel, had been killed in the unrest.

Ibrahim said that two additional protesters who were being treated in hospital in Gadaraf, an impoverished agricultural town, had passed away, taking the overall death toll to 24.

He did not give details on the cause of the protesters' deaths. A total of 131 people were also injured during the protests, he added.

Rights groups have put the overall death toll much higher, with Human Rights Watch and Amnesty International saying that at least 40 people have been killed in clashes during the demonstrations, including children and medical staff.

Protesters have staged hundreds of demonstrations so far but riot police and security agents have broken up their rallies with volleys of tear gas.

Rights groups and the European Union have said that security forces used "live ammunition" on protesters.

The European Union said Friday that the "use of force by security forces against civilians - including the use of live ammunition - has led to further casualties over the last few days".

Sudan's own human rights body has condemned the killing "by bullets" of protesters, but stopped short of saying who fired the deadly rounds.

Bashir has blamed the violence during the protests on "conspirators" without naming them.

The protests first erupted in towns and villages before spreading to the capital, with angry crowds calling for an end to Bashir's three decades in power.

A nation of 40 million people, Sudan has struggled to recover from the loss of three quarters of its oil output-its main source of foreign currency-when South Sudan seceded in 2011.