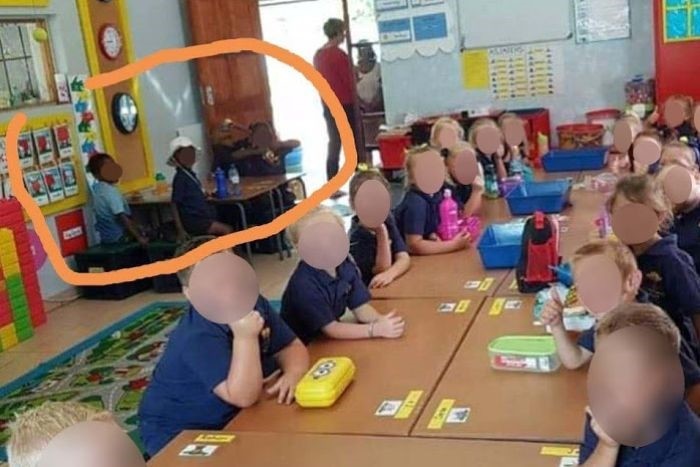 The photograph of a South African classroom appeared to show black and white children separated by race, stirring allegations of racism against a school that says it has moved a long way toward integration since white minority rule.

The uproar over the alleged segregation of 5-year-old children follows periodic disputes about race in a country that took big strides toward reconciliation when the bitter era of apartheid ended in 1994 but still struggles with the legacy of its past. It was amplified as the photograph circulated on social media, prompting protesters, investigators and concerned parents to converge on the school in Schweizer-Reneke, a rural town.

Provincial authorities are investigating and South Africa's human rights commission intends to visit the Laerskool Schweizer-Reneke for a second time on Monday after protests disrupted plans to go there earlier. A teacher was suspended pending an inquiry into the photo, which shows four black children sitting in a corner and a larger group of white children sitting in the middle of the room.

"As a general rule, such separation would on the face of it amount to, among others, unfair discrimination as all learners in a similar situation need to be treated the same," Andre Gaum, head of the human rights commission, said in an interview with Jacaranda FM, a South African radio station.

Some commentators say the investigation should run its course, noting some photos that emerged later show the same white and black children sitting together and interacting.

Jozeph du Plessis, chairman of the school's governing body, has said he was initially angered when he saw the photograph showing the white and black children in different groups. He has speculated that the children were separated in that way because the black students did not speak Afrikaans as well as the white children. Afrikaans derives from mainly Dutch settlers who arrived in South Africa in the 17th century.

"The governing body does not condone any distinction based on race. Learners from different backgrounds, including race, religion and language, are not merely accommodated but are fully integrated in all aspects of the school environment," the school's governors said in a statement, according to South African media.

For many South Africans, the image evoked memories of apartheid, when segregated schools were a key tool of a white minority seeking to maintain its supremacy over a black majority whose education was of a far lower quality. The 1976 uprising by black students that started in Soweto, and was crushed in a deadly crackdown by security forces, was a reaction to the mandated use of Afrikaans as a language of instruction in black schools.

"Schweizer-Reneke school takes us back to the Stone Age," read the headline of an editorial in the Sunday Times, a South African newspaper.