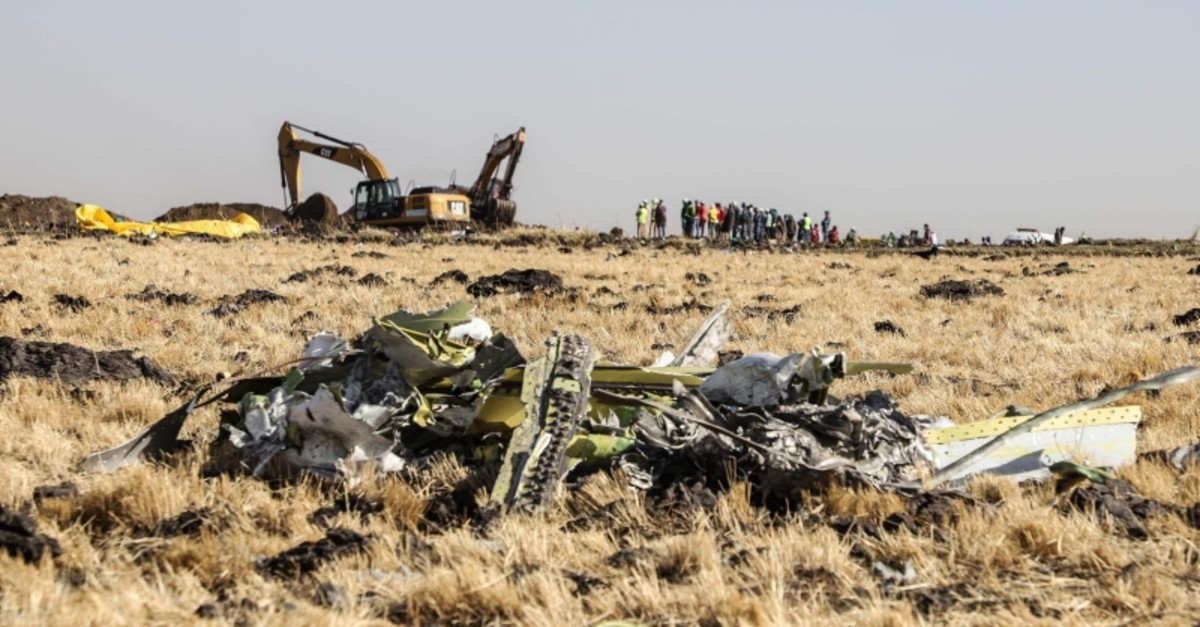 A power shovel digs next to debris at the crash site of Ethiopia Airlines near Bishoftu, a town some 60 kilometres southeast of Addis Ababa, Ethiopia, on March 11, 2019. (AFP Photo)
by Compiled from Wire Services Mar 11, 2019 1:38 pm

Investigators have recovered both black box recorders from the Ethiopian Airlines Boeing 737 that crashed just outside Addis Ababa, killing all 149 passengers and eight crew, the carrier said Monday.

"The Digital Flight Data Recorder (DFDR) and Cockpit Voice Recorder (CVR) of ET302 have been Recovered," the state-owned airline announced on Twitter.

An airline official, however, told The Associated Press that the box is partially damaged and that "we will see what we can retrieve from it."

The passenger jet bound for Nairobi crashed minutes after take-off, raising questions about the safety of the Boeing 737 MAX 8, a new model that also crashed in Indonesia in October.

Ethiopia's parliament declared Monday a day of mourning over the crash of the Ethiopian Airlines jet, which plowed into a field some 60 kilometers (40 miles) east of Addis Ababa on Sunday -- just six minutes after taking off from the capital on a flight to Nairobi.

One witness told AFP the plane was on fire before crashing, and swerving erratically.

As inhabitants of the remote, rural part of Ethiopia looked on from behind a security cordon, inspectors early Monday searched the site for plane debris, passenger belongings and human remains.

The single-aisle Boeing left a deep, black crater at the impact site, which was being dug up with a mechanical excavator.

China, too, ordered domestic airlines to suspend commercial operation of the Boeing 737 MAX 8. The country had eight nationals among the 157 people -- 149 passengers and eight crew -- aboard the ill-fated flight ET 302.

Boeing, however, said Monday it is not issuing new guidance to airlines about its 737 Max 8 aircraft after the second fatal crash.

A statement Monday referred questions about the grounding of planes to airlines and aviation authorities. It said "at this point, based on the information available, we do not have any basis to issue new guidance to operators."

Boeing has described the MAX series as its fastest-selling airplane ever, with more than 4,500 orders placed by July 2018 from 99 customers worldwide.

The plane that crashed Sunday was new, delivered to Ethiopia on November 15, the carrier said.

It is the same type as the Indonesian Lion Air jet that crashed in October, 13 minutes after takeoff from Jakarta, killing all 189 people from 35 countries on board.

At least 22 U.N. staff were on the flight, many headed for an annual assembly of the U.N. Environment Programme which opened under a dark cloud in Nairobi Monday.

Delegates arrived with the U.N. flag flying at half-mast, hugging and comforting one another as they wondered who among the staff may have been on the plane.

Among the dead were staff from the World Food Programme, the U.N. refugee agency (UNHCR), the International Organization for Migration, and Food and Agriculture Organization, the agencies said.

Nairobi hosts the global headquarters of UNEP and U.N. Habitat, and is the regional seat of several other UN agencies.

"Deeply saddened by the news this morning of the plane crash in Ethiopia, claiming the lives of all on board," tweeted U.N. Secretary General Antonio Guterres.

One witness, Tegegn Dechasa, told AFP at the site that "the plane was already on fire when it crashed to the ground. The crash caused a big explosion."

Another, farmer Sisay Gemechu, said: "The plane seemed to be aiming to land at a nearby level open field, but crashed before reaching there."

Ethiopian Airlines said the pilot had been given clearance to turn around after flagging difficulties to airport authorities.

"A committee comprising of Ethiopian Airlines, Ethiopian Civil Aviation Authority and Ethiopian Transport Authority has been set up to carry out the investigations," the airline said.

"Once the... deceased are identified, their bodies will be delivered to their families and loved ones."

Details of the passengers have started to emerge.

Among them was Cedric Asiavugwa, a Kenyan third-year student at Georgetown University Law School in Washington, who had been due to graduate in the spring and was visiting home, the university said.

Kenya had the highest death toll with 32, according to the airline.

Canada followed with 18 victims, including Nigerian-born author Pius Adesanmi, who directed the Institute of African Studies at Carleton University.

The airline said Ethiopia had nine victims, then Italy, China, and the United States with eight each. Britain and France each had seven people on board, Egypt six, and Germany five -- though the breakdown was not final.

Slovak MP Anton Hrnko was among the bereaved.

"It is with deep sorrow that I announce that my dear wife, Blanka, son Martin and daughter Michala, died in the air disaster in Addis Ababa this morning," he wrote on Facebook.

The U.S. National Transportation Safety Board said it would send investigators to assist, and Canada deployed consular officials to Addis Ababa.

Canadian Prime Minister Justin Trudeau and his British counterpart Theresa May both described the news as "devastating."

Ethiopian Airlines CEO Tewolde GebreMariam said the plane had flown in from Johannesburg earlier Sunday, spent three hours in Addis and was "despatched with no remark," meaning no problems were flagged.