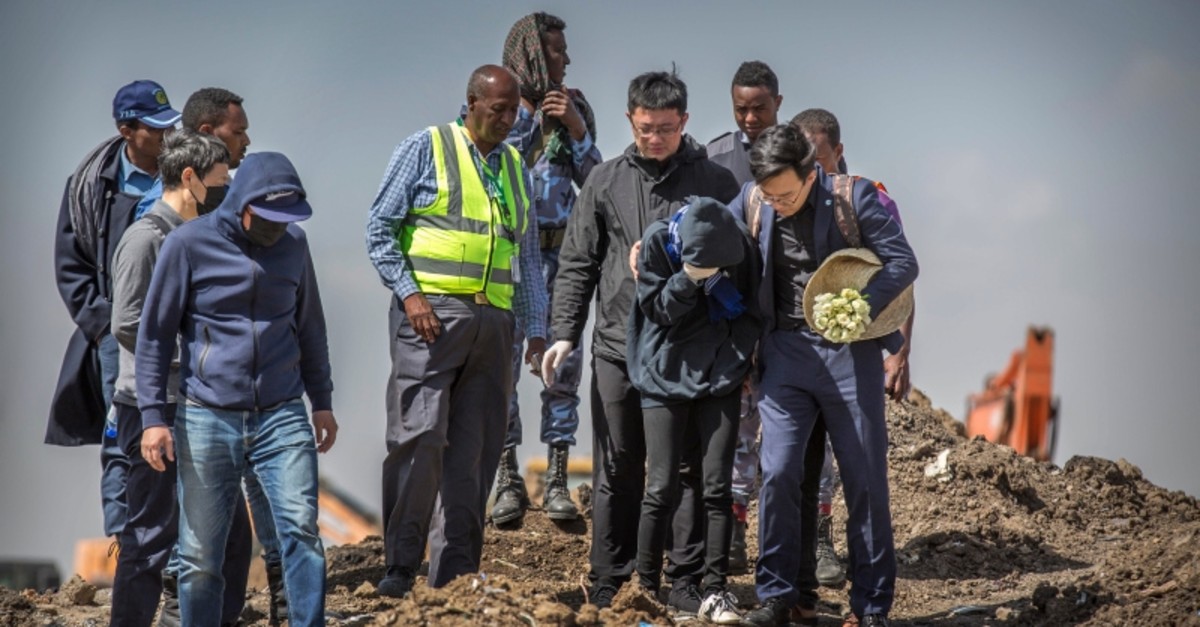 Chinese relatives of victims who died in the crash visit and grieve at the scene where the Ethiopian Airlines Boeing 737 Max 8 crashed, on Wednesday, March 13, 2019. (AP Photo)
by Compiled from Wire Services Mar 13, 2019 9:01 pm

Germany's Federal Bureau of Aircraft Accident Investigation (BFU) will not analyze the black box from an Ethiopian Airlines passenger jet that crashed soon after take-off from Addis Ababa on Sunday, a spokesman said Wednesday.

"This is a new type of aircraft with a new black box, with new software. We can't do it," BFU spokesman Germout Freitag said.

A spokesman for Ethiopian Airlines had said earlier that the black boxes recovered from the crashed plane, a Boeing 737 Max 8, would be sent to Germany for analysis.

An Ethiopian Airlines spokesman said Wednesday that the airline has "a range of options" for the data and voice records of the flight's last moments, as much of the world grounded or barred the plane model and grieving families arrived at the disaster site.

"What we can say is we don't have the capability to probe it here in Ethiopia," Asrat Begashaw said. An airline official has said one recorder was partially damaged.

The Boeing 737 Max 8 aircraft crashed six minutes after takeoff Sunday, killing all 157 people on board. The disaster is the second with a Max 8 plane in just five months.

While some aviation experts have warned against drawing conclusions until more information on the latest crash emerges, much of the world, including the entire European Union, has grounded the Boeing jetliner or banned it from their airspace. Ethiopian Airlines, widely seen as Africa's best-managed airline, grounded its remaining four 737 Max 8s.

That leaves the United States as one of the few remaining operators of the plane.

"Similar causes may have contributed to both events," European regulators said, referring to the Lion Air crash in Indonesia that killed 189 people last year.

Others took action on Wednesday. Lebanon and Kosovo barred the Boeing 737 Max 8 from their airspace, and Norwegian Air Shuttles said it would seek compensation from Boeing after grounding its fleet. Egypt banned the operation of the aircraft. Thailand ordered budget airline Thai Lion Air to suspend flying the planes for risk assessments. Lion Air confirmed reports it has put on hold the scheduled delivery of four of the jets.

The U.S.-based Boeing has said it has no reason to pull the popular aircraft from the skies and does not intend to issue new recommendations about the aircraft to customers.

Boeing's CEO Dennis Muilenburg also spoke with President Donald Trump and reiterated that the 737 Max 8 is safe, the company said. Its technical team, meanwhile, joined American, Israeli, Kenyan and other aviation experts in the investigation led by Ethiopian authorities.

The Federal Aviation Administration also backed the jet's airworthiness and said it was reviewing all available data. "Thus far, our review shows no systemic performance issues and provides no basis to order grounding the aircraft," acting FAA Administrator Daniel K. Elwell said in a statement. "Nor have other civil aviation authorities provided data to us that would warrant action."

Some aviation experts have warned that finding answers in this crash could take months.

An Ethiopian pilot who saw the crash site minutes after the disaster told the AP that the plane appeared to have "slid directly into the ground."

Asrat, the Ethiopian Airlines spokesman, told the AP that the remains of victims recovered so far were in freezers and that forensic DNA work for identifications had not yet begun.

The dead came from 35 countries. The airline has said identifying them should take five days.

More devastated families arrived at the crash site on Wednesday, some supported by loved ones and wailing.