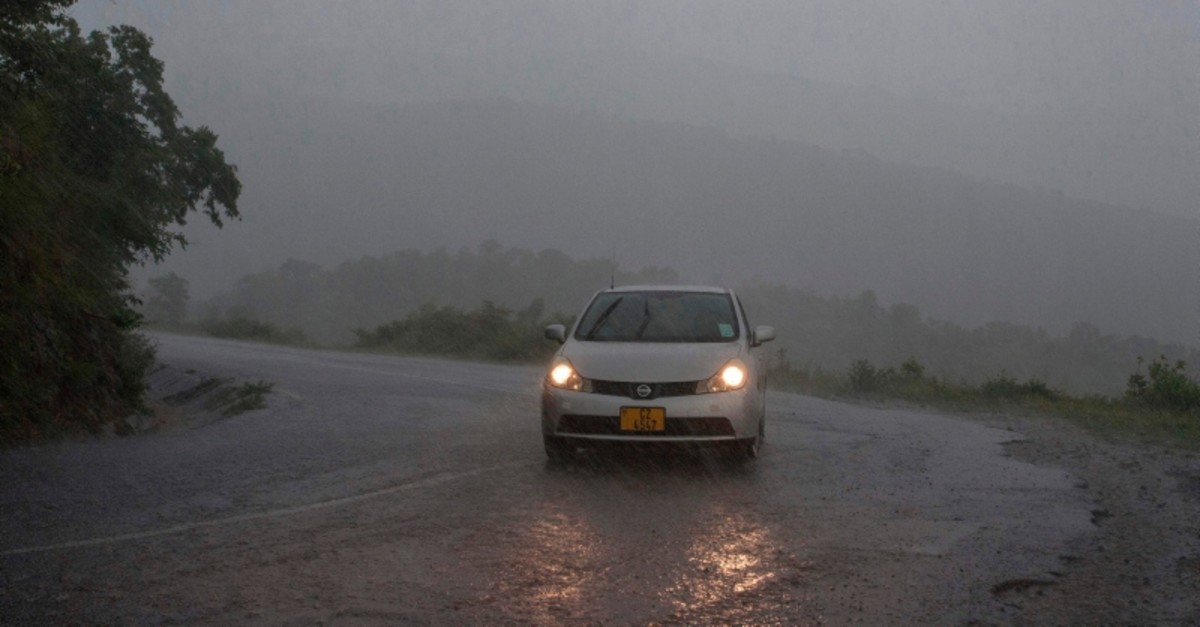 | This picture taken on March 15, 2019 shows a vehicule as rain, which is believed to be the beginning of Tropical cyclone Idai coming from central Mozambique, falls in the flooded districts of Chikwawaa and Nsanje in southern Malawi (AFP Photo)
by Compiled from Wire Services Mar 16, 2019 12:00 am

Mozambique, Zimbabwe and Malawi have been hit by a vicious cyclone that has killed more than 140 people, left hundreds more missing and stranded tens of thousands who are cut off from roads and telephones in mainly poor, rural areas.

U.N. and government officials report that Cyclone Idai has affected more than 1.5 million people in the three southern African countries.

Hardest hit is Mozambique's central port city of Beira where the airport is closed, electricity is out and hundreds of homes have been destroyed. The storm hit Beira late Thursday and moved westward into Zimbabwe and Malawi, affecting thousands more, particularly in eastern areas bordering Mozambique.

Homes, schools, businesses, hospitals and police stations have been destroyed by the cyclone. Thousands have been marooned by the heavy flooding.

Tropical cyclone Idai battered central Mozambique on Friday killing at least 21 people and cutting off more than half a million people in the port city of Beira.

Even before the cyclone made landfall on Friday, heavy rains earlier in the week had already claimed 66 lives and displaced 17,000 people in Mozambique, local officials said.

They had also affected neighbouring Malawi, where 56 people died and nearly a million others were affected, the government said.

As the cyclone hit, Mozambique's President Filipe Nyusi appealed for emergency assistance for the victims before leaving for eSwatini.

"We have compatriots suffering without hope and we have to restore hope," he said on Friday as he set off on a three-day state visit to the kingdom that was previously known as Swaziland.

As the cyclone approached, the Red Cross sent out more than 200 volunteers to areas most likely to be affected.

"The situation is dire but we don't know the exact particulars," said Jamie LeSueur, the Red Cross's roving emergency operations manager for Africa, who was making the 1,200-kilometre (745-mile) trip from Maputo to Beira by road after flights were cancelled and the airport closed.

Describing it as a "difficult emergency" to tackle, he told AFP said it would require "the full force of the humanitarian community behind the government of Mozambique to respond to rapidly."

Beira's international airport was closed after the cyclone made landfall, damaging the air traffic control tower, the navigation systems and the runways.

"The runway is full of obstacles and parked aircraft are damaged."

The storm also affected power supplies to neighbouring South Africa which imports electricity from Mozambique to supplement its own production.

South Africa's power utility company Eskom on Saturday introduced severe electricity rationing "due to the loss of additional capacity, which includes a reduction in imports from Mozambique," it said in a statement.