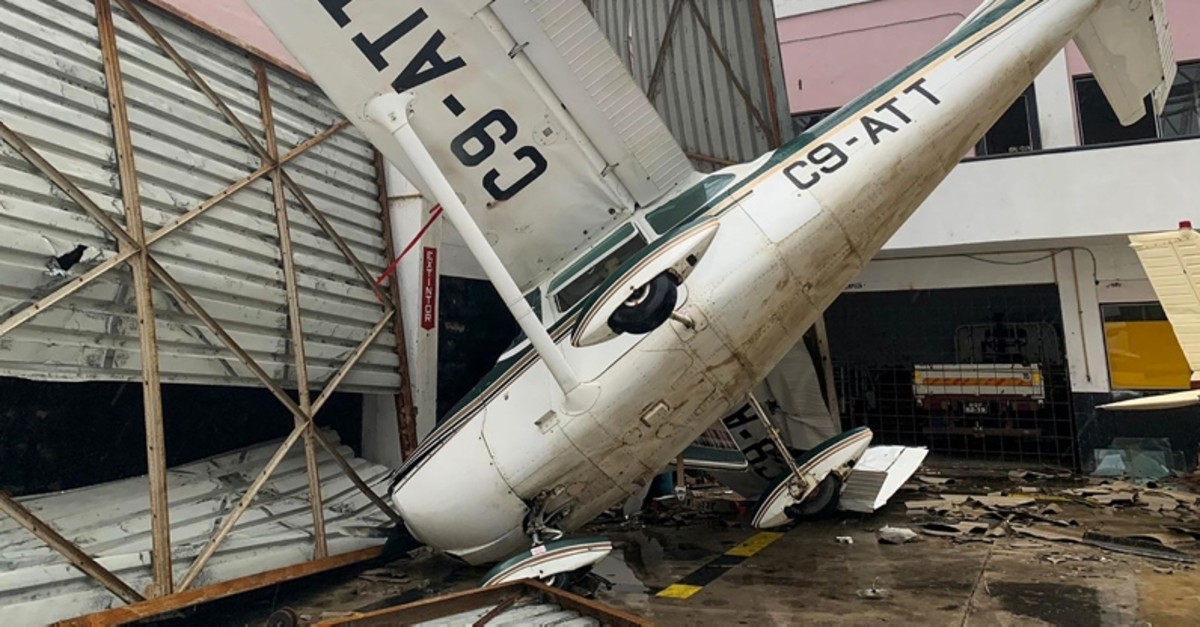 This handout picture taken and released on March 18, 2019 by the United Nations World Food Programme (WFP) shows damages at the airport in Beira, Mozambique, in the aftermath of the passage of the cyclone Idai. (AFP Photo)
by Compiled from Wire Services Mar 18, 2019 6:30 pm

The number of people killed in Cyclone Idai and recent flooding in Mozambique could rise to around 1,000, President Filipe Nyusi said on state broadcaster Radio Mozambique on Monday.

Speaking to state Radio Mozambique, Nyusi said Monday that although the official death count is currently 84, he believes the toll will be more than 1,000.

Nyusi spoke after flying over the port city of Beira and viewing the flooding and devastation. He said he saw bodies floating in the flooded areas.

Beira has been severely battered by the cyclone which cut off electricity, forced the airport to shut down and cut off road access to the rest of the country. Cyclone Idai first hit Beira last week and then moved inland to Zimbabwe and Malawi.

Cyclone Idai first hit Beira last week and then moved inland spreading heavy winds and rainfall to Zimbabwe and Malawi. More than 215 people have been killed by the storm, hundreds more are missing and more than 1.5 million people have been affected by the widespread destruction and flooding, according to the Red Cross and government officials.

The scale of the damage to Beira is "massive and horrifying," said Jamie LeSueur, who led a Red Cross aerial assessment of the city. The team had to view the city by helicopter because roads were flooded, he said.

"The situation is terrible. The scale of devastation is enormous. It seems that 90 percent of the area is completely destroyed," said LeSueur.

With Beira's airport closed, the team drove from Mozambique's capital Maputo before taking a helicopter for the last part of the journey because roads into Beira have been flooded.

While the physical impact of Idai is beginning to emerge, the human impact is unclear.

"Almost everything is destroyed. Communication lines have been completely cut and roads have been destroyed. Some affected communities are not accessible," said LeSueur.

"Beira has been severely battered. But we are also hearing that the situation outside the city could be even worse. Yesterday (Sunday), a large dam burst and cut off the last road to the city."

At least 126 people had died in Mozambique and Malawi, according to the Red Cross. In Zimbabwe, 89 people have died from the floods, the country's information ministry said Monday.

Mozambique's President Filipe Nyusi and Zimbabwean President Emmerson Mnangagwa both returned from foreign trips to attend to the emergencies caused by the storm. State radio in Mozambique reported that Nyusi planned to visit affected areas after returning Sunday from Eswatini, formerly known as Swaziland.

Zimbabwe's president returned home from the United Arab Emirates "to make sure he is involved directly with the national response by way of relief to victims of Cyclone Idai," the information ministry said. The Zimbabwean government declared a state of national disaster.

U.N. agencies and the Red Cross are helping with rescue efforts that include delivering food supplies and medicines by helicopter in the impoverished countries.