446 dead in Mozambique after Cyclone Idai 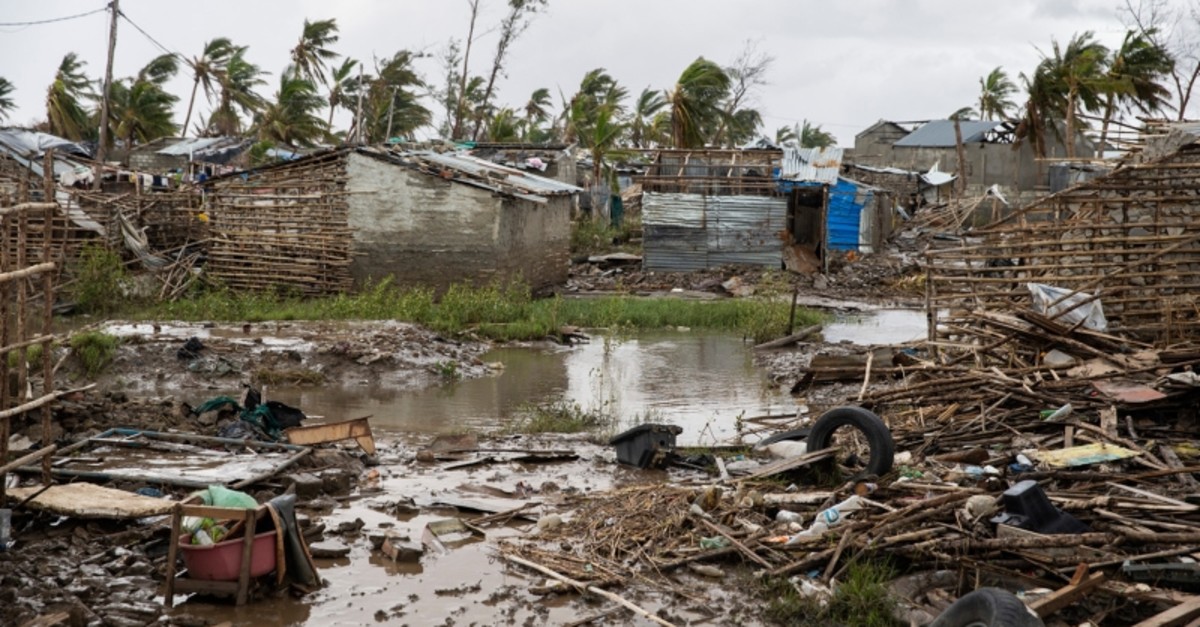 Flood water covers the ground between rubble where there once use to be houses at an informal settlement in Beira, the fourth largest city in Mozambique, on March 23, 2019. (AFP Photo)
by Compiled from Wire Services Mar 23, 2019 3:06 pm

The death toll in Mozambique has climbed to 446 after a cyclone devastated swathes of the southern African country, flooding thousands of square kilometers (miles), the government said Saturday.

Cyclone Idai smashed into the coast of central Mozambique on Friday last week, unleashing hurricane-force winds and rains that flooded the hinterland and drenched eastern Zimbabwe.

"At this time 446 deaths have been recorded," Lands and Environment Minister Celso Correia told reporters in the port city of Beira.

The new numbers take the combined death toll of the two neighboring countries to 705.

Nearly 90,000 Mozambicans have been moved into shelters, while thousands of others are still stranded in floodwaters.

The government estimates that around one million people have been affected by the storm.

"We are living an unprecedented natural disaster. A disaster that only matches major disasters," the minister said.

"Unfortunately no one in the region and in the world could predict a disaster of this size," he said as the U.N. stepped up calls for aid for the ravaged and impoverished country.

The shattered Mozambican city of Beira and other communities are now home to crowded displacement camps, both organized and informal. With communications badly affected by the cyclone and some families separated in the chaos, a program aimed at reunification is now underway.

"Every day we discover that the destruction left by Cyclone Idai is worse than we imagined," Hicham Mandoudi, the International Committee of the Red Cross's head of sub-delegation in Beira, said in a statement. "We are deeply concerned about remote communities that are cut-off by flooding and landslides and are yet to receive any humanitarian assistance. More rain is expected to come, which will compound the suffering of people who have already lost everything."

U.N. Secretary-General Antonio Guterres on Thursday appealed for stepped up support for victims of Idai, saying the U.N. and its humanitarian partners are scaling up the response but "far greater international support is needed."

The U.N. chief said in a statement that "with crops destroyed in the breadbasket of Mozambique more people are at risk of food insecurity in all three countries."

Beira, the city at the center of aid efforts for Mozambique, still can only be reached by land or sea. Local fishermen have joined the rescue efforts, ferrying stranded people about 50 or so at a time to the city's beach or port.

With mobile phone communications struggling to return, some residents have lined an overpass known for having a better chance of receiving a signal.

Prices of food and other basic items are doubling, even tripling. People wait in line outside stores, let in one by one in an effort to prevent looting.

Throughout the region, emergency air efforts focus on spotting stranded people and communities in the hope of dropping aid or plucking those in dire need to safety.

There are signs of life in the inundated landscape, even smoke from some cooking fires.

As waters recede, however, aid workers expect the death toll to rise as bodies are found.