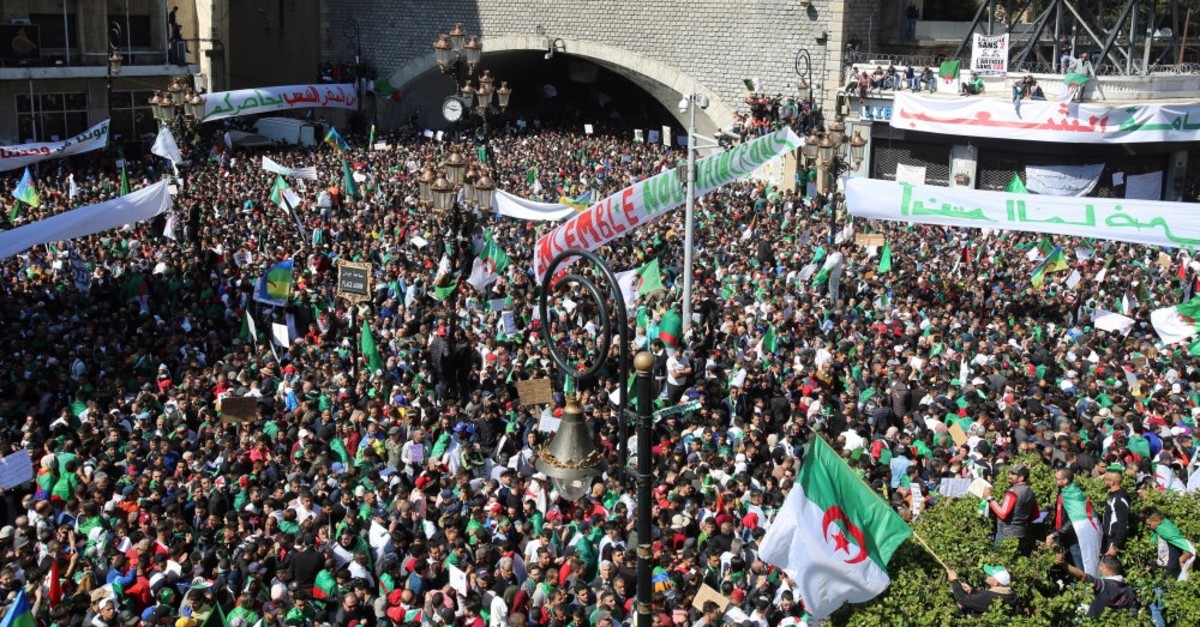 People carry national flags and banners during a protest to demand the resignation of President Abdelaziz Bouteflika, Algiers, March 29, 2019.
by Yusuf Selman İnanç Apr 02, 2019 12:07 am

Algeria's ailing President Abdelaziz Bouteflika has declared that he has changed most of his government; however, protests continue as those on the streets demand radical change in politics not a mere reshuffle

Algeria's ailing President Abdelaziz Bouteflika announced a new government on Sunday, placing new names on key ministries while keeping the current army chief. Despite the efforts made by the president and his supporters to mitigate protesters, people are still out on the streets. Clashes with police took place as protesters are still demanding that Bouteflika leave the post.

Algeria's army chief, Gen. Ahmed Gaid Salah, had stated the country should not return to the "painful years" of the civil war that lasted more than a decade and claiming thousands of lives, and had made a call last week stating that the president should be declared unsuitable for the presidential post. Despite this, the president has kept Salah on as a deputy defense minister in the cabinet, indicating that he and his supporters fear the army will be mobilized against the president and in favor of the protesters.

Meanwhile, the protesters did not leave the streets despite a cabinet reshuffle and continue to demand that the president step down. In the last few weeks there has been no big clash between protesters and security forces, but in the last few days the police have begun using rubber bullets and tear gas. It is estimated that more than 1 million people attended marches last Friday. The recent developments indicate that the number of protesters has not decreased and their demands remain unchanged. While the army does not seem to be against the people's demands, the question remains whether it will lead to the changes that people demand. Several reports in the Algerian media claim that the army is largely made up of the old ruling elite. Therefore, any change of power between Bouteflika and another figure supported by the army will not please the people.

Bouteflika, who seldom appears in public since a stroke in 2013, just returned from Geneva where he was receiving medical treatment. He has promised to make a new plan for rescheduling the vote and placing an interim government. In a letter, released by the state news agency, the president underlined the importance of putting the country in the hands of younger generations.

However, protesters fear that a puppet successor will be named and the protesters want wider change instead. In any case, the protesters may not be pleased with what will happen. Their demands are much more fundamental and comprehensive while the current administration, along with the army, is not going to allow the country to undergo a dramatic change.

The Algerian regime remained safe during the Arab Spring that euphorically swept across the Middle East and North Africa, leading to the fall of autocrat presidents of Algeria's neighbors, namely Tunisia and Libya. The Algerian people seem to be more unified than their neighbors as they have experienced an independence war and civil strife. Protesters claim that the current administration is old-fashioned and the country needs a change economically and politically.