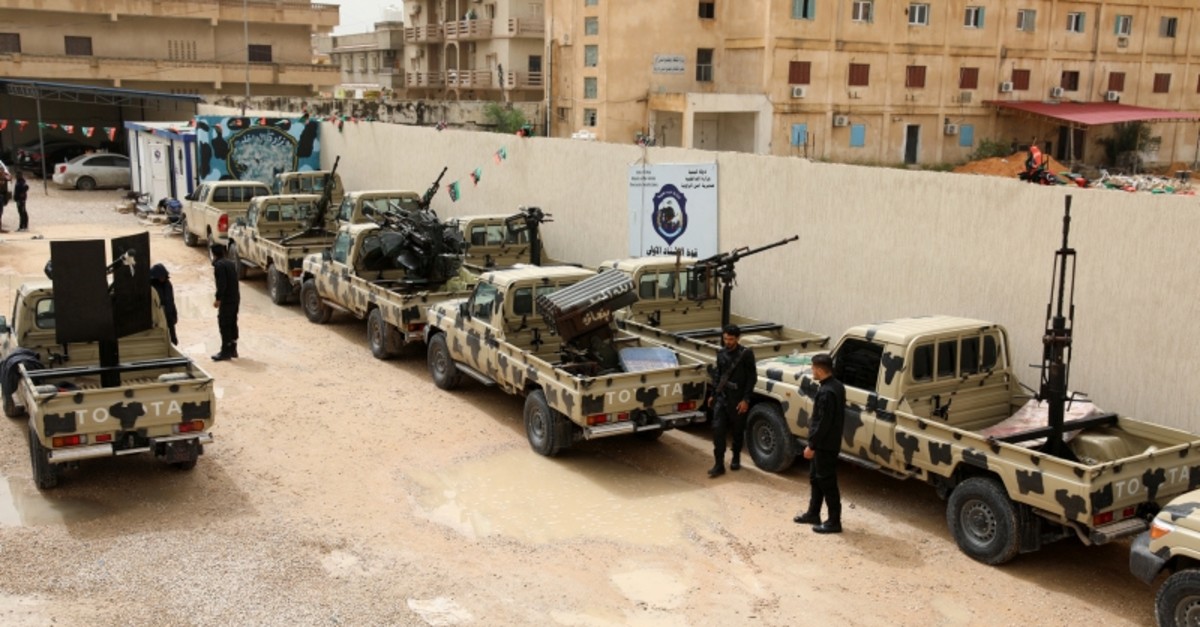 Forces loyal to the Libyan strongman Khalifa Haftar continued their advance into the country's capital and largest city Tripoli, the seat of the internationally-recognized and U.N.-backed government, despite calls from the international community urging for dialogue and threating sanctions.

Conflicting reports emerged Saturday about ongoing fighting over control in Tripoli between forces loyal to east Libya-based Haftar and opponents.

However, Fathi Bashaga, a spokesman for the Tripoli-based Government of National Accord (GNA), told Libya al-Ahrar TV that their forces had regained the airport from Haftar's forces.

"The battle will continue until the source of threat is eliminated," he said, without providing further details.

On Saturday, a source with the Libyan Presidential Guard told Anadolu Agency that Haftar forces were still in control of Qasr bin Ghashir as GNA forces were mobilizing forces to relaunch a campaign to recapture areas under Haftar's control.

The source, who preferred anonymity due to restrictions on speaking to media, attributed losing some areas to Haftar due to "the disorganization and confusion of the forces."

He also said that the emergence of "new allies for Haftar especially in Tarhona region paved the way for his forces to enter Qasr Ben Ghashir."

On Thursday, Haftar reportedly announced in a voice recording released that they had launched an offensive to seize Tripoli.

Libya has remained beset by turmoil since 2011, when a NATO-backed uprising led to the ouster and death of President Muammar Gaddafi after four decades in power.

Since then, the country's stark political divisions have yielded two rival seats of power: one in the eastern city of Al-Bayda, to which Haftar is linked, and another in Tripoli. Haftar's forces control the country's second largest city, Benghazi,

Foreign Ministers of the Group of Seven nations agreed on Saturday to put pressure on those responsible for a violent power struggle in Libya, especially commander Khalifa Haftar, to avoid a military escalation, Germany's Heiko Maas said.

"We are agreed that we must use all the possibilities at our disposal to exert pressure on those responsible in Libya especially General Haftar, so that we avoid any further military escalation. We all agreed," he told reporters.

Each country would use its own channels, said Maas, adding that Italy and France had direct contacts with Libya. "The situation is very worrying and we cannot accept a further military escalation," Maas said after a ministerial meeting.

Egyptian Foreign Minister Sameh Shoukry said on Saturday the crisis in Libya could not be resolved through military means, but added the security situation in the country had long been a source of worry.

"Egypt has supported from the beginning a political agreement as a tool to prevent any military solution" in Libya, Shoukry said during a joint news conference with visiting Russian Foreign Minister Sergei Lavrov in capital Cairo broadcast on state television.

Lavrov also called for an end to fighting and urged both parties for dialogue without preconditions, but blamed the NATO intervention against longtime dictator Moammer Gadhafi for the turmoil in the country.

The U.N. Security Council on Friday also called on Haftar to halt his advance on Tripoli, warning the military move was putting Libya's stability at risk.

The move by Haftar's forces came ahead of the U.N.-backed peace talks set for mid-April and Secretary-General Antonio Guterres was in Tripoli when their advance began.

"We are determined" to hold the talks "as scheduled" on April 14 unless prevented by serious obstacles, U.N. envoy Ghassan Salame said Saturday at a press conference in the capital.

The U.N.'s conference of key players is set to draw up a "roadmap" to lead Libya towards legislative and presidential elections.

Libya's rival leaders, GNA's Prime Minister Fayez Sarraj and Haftar, agreed in Paris last year to hold elections before the end of the year, but that vote never materialized as the two rival administrations and numerous militias grapple for power.

But Salame said Saturday: "We want to reassure Libyans that we will stay alongside the Libyan people to make the political process a success without resorting to escalation."