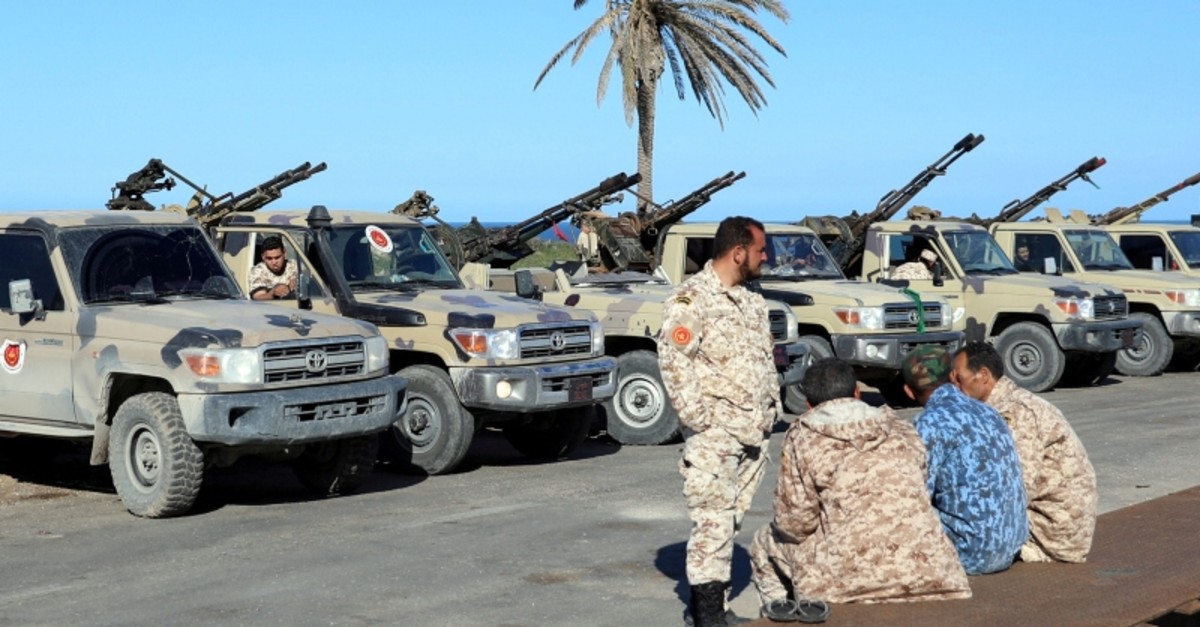 Military vehicles of Misrata forces, under the protection of Tripoli's forces, are seen in Tajura neighborhood, east of Tripoli, Libya April 6, 2019. (Reuters Photo)
by Compiled from Wire Services Apr 07, 2019 9:05 pm

Fighting raged south of Libya's capital on Sunday, emergency workers and the United Nations said, despite the U.N.'s call for a two-hour humanitarian truce for civilians and the wounded to flee.

"There was no truce, but we are still hoping for a positive response" from the warring parties, said Jean Alam, a spokesman for the U.N.'s Libya mission.

Emergency services spokesman Oussama Ali said: "So far our teams have not been able to enter" the battle zones.

UNSMIL had urged a truce between 4 p.m. and 6 p.m. local time to evacuate wounded, it said, without giving casualty figures.

The United States has temporarily withdrawn some of its forces from Libya due to "security conditions on the ground," a top military official said Sunday.

A small contingent of American troops has been in Libya in recent years, helping local forces combat Daesh and al-Qaida terrorists, as well as protecting diplomatic facilities.

"The security realities on the ground in Libya are growing increasingly complex and unpredictable," said Marine Corps Gen. Thomas Waldhauser, the head of U.S. Africa Command. "Even with an adjustment of the force, we will continue to remain agile in support of existing U.S. strategy."

He did not provide details on the number of U.S. troops that have been withdrawn or how many remain in the country.

The military conflict shaking Libya escalated Sunday as forces of strongman Khalifa Haftar launched an air strike on a suburb of Tripoli and the U.N.-backed government vowed a major counteroffensive.

Rivalries between the two camps threaten to plunge the country into a full-blown civil war after Haftar on Thursday launched an offensive on Tripoli.

Oil-rich Libya has been riven by chaos since the NATO-backed uprising in 2011 that killed dictator Moammar Gaddafi, with rival administrations and armed groups vying for power.

Repeated attempts to find a peaceful solution have failed.

After a pause overnight, fierce fighting flared anew on Sunday morning south of the capital between Haftar's self-styled Libyan National Army (LNA) and forces backing the internationally recognized Government of National Accord (GNA).

As clashes raged in the mainly farmland region of Wadi Raba and the disused international airport south of the capital, a spokesman for pro-GNA forces said a "counteroffensive" had been launched to push back Haftar's forces.

Colonel Mohamed Gnounou told reporters that operation "Volcano of Anger" was aimed at "purging all Libyan cities of aggressor and illegitimate forces," in reference to Haftar fighters.

The LNA meanwhile announced it had carried out its first air raid on a Tripoli suburb, despite calls by the international community to halt hostilities.

GNA head Fayez al-Sarraj warned on Saturday of a "war without a winner" and said that reinforcements were pouring into Tripoli from several regions.

Powerful armed groups from the western city of Misrata and fighters from Zentan and Zawiya — all battle-hardened militiamen who took part in the 2011 uprising that toppled Kadhafi — have joined the battle.

At least one armed group from Misrata known as Brigade 166 arrived Saturday in eastern Tripoli with dozens of vehicles, some mounted with anti-aircraft guns, to join the counter-offensive, an AFP photographer said.

"We are waiting for orders to repel any advance by the enemy towards Tripoli," said the group's spokesman Khaled Abu Jazia.

Sunday's LNA air raid came a day after forces backing the GNA launched air strikes on their rivals for the first time since the offensive began, with at least one targeting an LNA position south of Tripoli.

LNA spokesman Ahmed Mesmari had vowed the force would retaliate.

On Saturday he said pro-Haftar fighters were "progressing on several fronts... as planned" and that Tripoli would soon be captured.

Analysts say Haftar has been buoyed by a series of successful military operations that have brought all of the east and much of the south of Libya under his control.

A field marshal who served under Gaddafi and now backs an administration in eastern Libya opposed to the GNA, Haftar was counting on a swift battle to capture Tripoli but some experts say he miscalculated.

"To date, Haftar's operation has mostly failed to go according to plan, and it has now galvanized western Libyan forces against him," said analyst Wolfram Lacher.

"He now faces the prospect of a protracted war south of Tripoli, or of a decisive defeat," said Lacher, a researcher with the German Institute for International and Security Affairs (SWP).

As the tension mounted, Tripoli residents were seen Saturday queueing outside petrol stations and supermarkets.

The U.N. Security Council has called on Haftar's forces to halt their advance, warning it was putting Libya's shaky stability at further risk.

But U.N. envoy Ghassan Salame insisted on Saturday the April 14-16 conference would go ahead.

"We are determined" to hold the talks, he said.

Sarraj said the conference was meant to pave the way for a "stable" government and accused Haftar of "betraying" an agreement reached during a meeting in February to push for elections and a new unity government before year's end.

Haftar is "motivated by personal interests and his own delusions" and is trying to "plunge the country into a cycle of violence", said Sarraj.

On Saturday Haftar chaired a meeting with the parallel Libyan administration based in the east of the country to discuss a "security plan" for Tripoli that would be implemented at the end of the assault, his media office said.