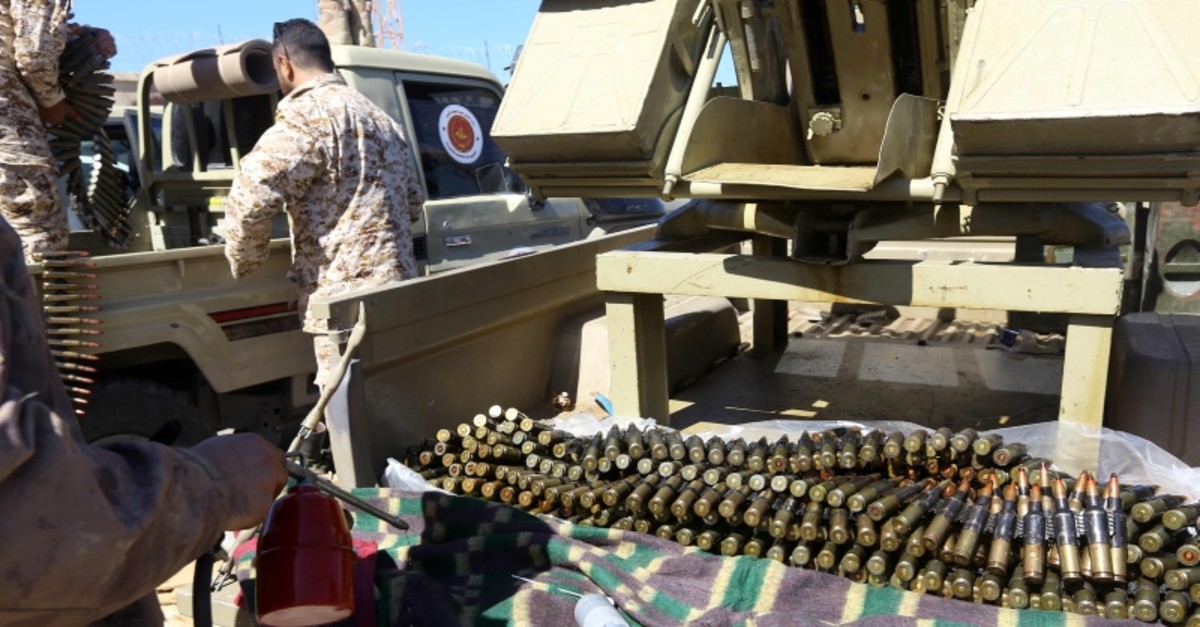 Fighters loyal to the Libyan Government of National Accord (GNA) prepare their ammunition before heading to the frontline as battles against forces of Libyan strongman Khalifa Haftar continue outside the capital Tripoli on April 8, 2019. (AFP Photo)
by Compiled from Wire Services Apr 08, 2019 1:03 pm

A warplane carried out an airstrike Monday against the Libyan capital's only functioning airport, authorities at the site said, as fighting raged for control of Tripoli.

A security source at Mitiga airport east of the city said no side had yet claimed responsibility for the raid, which hit a runway without causing casualties.

The civil aviation authority has decided "to suspend aerial traffic until further notice" to Mitiga airport, said Mohammed Gniwa, a spokesman for Libyan Airlines. An airport source, who did want to be named, confirmed the closure.

Libyan military strongman Khalifa Haftar pushed on with his assault on Tripoli Monday, defying international calls for a cease-fire days into a battle that has left dozens dead.

At least 35 people have been killed in fighting since Haftar's forces launched their assault Thursday, Libya's unity government said, while the U.N. says thousands have been displaced.

Haftar's forces have so far said 14 of their fighters have died.

Fierce clashes raged on Sunday near Tripoli between pro-Haftar fighters and troops loyal to the internationally recognized Government of National Accord (GNA).

The two sides also exchanged airstrikes days after Haftar -- who backs an administration in eastern Libya opposed to the GNA -- launched an offensive Thursday to seize the capital.

The clashes came despite calls by the United Nations, the United States, the European Union and Russia for an urgent cease-fire. A contingent of U.S. forces evacuated over the weekend.

The violence has thrown into doubt a U.N. plan for an April 14-16 conference to plan elections as a way out of the anarchy since the Western-backed toppling of Gaddafi eight years ago.

The U.N. mission to Libya called on Sunday for a truce for two hours in southern Tripoli to evacuate civilians and wounded, but it did not appear to have been heeded.

The European Union's foreign affairs chief Federica Mogherini called on Monday urged Libyan leaders to avoid any military escalation and return to negotiations. She said EU foreign ministers, who gather on Monday in Luxembourg for a regular meeting, are expected to uphold this message.

Russia on Monday also called for calm on all sides in the Libya conflict.

Kremlin spokesman Dmitry Peskov said Moscow was calling "on all sides to reject actions that could provoke bloodshed in battle and the deaths of civilians."

Spokesman Colonel Mohamed Gnounou said the operation was aimed at "purging all Libyan cities of aggressor and illegitimate forces," in reference to Haftar's fighters.

At least 2,200 people have fled from fighting south of the Libyan capital Tripoli since April 4, the United Nations humanitarian office said in a report on Monday, and many civilians were trapped and cut off from emergency services.

"The fast increasing deployment of forces could potentially result in significant population displacement," the report said. It said aid agencies on the ground had enough emergency medical supplies and trauma kits to treat up to 210,000 individuals and 900 injuries for three months.

Libya has been riven by divisions since the NATO-backed uprising in 2011 that killed dictator Muammar Gaddafi, with rival administrations and armed groups vying for power and control of the country's oil.

Haftar's offensive has threatened to plunge the country into a full-blown civil war and once again thwart diplomatic efforts to find a solution to Libya's woes.