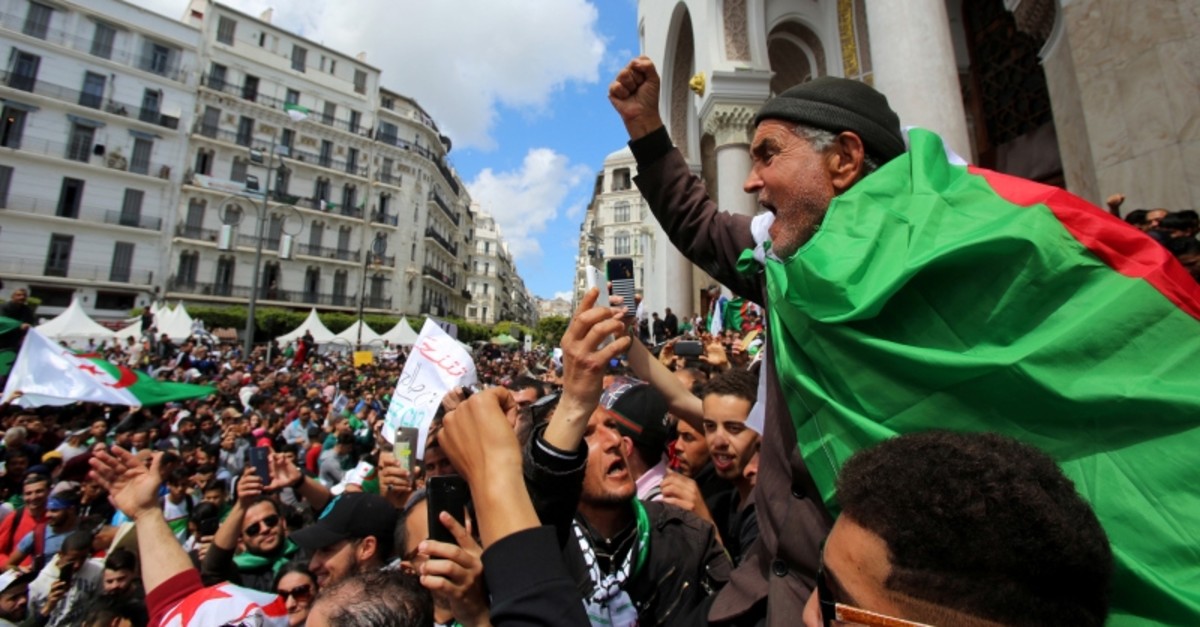 A man gestures during a protest against the appointment of interim president Abdelkader Bensalah demanding radical changes to the political system, in Algiers, Algeria April 10, 2019. (Reuters Photo)
by Compiled from Wire Services Apr 10, 2019 8:32 pm

Algeria will hold a presidential election on Thursday, July 4, a statement from the presidency said Wednesday.

Abdelkader Bensalah was appointed on Tuesday to replace former President Abdelaziz Bouteflika, who was pressured by massive protests to step down after two decades in office. Protests have continued, however, with people on the streets demanding that he, the government and all those linked to Bouteflika's reign should also leave.

The interim leader appeared to be working to get ahead of the curve by quickly setting an election date for what is supposed to be a fully transparent democratic process.

The choice of the date seemed chosen to pass a message of the birth of a new era for gas-rich Algeria, which gained independence from France in 1962 after a brutal, seven-year war.

Those in power since independence are part of that generation — many like Bouteflika fighters in the war. However, Algerian youth, who dominate the population, want to look ahead, not behind.

Thousands of protesters were in the streets again Wednesday. Union officials from an array of sectors organized work stoppages.

Hundreds filled the square in front of the Grande Poste, the capital's central post office that has become synonymous with the protests. Lines of police in riot gear stood by, backed by a water cannon.

In a much-anticipated speech, however, Algeria's powerful army chief who was instrumental in Bouteflika's downfall, backed Bensalah, saying the nation's institutions must be preserved during the changeover.

Gen. Ahmed Gaid Salah also said the military will watch over the process of transition, but suggested it doesn't want to intervene.

Gaid Salah, speaking at a regional military headquarters in Oran, said it is "unreasonable" to organize elections in the three-month transition period allotted by the constitution without institutional guidance, such of that of Bensalah.

He also said the judicial system would pursue corruption cases and resurrect those that had been dropped.

He warned anew of an alleged foreign hand he contended is promoting certain individuals to run the transition and manipulating protesters to destabilize the nation and "seed discord among the children of the people ... aimed at leading the country to a constitutional void."

Gaid Salah did not say who he alleged was interfering, but referred to "certain foreign parties, considering their historic record" — a likely veiled reference to former colonial power France.

From the start of the nation's political crisis, the army has "categorically rejected" intervening, Gaid Salah said.

He pleaded for "patience ... and lucidity" to ensure peace and form the basis for a "state of law and institutions."