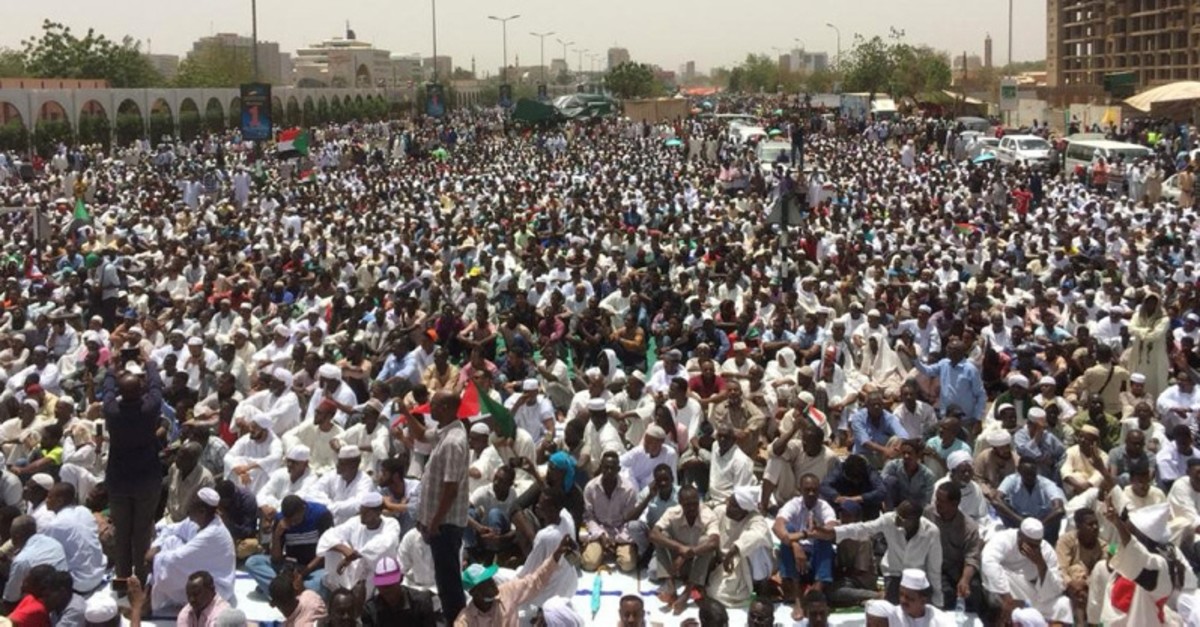 Sudanese protesters gather near the military headquarters in Khartoum as they continue to rally demanding a civilian body to lead the transition to democracy one day after a military council took control of the country, on April 12, 2019. (AFP Photo)
by Compiled from Wire Services Apr 15, 2019 12:21 pm

Sudan's Rapid Support Forces (RSF) reportedly attempted on Monday to break up a sit-in staged by protesters outside the army headquarters in Khartoum.

Military bulldozers and tractors moved to remove roadblocks erected by protesters near the headquarters but were forced back by protesters, according to eyewitnesses.

"The RSF and army forces claim they seek to remove the roadblocks to clean the area but the protesters refuse," a demonstrator tasked with protecting the camp, who preferred to remain unnamed, told Anadolu Agency.

Troops had gathered on three sides of the sit-in, but protesters joined hands and formed rings around the sit-in area to prevent them.

The protesters, numbering about 5,000 with more arriving, chanted "Freedom, freedom" and "Revolution, revolution," and appealed to the army to protect them, Reuters reported.

Demonstrators have staged a sit-in outside the main army headquarters as part of protests against longtime President Omar al-Bashir, who was ousted by the military last week after three decades in power.

Demonstrators, however, have refused to end their sit-in, calling for the transfer of power to a civilian government.

For its part, the Sudanese Professional Association (SPA), which spearheaded protests against al-Bashir, called on supporters to converge on the protest camp outside the army headquarters.

"We appeal to all to move immediately to the protest camp to protect the revolution and its gains," it said in a statement.

The sit-in outside the compound, which also includes the intelligence headquarters and the presidential residence, began on April 6, after more than three months of protests triggered by a deepening economic crisis.

On Thursday, Sudan's army announced that it had removed and detained Bashir and was setting up a transitional military council to run the country.

Since then the head of the military council and of Sudan's powerful intelligence services have both been replaced, as protesters have continued to call for change.

The SPA said the resulting transitional government and the armed forces must bring to justice both Bashir and officials from his feared National Intelligence and Security Service (NISS).

The United States, Britain and Norway urged the military council and other parties to hold talks over the country's transition to civilian rule.

In a joint statement by their embassies on Sunday, they warned against any use of violence to break up the protests, and said the "legitimate change" the Sudanese people demanded had not taken place.

"It is time for the transitional military council and all other parties to enter into an inclusive dialogue to effect a transition to civilian rule," they said.

"This must be done credibly and swiftly, with protest leaders, political opposition, civil society organizations, and all relevant elements of society, including women."

The military council on Sunday met with political parties and urged them to agree on an "independent figure" to be prime minister, an AFP correspondent at the meeting said.

"We want to set up a civilian state based on freedom, justice and democracy," a council member, Lieutenant General Yasser al-Ata, told members of several political parties.

A 10-member delegation representing the protesters delivered a list of demands during talks with the council late Saturday, according to a statement by the Alliance for Freedom and Change umbrella group.

But in a press conference later, the council's spokesman did not respond to the protesters' latest demands, although he did announce the appointment of a new intelligence chief of the NISS.

Protest leaders have called for the feared intelligence agency, whose chief Salah Gosh resigned on Saturday, to be restructured and for NISS officials to face prosecution.

The foreign ministry said the military council's chief General Abdel Fattah al-Burhan was "committed to having a complete civilian government" and urged other nations to back the council in order to achieve "the Sudanese goal of democratic transition".

He also pledged that individuals implicated in killing protesters would face justice and that protesters detained under a state of emergency imposed by Bashir during his final weeks in power would be freed.

The SPA also demanded the confiscation of properties belonging to al-Bashir's National Congress Party and the release of soldiers who sided with their "revolution."

Late on Sunday, the military council said it has set up a committee to register NCP properties and take control of them.