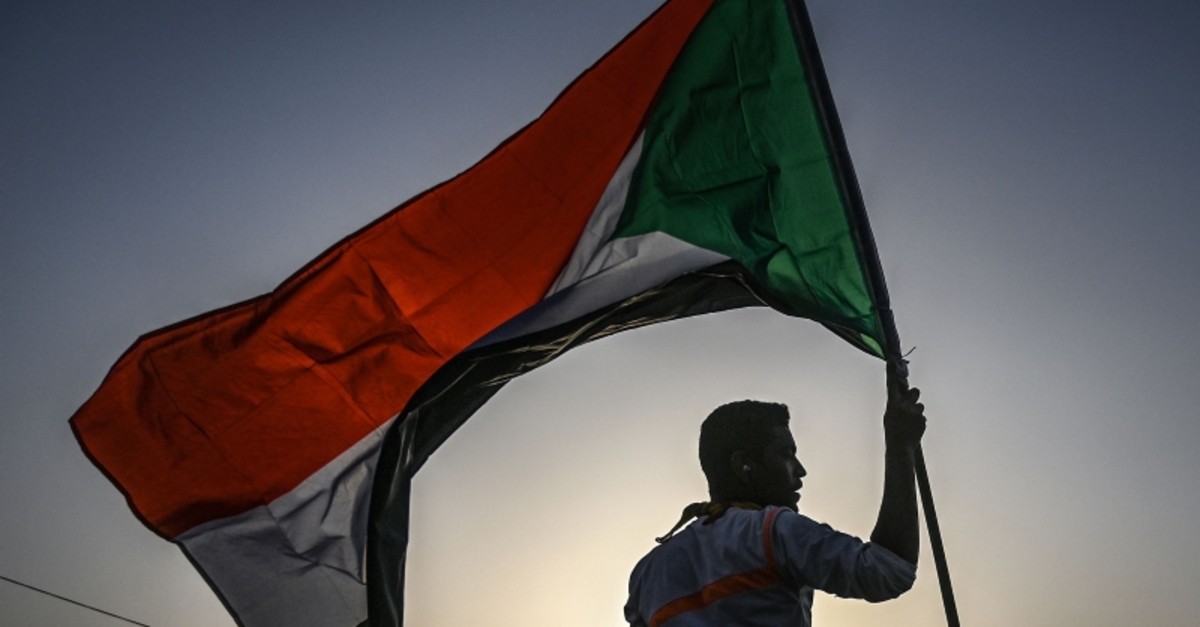 A Sudanese protester waves the national flag during a rally outside the army complex in Sudan's capital Khartoum on April 18, 2019. (AFP Photo)
by Compiled from Wire Services Apr 19, 2019 1:54 pm

Protest leaders Friday announced plans to unveil a civilian body to take over from Sudan's ruling military council as crowds of demonstrators kept up the pressure outside army headquarters and Washington said it will send an envoy to encourage the transition.

The military council, which took power after ousting Sudan's longtime leader Omar al-Bashir on April 11, has so far resisted calls from protesters to quickly make way for a civilian administration. The military set up a military council to run the country for a maximum of two years.

The protesters fear the army, dominated by al-Bashir appointees, will cling to power or select one of its own to succeed him.

The Sudanese Professionals Association, which has been spearheading the protests, said in a statement that the civilian council members would be named at a news conference at 1700 GMT on Sunday outside the army complex to which foreign diplomats are also invited.

"We are demanding that this civilian council, which will have representatives of the army, replace the military council," Ahmed al-Rabia, a leader of the umbrella group of unions for doctors, engineers and teachers, told AFP.

Activists mobilized demonstrators through social media to keep up the pressure for replacing the military council, now led by General Abdel Fattah al-Burhan.

"I won't leave until Burhan transfers power to a civilian government," said Wali Aldeen, who has camped outside the complex since the day Bashir was ousted.

Activists have called for large crowds to gather after weekly Muslim prayers, as on previous Fridays.

'Military out of center-stage'

Protests first broke out on December 19 in response to the tripling of bread prices, swiftly turning into nationwide rallies against al-Bashir's three-decade rule.

After his ouster, protesters demonstrated against General Awad Ibn Ouf who took over as the first head of the military council, insisting he was a tool of the old regime.

Ibn Ouf stepped down in less than 24 hours and was replaced by Burhan, who so far has appeased protesters by lifting a night-time curfew and vowing to "uproot" Bashir's circle.

The United States on Thursday praised orders by Sudan's new military leader to free political prisoners and end the curfew as it dispatched Makila James, a deputy assistant secretary of state, on a mission to Khartoum this weekend.

The United States will "calibrate our policies based on our assessment of events." State Department spokeswoman Morgan Ortagus said, adding however that talks on delisting Sudan as a state sponsor of terrorism remained suspended.

"We are encouraged by the decision to release political prisoners and cancel the curfew in Khartoum," Ortagus said in a statement.

She said that the United States wanted the military council and other armed units to "show restraint, avoid conflict and remain committed to the protection of the Sudanese people."

"The will of the Sudanese people is clear: it is time to move toward a transitional government that is inclusive and respectful of human rights and the rule of law," she said.

A senior U.S. official, speaking on condition of anonymity, said Washington's short-term goal was to "get the military folks out of center-stage" and "back to being responsible for security, nothing else."

"Longer term is to make absolutely sure that whichever group is going to be responsible for the transition prepares a transition implementation that will lead to a truly democratic government that will reflect the will of the Sudanese people," he said.

The official did not specify whom James would meet in Khartoum but said, "the US engages with everyone."

Al-Bashir's downfall through a military coup was the second time this month that a leader in the region has been forced out after mass demonstrations, after Algeria's Abdelaziz Bouteflika.

The country's ruling Military Transitional Council (MTC) appears to be maintaining pressure on figures affiliated with the regime of al-Bashir. The former president's two brothers, as well as a number of his close associates and former government officials were taken into custody.

Al-Bashir is currently held in Khartoum's Koper Prison, notorious for holding political prisoners under his term.