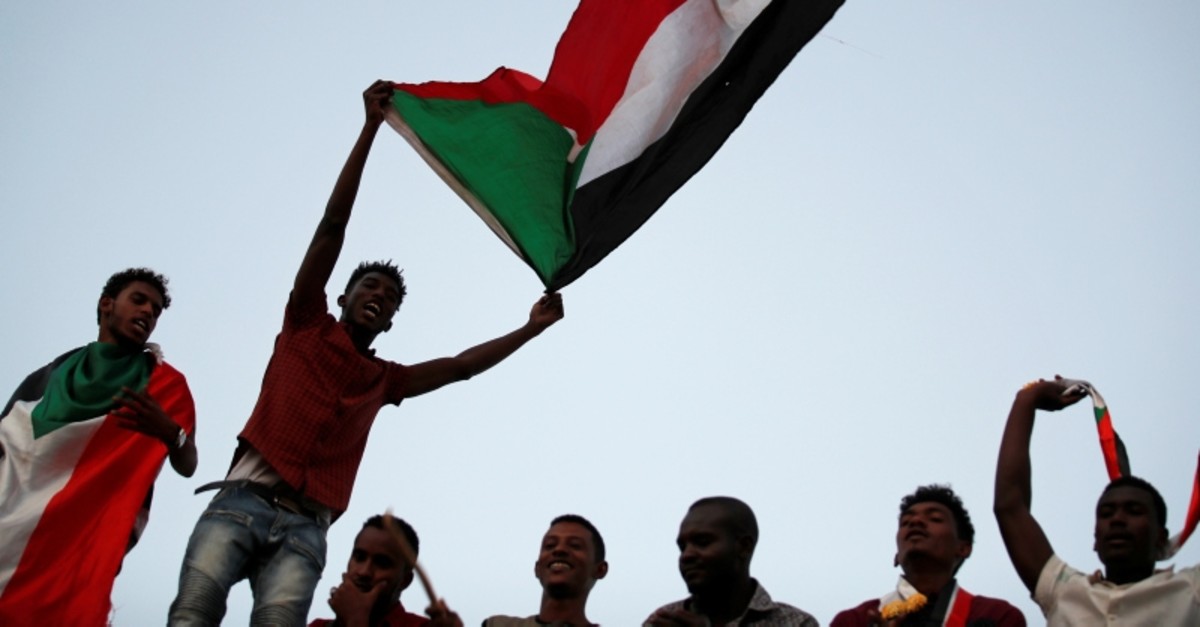 Sudanese protesters wave national flags and shout slogans as they gather for a mass protest in front of the Defence Ministry in Khartoum, Sudan, April 21, 2019. (Reuters Photo)
by Compiled from Wire Services Apr 21, 2019 11:32 pm

The head of Sudanese Military Transaction Council (MTC) Abdel Fattah Burhan on Sunday confirmed that the country's deposed president Omar Bashir and the leading figures of his regime were all in prison.

"All the leading figures of the former regime, including Bashir and the commanders are all in prison and their property was confiscated," Burhan said in an interview with the Sudanese state television.

The commander pointed out that there is no political prisoner in the country and the senior figures in the security and intelligence service were made to retire after being investigated.

The MTC would question anyone who committed crimes before or during the recent demonstrations, he added.

With regard to the political forces' demand to transfer the power to a civilian government, he vowed to accelerate the "transition of power to the civilians."

Burhan said: "We didn't come with a coup, but with a popular revolution and we do not intend to stay in power."

Burhan said he prefers a technocrat government to be formed soon.

"Restructuring the state will take a long time due to the corruption problem within the state institutions," he added.

The Sudanese military had deposed Bashir, who has ruled Sudan since 1989, following months of popular protests against his rule.

The military also established a military council to run the country for a transitional period of two years.

The organizers of Sudan's protests said Sunday they have suspended talks with the ruling military council because it has failed to meet their demands for an immediate transfer to a civilian government.

Mohammed al-Amin Abdel Aziz, a spokesman for the Sudanese Professionals Association, said Sunday that the political committee of the military council is too close to Bashir.

"The military council is delaying its response to our proposals, saying that they are considering proposals from all political forces," he said.

He said the SPA is calling for more protests, and repeated its demand for an immediate transfer to a transitional civilian government that would rule for four years.

The SPA led four months of protests that eventually ended Bashir's 30-year reign, which was marred by multiple armed conflicts and widespread corruption. The umbrella group of unions says around 100 people were killed by security forces since December, when the protests were sparked by a hike in the price of basic goods.

The protesters fear the military — which is still dominated by Bashir appointees — will cling to power or appoint another general in his place.

Mohammed al-Asam, a senior member of the SPA, told The Associated Press late Saturday that "we are ready with a clear plan for a transition with qualified names."

The association had said it would announce the names at a news conference Sunday outside the military's headquarters in Khartoum, where thousands of protesters have kept up a sit-in since April 6. It was not immediately clear whether the announcement had been canceled or delayed.

"We want a civil council immediately with a military representation. This is our demand," said al-Asam, who was detained for more than three months before being released after Bashir's ouster. He was held in the Koper prison in Khartoum, where Bashir and other top officials now reside.

The 28-year-old doctor urged the international community to press the military to hand over power to civilians. He said the military council is becoming more powerful every day and that "this is dangerous to the revolution."

Burhan said the military council will send a delegation to the United States later this month for talks on removing Sudan from the U.S. list of state sponsors of terror, a designation that dates back to the early 1990s, when the country briefly hosted Osama bin Laden.

"We expect a breakthrough in this issue," he said.

The military has also reached out to the African Union, saying it is working to "create an environment so political forces can rule in a peaceful and democratic way," according to the state-run SUNA news agency.

The African Union on Monday gave Sudan's military 15 days to hand over power to a "civilian-led political authority" or face suspension from AU activities. The AU said a civilian authority should hold elections "as quickly as possible."

Saudi Arabia and the United Arab Emirates meanwhile announced a $3 billion aid package for Sudan. The Saudi state-run news agency said Sunday that $500 million would be deposited in Sudan's central bank, while the remaining amount will be used to purchase food, medicine and fuel.

Burhan said authorities recently searched a presidential residence, where they found more than 7 million euros ($7.8 million) and $350,000 in U.S. currency. The protesters have accused Bashir and his family of pillaging state resources during his three decades in power.